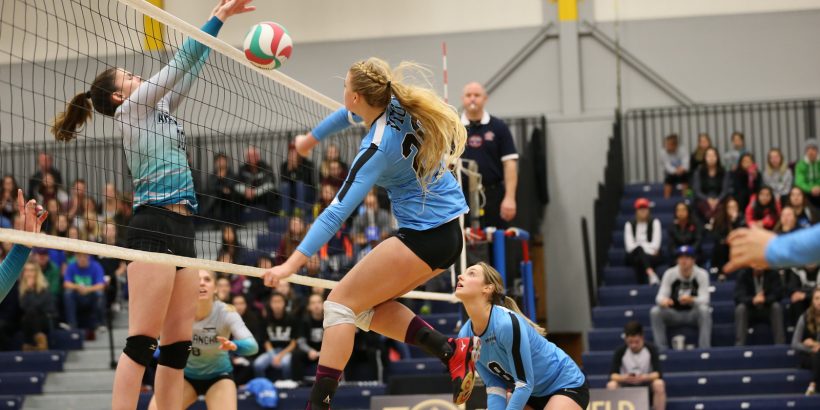 Mid Natalie Crews goes in for a spike. Photo by Northfield Photography.

Above: Mid Natalie Crews goes in for a spike. Photo by Northfield Photography.

The VIU Volleyball home opener got off to an emotional start with the raising of the 2015-16 CCAA National Women’s Volleyball Championship banner.

Fired up by last year’s success, the Mariners women took to the courts against the College of the Rockies Avalanche. They came out strong, taking the first set 25–18. In the second set, the Mariners replicated their success, controlling the court with formidable defense and precise serves to end the second set 25–15. The Avalanche attempted to claw their way back in the third, but ultimately fell to the Mariners 25–23, allowing the Mariners success in three straight sets.

Moving forward, the Mariners are focused on further developing their skills to continue their success.

“As much as we were crisp tonight, and we played pretty well, I think we let off the gas a little bit in the third set,” said Hyde. “I want to be able to substitute anybody in and not really change the flow we have. I’m excited we are continually improving.”

The Mariners men stormed the court amid booming fanfare, firing up the confident crowd.

“It was nice to get the bugs out at the start and see some of our veteran guys control the pace,” said Head Coach Abe Avender. “I think Zach Grigg had one of the best games I’ve ever seen him play, he was really impressive. Ryan Evans our setter put on a good show. I think everybody on that starting seven guys contributed in a good way.”

“One thing I always try to take pride in with this group is having a routine with everything. Today’s over, it’s a new day tomorrow. Gotta get back at it with food, water, rest, and that kind of stuff so we can continue to build on where we’re going and where we hope to be at the end of the year, hosting provincials here.”