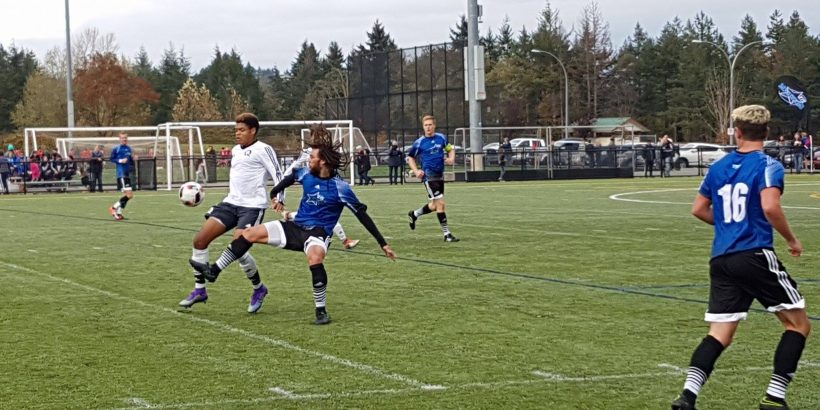 Above: Jordan Lindsay steals the ball. Photo by Cole Schisler.

On Saturday October 22, the Mariners hosted the Capilano Blues for their second-to-last home game at Merle Logan Field.

The second half was hard fought; however, the Mariners were unable to capitalize on their scoring opportunities. The Blues scored a third goal at the 60-minute-mark, and ended the match with another goal, defeating the Mariners 4–1.

On Sunday, the Mariners face the Quest Kermodes in their final home game of the season.

Following a ceremony to honour graduating Mariners, the Mariners took the field against the Kermodes with high energy. The Mariners were strong in the first half, playing aggressively and pressing the Kermodes’ defense. Neither team could find the net by the end of the first half. At the 65-minute-mark in the second half, Mariners’ midfielder Taylor Arbour scored the sole goal of the game, allowing the Mariners to win 1–0.

“We kept our composure, which is a big thing for us going into provincials,” said Head Coach Bill Merriman. “We still need to finish our chances. We create so many chances and we’re not getting enough goals.”