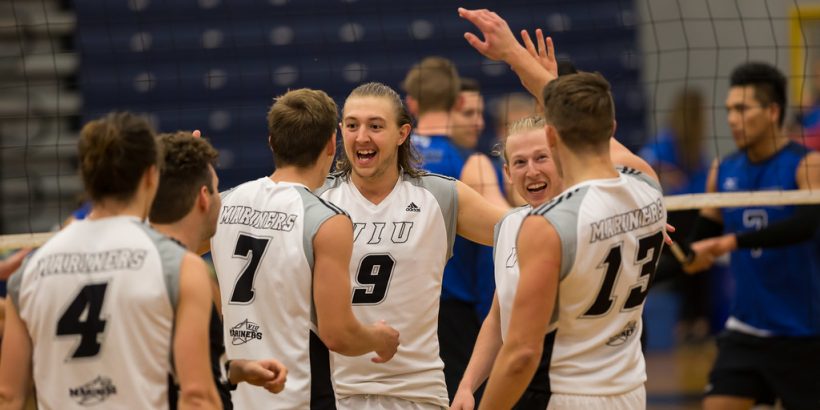 Above: Wayne Woyciehouski celebrates a point with his team. By Northfield Photography.

On Friday October 21, the VIU Mariners faced off against their PACWEST rivals, the Camosun Chargers for an exciting volleyball weekend.

The second set was a much closer battle in which both teams struggled for the lead. Early in the second, the teams were tied 8 a piece, and would go on to be tied 16–16 later in the set. Mariners’ middle Wayne Woyciehouski broke the tie with a devastating block, and the Mariners were able to increase their lead 22—19 by the next timeout. The Mariners took the second set 25–20 over the Chargers.

The Mariners held their lead throughout the third set. After a series of successful serves, the Mariners had a large lead of 21–13 toward the end of the set. They won the set 25–17, taking the match in three straight sets.

On Saturday October 22, the Mariners traveled to Camosun College to take on the Chargers in a rivalry rematch.

The Mariners are undefeated with a 4–0 record and are tied for first place in the PACWEST rankings with Douglas College. They will travel to the Columbia Bible College in Abbotsford on November 4 to take on the Bearcats.