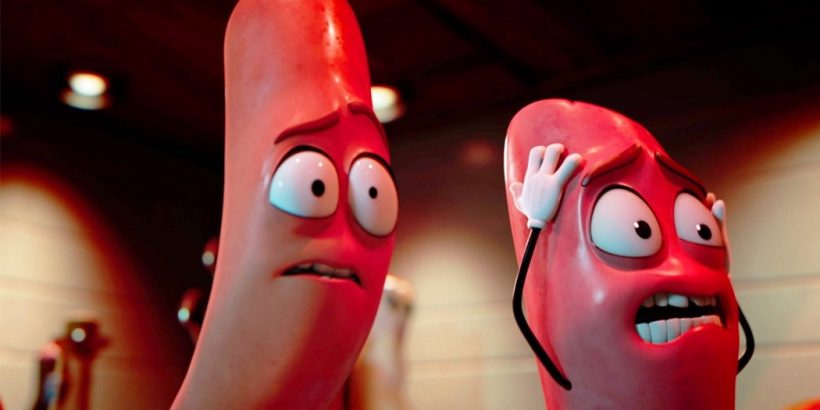 Above: Photo via christianitytoday.com

Here’s something completely different for those of you who have grown tired of my endless ramblings about horror and science fiction. Instead, let’s look at a juvenile, gross, problematic, and absurd little movie called Sausage Party. For those who haven’t heard, Sausage Party is an animated film that takes place in a grocery store and follows the story of Frank, a sausage, on a journey to find the truth of his, and his fellow groceries items’, very existence. In essence, their very lives are based on the idea that if they stay fresh and pure, they will be chosen by the “gods” and taken to “the great beyond.” I hope that by now, you’ve figured out exactly the point being made in this film.

Sausage Party was brought to you by the same minds responsible for Knocked Up, This Is The End, 50/50, and The Night Before, and contains most of the kind of things you’d expect. It’s packed with food puns, ethnic stereotypes, gross-out shock humour, and, of course, different kinds of food having sex with each other. Throw in some cracks about bath salts, a talking discarded condom, and a huge food orgy, and you’d be more than forgiven for thinking that the movie was trash on its face. Hell, from seeing the trailers, I was prepared to write this movie off as a terrible excuse for a notorious crew of guys to be gross and offensive.

In thinking this way, I managed to completely forget that these guys are also known for producing genuinely funny, honest, and entertaining movies, and there was no reason not to think they would bring this same sensibility to this one. I mean, these are the same people who made me cry watching 50/50, so it makes sense that this wouldn’t be a completely incompetent movie, at the very least. Now, please don’t misunderstand me here, this movie is exactly what you think it is. But if you dig deeper, you’ll find that–strangely enough–this movie has something to say.

The big theme present in this movie is religion, or more specifically it’s about the problems and absurdities present in religion. It’s really a love letter to atheism or agnosticism—maybe both. It spends time presenting the groceries’ religious beliefs sarcastically through a song that they all sing in the beginning of the movie. It’s not subtle about what it’s trying to say, and it doesn’t make you work hard to see the message, if you look for it. You can predict how things go, with Frank realizing that everything is a lie, and the food rising up against the Gods. I’d apologize for spoiling it, but I don’t really feel bad.

It’s important to recognize that Sausage Party is a parody—a send-up of the Pixar brand of family film. One review in particular by a YouTube personality called MovieBob talks about how Sausage Party takes on all the elements that Pixar completely avoids in its films, particularly when it comes to “sex, and body functions, and concepts of race and gender, as it relates to the humanity of the characters”, essentially taking the anthropomorphism of animals and objects all the way to the edge of that idea. If you’re willing to look even deeper (according to the same reviewer), Sausage Party also points out the absurdity of the way in which we attach racial or gendered identities on to food products.

Sausage Party harkens back to the early days of South Park, back when they were getting nominated for Academy Awards, and using shock humour to make their points. This movie does this in much the same way, and ultimately it works—and no one was more surprised by this than me. A scene in particular that sold me on the whole film is a recreation of the opening scene of Saving Private Ryan, when a jar of honey mustard throws itself from a shopping cart after learning the truth about the destiny of food, resulting in chaos and death.

I’m not going to pretend this is the funniest movie I’ve ever seen, or even close, but it works really well as a parody of Pixar films and as a commentary on religion and the results of keeping a group of people (or… groceries) oppressed for a long time. The tension release that comes at the end of the film is a violent revolution, and one that it’s hard not to imagine is possible even just looking at our own current social climate.

At this point I can’t believe I’ve written more than 800 words about a movie whose villain is a literal douche, and features Selma Hayek as a taco dealing with accepting her sexual identity, but apparently that’s where we are now. Sausage Party is gross, and loaded with problems, but it’s not nearly as repugnant and stupid as I expected it to be. With performances from people who are genuinely funny too, like Seth Rogen, Kristen Wiig, Michael Cera, Jonah Hill, and Bill Hader, it’s not a huge surprise that the movie is funny, but it is a huge surprise that it worked the way it did.

I’d say check it out, but know that your assumptions about it are also correct. If that helps you make your decision at all.