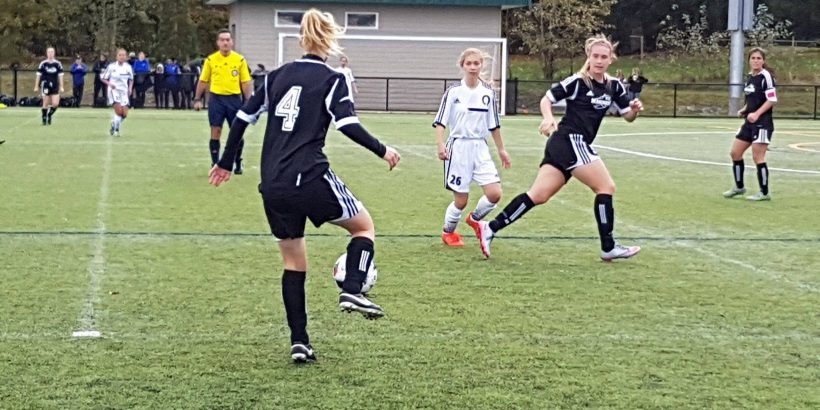 Above: Darby Cronan prepares to pass. By Cole Schisler.

On Saturday October 22, the Mariners hosted the Capilano Blues for their second last home game of the season.

After a hard fought first half, Mariner’s forward Karen Battie opened the scoring against the Blues early in the second half. The Blues came close to tying the match, but Mariners’ keeper Emily Rowbotham dashed their hopes with a diving save to keep the Mariners in the lead. At the 85-minute-mark, Mariners’ forward Moira Brown tacked on another goal off the cross bar to close out the match 2–0 for the Mariners.

On Sunday, the Quest Kermodes came to town for the final home game of the Mariners season.

The Mariners came out strong, setting the pace of the match early with a goal from forward Katie Rodgers at the 16-minute-mark. Five minutes later, Mariners’ midfielder Kaylee Dodds scored off a penalty kick, making the score 2—0. The Mariners controlled the ball throughout the first half and created turnovers, which resulted in a third goal off a corner kick by Carli Rey at the 36-minute-mark to close out the first half.  Early in the second half, Mariners’ midfielder Maddy Dawson put the nail in the coffin, giving the Mariners a comfortable 4–0 win over the Quest Kermodes.

“We played a solid 90 minutes,” head coach Anup Kang said. “We took our chances really well and that’s something we’ve worked on all year.”

Looking back on the season, Kang is proud of the effort the Mariners have put in over the season.

“Even when things weren’t going our way, they really stayed focus on the task at hand. It’s a veteran group, I think we’ll be fine going into provincials.”