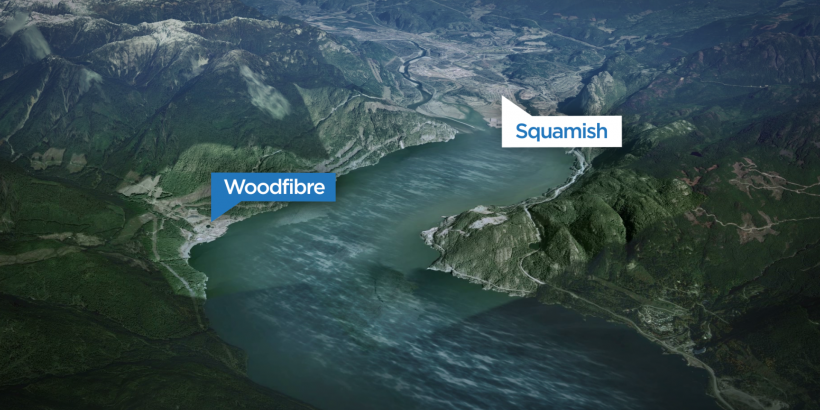 Above: Location of Woodfibre LNG plant. Photo via Global News.

A few weeks ago, a friend on Facebook posted a photo of the new Woodfibre LNG and FortisBC Community Office in downtown Squamish, with the caption: “Whoever guessed an #LNG office that facilitates the exportation of fracked gas and global warming could be so ‘community’ oriented?”

The buzz around the new liquefied natural gas (LNG) plant in Howe Sound has been a divisive issue in my little hometown. A group called My Sea to Sky has collected nearly 9000 signatures on a petition against the project and hundreds have voiced their dissatisfaction at town hall meetings. “Yes to LNG” and “No to LNG” groups have emerged on Facebook, protests appear around town, letters to the editor from both sides run in the local paper on the reg, and, of course, there are plenty of spicy debates fired up on this issue in supermarket lineups and pubs.

Tourism and environmental advocates push against it, while those in favour of the economic gains and the improvements over using other fossils fuels try to sway them.

The LNG market has morphed drastically in the last decade as predictions of a bountiful future for LNG in North America arose. Once focused on importing LNG into North America, Canada has shifted its industry to exporting LNG instead. The worldwide competition for investment into natural gas has created a small, high-pressure window of opportunity for Canada to capitalize on it.

As a relatively “clean-burning” fossil fuel, natural gas has become expected to play an ever more important role in the worldwide energy demand. Since energy demand is expected to increase over the long-term, global LNG production is also expected to grow. The significant job prospects and economic growth have made developers’ eyes light up like an extraction plant against the night sky.

At around 4 am on November 3, a blaze in the Woodfibre LNG office in downtown Squamish also lit up the night sky. Police quickly confirmed that the fire was arson.

The next day, Premier Christie Clark and Woodfibre LNG announced the proposed LNG development in Howe Sound would proceed.

This milestone announcement of the $1.6 billion development has slowly gained approval at the provincial and federal levels since its plan was officially proposed in 2015. If all permits are secured, it will process natural gas shipped by pipeline from Northern BC into LNG and is licensed to export about 2.1 million tonnes of LNG annually.

With gas shipment to Asian markets expected to begin in 2020, Clark says the development will create 650 jobs during construction and 100 operational jobs over its estimated lifespan of 25 years.

The Squamish Nation has been involved in the project’s planning and put forth an Environmental Assessment with 25 conditions that were to be met before it was approved. But Squamish Nation Chief Ian Campbell was absent from the announcement; he told the Squamish Chief newspaper that the Nation’s work is not yet complete and the conditions have not all been met yet.

District of Squamish Mayor Patricia Heintzman told the Squamish Chief she found out about the decision through the media and said it seemed to be “a little disrespectful” that the Nation’s process had been deterred.

“The project has been and will continue to be a controversial proposal in Squamish,” Heintzman said in a statement released on the district’s website November 4. “We, as a community, have extremely high expectations regarding the safety of our community, the safety of our waterways, and the protection of our environment.”

Woodfibre LNG is one of approximately 20 LNG proposals in BC on the drawing board. On September 27, Pacific Northwest LNG, a $27 billion project to be built on Lelu Island on BC’s north coast, secured federal approval with 190 conditions and is now being reviewed for final authorization.

This project has also been met with deep concerns from Aboriginal and environmental groups that it would destroy a critical salmon habitat and produce a large amount of greenhouse gases; in response these groups have filed lawsuits towards the government to overturn the project’s permit.

Pacific Northwest LNG has pointed out that it has consulted with five Tsimshian First Nations–the Metlakatla, Kitselas, Gitxaala, Kitsumkalum and Lax Kw’alaams. Four of those have signed term sheets intended to lead to impact benefit agreements, but the Lax Kw’alaams First Nation has refused to agree.

Environment Minister Catherine McKenna has defended the approval, claiming that the environmental impact will be minimal and the economic gains abundant.

“This project underwent a three-year rigorous and thorough science-based process that evaluated and incorporated mitigation measures that will minimize the environmental impacts,” McKenna said in a statement issued by her department and the Canadian Environmental Assessment Agency. “The only way to get resources to market in the 21st century is if they can be done in a responsible and sustainable manner. This decision reflects this objective.”

But, despite the campaign promise and federal goal to reduce Canada’s greenhouse gas emissions, the Canadian Environmental Assessment Agency (CEAA) states the greenhouse gas emissions would in fact be significantly increased, thus contributing to climate change. The CEAA has also ruled that the LNG proposal would likely harm harbour porpoises, but the agency sees low ecological risks to salmon as long as mitigation measures and monitoring programs are carried out.

The promise of such measures being met is not enough for some Prince Rupert locals though; the major concern to Aboriginal and environmental groups is the threat that surrounds a sandbar next to the proposed export site called Flora Bank. Chris Tollefson, one of the lawyers representing SkeenaWild, told The Globe and Mail the CEAA did not properly assess and report on how the terminal would affect juvenile salmon habitat on Flora Bank.

“This is really the cradle for the salmon,” The Globe quoted Tollefson. “When you alter or destroy the habitat, you really don’t know what is going to happen.”

The Provincial and Federal Government state that LNG is in fact part of a strategy to combat climate change as projects begin to incorporate green technology, such as offering tax breaks for those plants that use electric drives for compression. Natural gas also burns cleaner than other fossil fuels like oil and coal, and emits less carbon dioxide for the amount of energy it produces. This has led the industry and governments to argue for an increase in natural gas production and claim it is the right next step. The thinking is that LNG acts as a “kick-start” fuel to begin reductions in the greenhouse gas emissions responsible for climate change.

“It’s not that simple, though,” environmental activists David Suzuki and Ian Hanington write on davidsuzuki.org. “Especially when we consider the impacts of unconventional natural gas, along with extraction methods such as hydraulic fracturing, or ‘fracking’.”

Fracking uses sand, enormous amounts of water, and chemicals pumped at high pressure into rock formations deep in the Earth to fracture the rock, allowing the gas to escape and flow into wells. Companies have not been required to disclose what chemicals they use, even if they are toxic and, in some cases, the process can also release methane, a greenhouse gas more powerful than carbon dioxide, into the air, Suzuki claims. In addition, the immediate construction of these huge plants disrupt large areas of fragile ecosystems.

These are all non-climate environmental impacts of LNG extraction; in regards to climate change itself, there are several concerns in the bigger picture. While LNG is cleaner than oil and coal, burning it still produces greenhouse gas emissions, like any industrial activity. But LNG plant production also takes away progress and investment into renewable energy sources such as solar, wind, tidal, and geothermal power.

BC’s reserves of natural gas are increasingly diminishing, so what will we do when it’s gone? Offering tax breaks to an industry that is indeed harming the environment acts as a simple distraction from the inevitable. Instead of putting time, money, and research into safer, efficient, renewable sources, we are riding a wave that will soon crash in favour of immediate gains.

Suzuki acknowledges that LNG will exist in our immediate future; he says we must continue to push for renewable energy but also do what we can to hold LNG accountable for its effects while it is here.

“Because natural gas will be with us for the foreseeable future, we must clean up practices associated with it as well,” Suzuki writes. “The report [by the David Suzuki Foundation and Pembina Institute, ‘Is natural gas a climate change solution for Canada?’] recommends requiring industry to disclose the chemicals used in fracking and calls for better regulation and monitoring. Right now, natural gas is exempt from normal provincial environmental assessment processes. Clearly, that must change.”

The Haida Nation from Haida Gwaii are among the other First Nations opposed to the Pacific Northwest LNG terminal and Justin Trudeau wears a tattoo on his shoulder by Robert Davidson, one of the country’s top Haida artists. In Maclean’s piece “Skin-deep: The awkwardness of Justin Trudeau’s Haida tattoo,” Davidson says he was proud of this when Trudeau promised a better relationship with Indigenous populations and the environment during his campaign. But the natural gas development despite Indigenous disputes is one of several issues that have caused disappointment to replace that pride.

“In accepting a tattoo, you commit to the values and laws that govern our nation,” Maclean’s quotes Davidson. “Maybe Trudeau really needs to understand what that tattoo signifies to the Haida… how do we react to what he’s doing, to the decisions he’s making?”

How do you react? And does your reaction really mean anything?

When I go home to Squamish in a few weeks for the winter break, I will likely see the fuming Facebook posts and debates come to life. People will stick up for the orcas and porpoises that frequent the Sound, the ozone layer, the marine plants, fish, their own health, and even the view from the Sea to Sky Gondola.

Others will brush them off for the job prospects at hand. For example, my dad, a pipe-fitter, is living near Delta Monday to Friday and working on the Tilbury LNG Facility Expansion Project. It’s given him a favourable alternative to the depressing worker’s camp in Fort McMurray he’s lived in for years, where the increased lay-offs are reflecting the dramatic decline of “that dirty oil money.” I can’t help but imagine what it would be like for him if there were a job like that available to home so close to home.

But the argument that the immediate economic gains outweigh the environmental risks falls weak, as it ignores our other options. For example, China—one of the most polluted countries in the world—has become a global leader in renewable energy production, alongside many successful countries in Europe. Instead of pushing the trouble of researching and developing these methods onto the next person in line, we should be acting now to secure the future. Jobs will still be created, more people will have access to power, and we won’t have to worry about running our sun or wind dry of fuel.

Yet, in the carousel that is politics, pipe dreams run the show, leading to the repeated conclusion that instant economic benefits outweigh our planet. It seems the hope for change is a pipe dream itself. 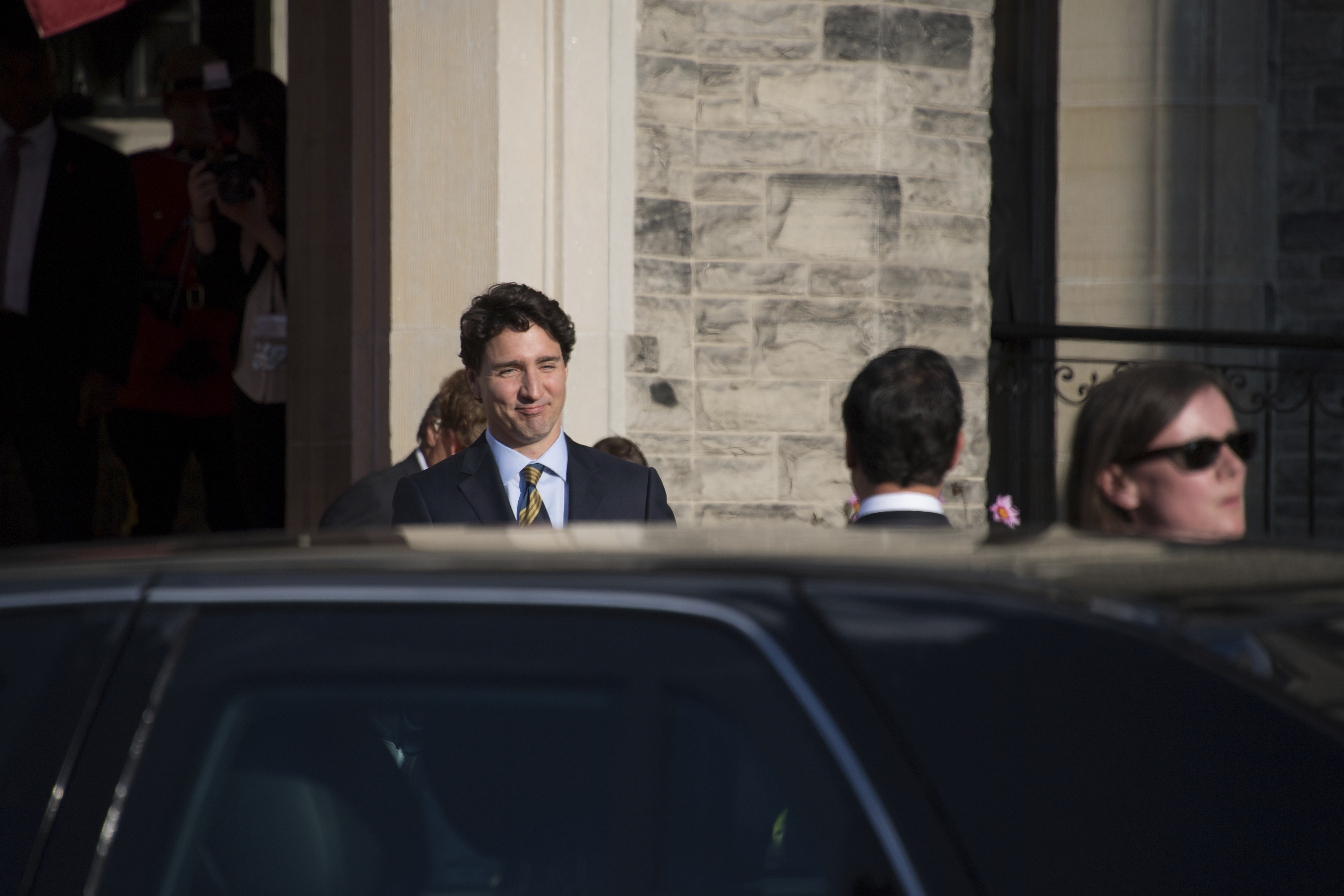