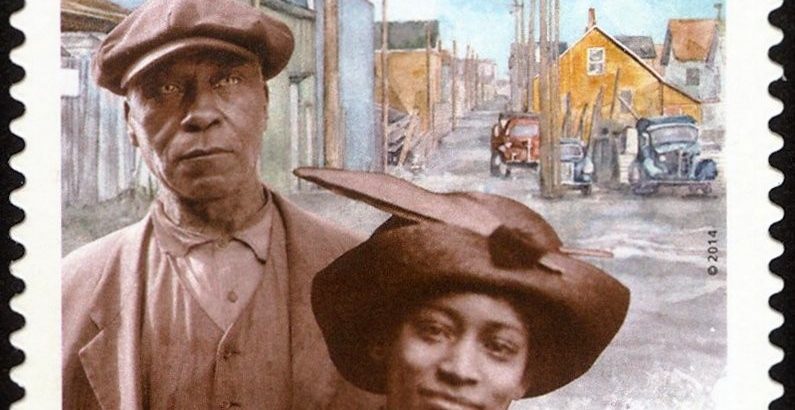 Hogan’s Alley was a neighbourhood in downtown Vancouver. It was home to many immigrant communities, but it is best remembered for the African-Canadian population that had established itself by 1923. In its heyday Hogan’s Alley was a focal point for black culture, known for its restaurants and home to the African Methodist Episcopal Fountain Chapel.

Perhaps its most famous resident was Nora Hendrix, the grandmother of the musician Jimi Hendrix. Then in 1967, in line with the urban renewal and “slum clearance” thinking of the time, the City of Vancouver began levelling the western half of the neighbourhood to make way for a freeway. Over time the black community was displaced.

In a 2004 collection of poems entitled Performance Bond, Vancouver-born poet, essayist, DJ, and historian Wayde Compton investigated the destruction of Hogan’s Alley. This was not a typical book of poetry. For one thing, it included a CD. Also, as The Georgia Straight reviewer Jim Christy noted, “This package contains spoken poetry, written poetry, reproduced photographs, excerpts from oral-history transcriptions, a playlet, even a news paper clipping. The concept of Performance Bond is exciting. Fuse all these elements and thus render a portrait of the artist; after all, we are all assemblages. Wayde Compton, a ‘Halfrican’, is even more of an assemblage, being of mixed race.”

This work by Wayde Compton is the subject of a presentation by Paul Watkins, a VIU faculty member from the English Department. The talk is entitled “Hogan’s Alley Remixed: Learning through Wayde Compton’s Poetics” and will take place at VIU’S Malaspina Theatre November 25 at 10 am as part of VIU’s Arts & Humanities Colloquium Series.

What makes Compton’s writing so engaging, said Watkins, “is his ability to create a unique mix that plays with various traditions—oral and written, sonic and visual, African and European, black and white, local and global, Canadian and American—in order to critique power, identity, and history. In Performance Bond, Compton reimagines and recovers Hogan’s Alley, using the methods of the DJ—mashing, mixing, sampling, spinning, signifying—to make the recent past more embodied and historically present.”

Dr. Watkins’ PhD dissertation, completed at the University of Guelph, addresses the politics and ethics of Canadian multicultural policy and citizenship—focusing on intersections between music and text—particularly as voiced by African-Canadian poets.

Watkins is an active scholar. He is a guest co-editor for a special issue of Critical Studies in Improvisation that focuses on improvisation and hip-hop. He is working on a paper on music and sound in David Lynch’s Twin Peaks. Watkins has also written book and film reviews and conducted interviews with many writers. He is Project Director of VIU’s “Writers on the Hill,” a series that brings diverse writers to campus. Watkins is also involved in a variety of projects that explore the boundaries between text and sound at the MeTA lab in Nanaimo, and the Innovation (Sound) Lab in Cowichan.

His Colloquium talk will look at how Compton incorporates hip-hop and turntable poetics in Performance Bond to recover the past and effectively blend such histories into the present.

The presentation will mix images, sound, and text, and Watkins noted that “By listening and experiencing how Wayde Compton reimagines and recovers Hogan’s Alley, we can begin to think of the kind of work we do in literary scholarship as a kind of sampling and/or engaged poetics.”

On November 25 Watkins will be joined on stage by bassist and student Darin Nicolle, who will provide some bass accompaniment during the presentation.

The Colloquium presentation is free and open to all–faculty, staff, students, and community members, and refreshments will be provided.