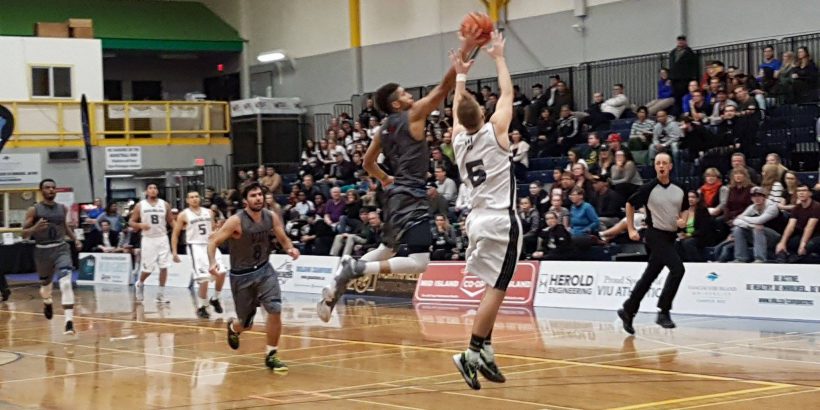 Above: Montell Lindgren jumps up for the steal. By Cole Schisler.

On November 4, the VIU Mariners hosted the Douglas Royals, and put on a clinic.

The first quarter began at slowly, and was low scoring. The Mariners moved the ball well, and pressed the Royals into making some mistakes. The Mariners were also sharp on the steals and created a series of turnovers, ending the half with a 18–15 lead over the Royals.

The Mariners came out strong in the second quarter and ran away with the lead, tallying up a score of 37–25 early in the second. Hayden Hall had a hot hand, landing four three-point shots to extend the Mariners’ lead. The Mariners went into the half with a lead of 50–35.

The Mariners took it back to school yard basketball in the fourth, raining points relentlessly on the Royals. Usama Zaid and Hayden Hall both landed a pair of three-pointers. The Mariners were passing effectively, and managed to keep the ball away from the Royals for most of the fourth. The match ended 91–74 in favour of the Mariners.

“We shot it well,” said Head Coach Matt Kuzminski. “We played with good spurts of energy defensively and offensively, if we could sustain that for longer that’d be even better for us.”

The Mariners had high scoring performances from many players. Usama Zaid put up 34 points, Hayden Hall had 26, and Jalen Schlegel had 10 points.

“We had good contributions from lots of guys,” Kuzminski said. “Usama Zaid was very aggressive, he made the right plays and the right passes. Across the board we had a lot of good contributions, Nic Maniatis gave us good minutes when we needed it, Hayden Hall had a good shooting night. Top to bottom everybody contributed.”

Riding high off their victory against the Royals, the Mariners faced off against the Capilano Blues on Saturday November 5.

The Mariners set the tone of the match early, and broke out to a high scoring lead in the first quarter. By the end of the first, the Mariners led the Blues 25–15. The Mariners kept up the pressure throughout the second quarter, and put up 20 points in the second, going into half-time with a lead of 45–31 over the Blues.

Mariners’ Guard Bryson Cox led the team in scoring going into the half with 16 points. The Mariners were 30/65 in shooting, and the Blues were 19/64. The Mariners missed only one free throw in the first half.

At the end of the match, the Mariners shot for a total of 46/111, and the Blues shot for 42/134. Bryson Cox had a big game for the Mariners, putting up 23 points. Usama Zaid was also a factor, finishing with 13 points, two rebounds, and a pair of steals.

The Mariners will travel to Abbotsford on November 18 to take on the Columbia Bible College Bearcats. Their next home game is Saturday December 3 against the Seattle Blue Angels.