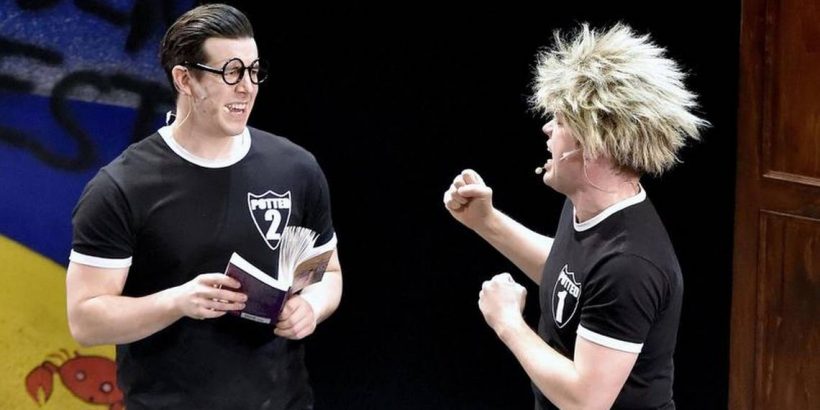 Above: Photo via kansascity.com

For those who may not follow every piece of writing I publish in this section, you may have missed the feature in the previous issue regarding the upcoming Potted Potter—a show that takes its audience through the seven books of J.K. Rowling’s Harry Potter series in a blistering 70 minutes. Potted Potter came to Nanaimo from across the pond–from the jolly old United Kingdom. The show was conceived by Daniel Clarkson and Jefferson Turner, both of whom wrote the piece and perform in most of its scheduled dates.

I say most, because the November 8 show at The Port Theatre featured alternate performers Joseph Maudley and James Percy. Both actors have a long history of stage performances, although I was a little disappointed not to see Clarkson, who was kind enough to do an interview with me on CHLY’s The Masthead. My disappointment, however, almost immediately faded when Maudley and Percy began the show. The pair of actors had a fantastic chemistry, and even seemed to relish in causing each other to break character through the entire thing.

While the primary part of the show is performing the sarcastic cliff-notes of the Harry Potter series, the play is also about Maudley and Percy and their relationship with each other and with the audience. There is a lot of the pair of them interacting in a sort of meta-narrative that casts Percy as the Potter expert and Maudley as the bumbling idiot who manages to fumble his way through, along with the way that these personalities interact with each other. Of course, it’s the kind of feigned ignorance of the source material that only comes from a deep knowledge of the material, similar to the way that they say in order to properly fake being “bad” at something, you should be pretty good at it first.

Potted Potter is an extremely high-energy show, and in spite of the short run time, they manage to throw a whole lot at you, including having the entire audience participate in a game of quidditch. The tone of the entire piece is quintessentially British, nearer to the Monty Python end of the spectrum than The Office. The humour is broad, smart, and occasionally quite topical. The performers suggested that Canada build a wall, and let us know that America would likely pay for it. There was a little something for everyone, and it served the incredibly (and surprisingly) broad audience. The crowd was young, old, and everywhere in between, and there wasn’t really a moment that wasn’t punctuated by laughter from someone.

Even the Harry Potter jokes weren’t especially deep cuts, and someone unfamiliar with the series would likely be able to jump right in and enjoy the show. Of course, there are plenty of jokes for the “true fans,” including a swipe at the American title of the first book being The Sorcerer’s Stone, instead of The Philosopher’s Stone.

It’s a tricky show to properly talk about, because nothing that I put into this review could capture how much fun it was to be there. From threatening a child with a water gun, to genuinely funny written jokes, to beautifully unscripted moments, Potted Potter  is truly one of those shows that deserves to be seen, rather than read about—a show written by Harry Potter fans, for Harry Potter fans. It’s also a show that’s not afraid to poke fun at the source material, including calling out the fact that Harry as a character is pretty dull if you’re being honest with yourself. Potted Potter is, first and foremost, a comedy show, and one that I feel deeply fortunate to have been able to experience.