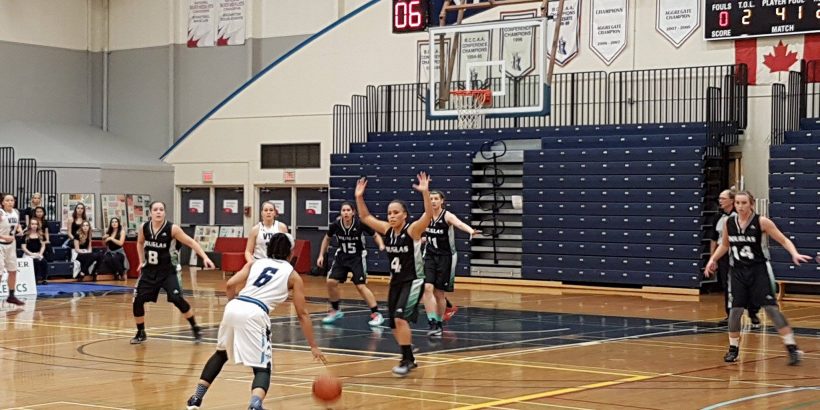 On Friday November 4, the VIU Mariners took on the Douglas Royals in a close contest.

Both teams came out strong defensively. The Royals relied on a few key players to make their shots, while the Mariners were varied in their shooting. The Mariners’ Emily Clarke came out with some impressive shots early on, and landed some big three pointers. The Royals led 18–15 at the end of the first quarter.

In the second half, the Royals managed to mostly shut down the Mariners offense. They ended the third quarter with only seven points, whereas the Royals scored 14 points. As in the first half, the Royals made the most of their rebounds and capitalize on turnovers.

In the fourth, the Mariners turned up the heat and sliced the Royals lead to 52–47 with four-minutes left to play in the match. The Royals held their composure and landed a series of shots to keep the Mariners down, ending the match 59–52 over the Mariners.

“The effort was really good,” Coach Franjo Crankovic said. “The girls didn’t give up. They made some mistakes, but they learned from them. The team played well today.”

Overall, the Mariners took 81 shots, compared to 120 shots for the Royals. While the Mariners were more accurate than the Royals in almost every category, the Mariners failed to capitalize on rebounds, which ultimately led to their loss.

“Every day we focus on getting better than yesterday and that’s all I expect from the women,” Crankovic said.

On Saturday November 5, the Capilano Blues came to town to test the Mariners after their defeat against Douglas.

The Blues opened the scoring early and benefited from high accuracy, hitting over 50 percent of their shots in the first quarter. At the end of the first, the Blues led 27–10 over the Mariners.

In the third quarter, the Blues were dominant. They ended the quarter with a lead of 60–26, the widest lead of the match. The Mariners fought back in the fourth quarter, they controlled the pace, were aggressive on their rebounds and put up 14 points in the quarter, but were unable to overcome the wide lead of the Blues. The Blues won 69–40.

The Mariners finished the match shooting 27/95 total, and the Blues shot 41/111 total. The Mariners improved on their ability to recover rebounds, with 44 total rebounds to Capilano’s 49 rebounds. It was the Mariner’s accuracy that told the tale of this match.

The Mariners will travel to take on the Columbia Bible College Bearcats on November 18, and their next home game is January 6 against the Quest Kermodes.