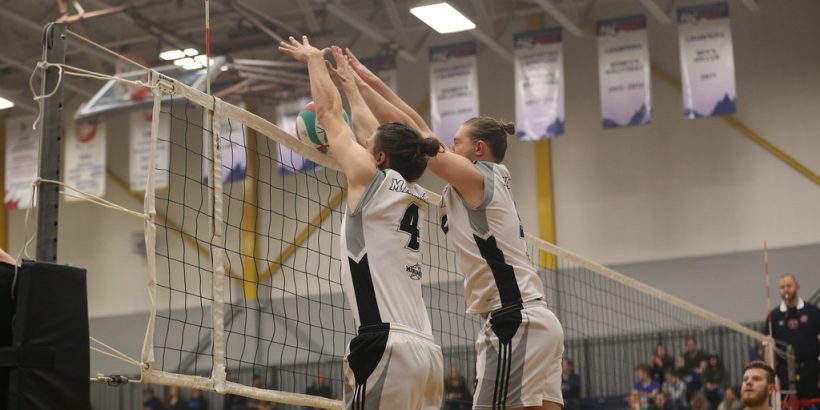 Above: Grigg and Wayne Woyciehouski jump up for a block. Photo courtesy Northfield Photography.

Fresh off their first loss of the season against Capilano, the top ranked Mariners were poised coming into their weekend matchups against the Douglas Royals.

“We’ve had a really good week of practice,” Mariners Head Coach Ave Avender said. “Tasting a loss last weekend was a good thing for us. We’re a pretty mature group, I think they enjoy the success, but realistically, having a good weekend at provincials means everything.”

The Mariners beat the Royals 3-1 on Friday. The Mariners won the first set 25-17, while Douglas took the second 26-24. The Mariners came back to take both the third and fourth sets 25-17. Mariners’ Middle Wayne Woyciehouski had a huge game, with a good number of blocks and kills, that led his team to victory.

“Last weekend we hit a bit of a rough spot,” Woyciehouski said. “This weekend the goal was to get over that adversity, be confident, have fun, and play as hard as we could.”

In Saturdays match, the Mariners continued their success against the Royals, and won their match in three straight sets. The Mariners won the first set 25-17, the second 25-18, and the third 25-13. Freshman Jeff Webb, and Sophomore Braydon Brouwer were a force to be reckoned with on the left side of the court, tallying up a high number of kills between them.

Going into new semester, the Mariners have a record of 11-1 ,putting them comfortably atop the PACWEST division, and are showing no signs of slowing down. The Mariners are putting their winning record far from their mind, and are focusing on each team one game at a time.

“The depth in our league has been strong for quite awhile,” Coach Avender said. “We have to show up every weekend, there’s always good teams, we prepare for every weekend like it’s a do or die match. With the talent we have, and the success we’ve had so far, we hope to go into provincials as the top seed and see where it goes from there.”