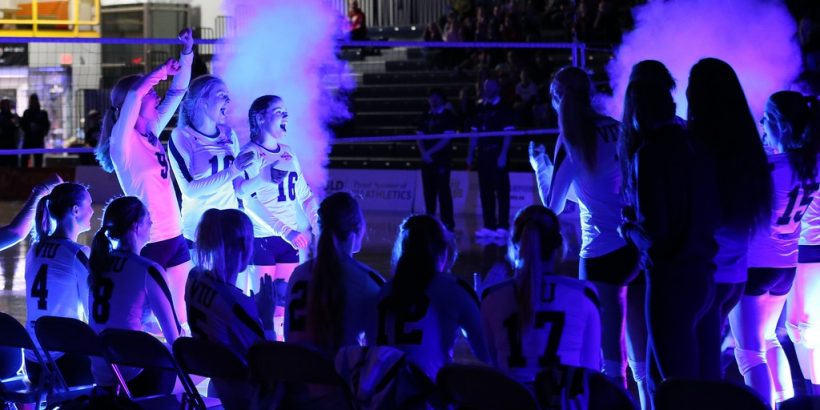 The Mariners getting pumped up before the match. Photo courtesy Northfield Photography.

The Mariners getting pumped up before the match. Photo courtesy Northfield Photography.

The Mariners were riding high going into the PACWEST Women’s Match of the Week on Friday against the second-place Douglas Royals to set off a weekend doubleheader.

“I don’t think we played our best match today,” Mariners Head Coach Shane Hyde said. “We came up against a really good opponent, and I don’t think we were 100 percent ready to match their intensity.”

The Royals took the first set 25-13, the Mariners won the second set 25-17, but fell to the Royals in the final sets 25-23 in the third, and 25-22 in the fourth. The Royals generated momentum early on and sustained it throughout the match. Despite strong performances by Mariners’ Libero Kelsey Hutt, and PACWEST Athlete of the Week Megan Rosenlund, the Mariners failed to find their stride against the composed Royals.

The Mariners defeated the Royals in three straight sets on Saturday. The Mariners took the first set 25-21, the second 25-22, and the third 25-23. It was a close match, but the Mariners were able to outscore the Royals. The Mariners also performed better on defense and kept the match in their favour.

“Today we focused on what we had to do in order to win, and I think we really executed that well as a team today,” said Mariner’s Power Hitter Megan Rosenlund.

Over the winter break, the Mariners will head down to San Diego for a volleyball tournament. Rosenlund believes the tournament will give the Mariners an opportunity to reshape themselves and find new goals for the next semester of play.

“I’m excited to see what happens next semester,” she said. “We’re going to keep focusing on one game at a time.”