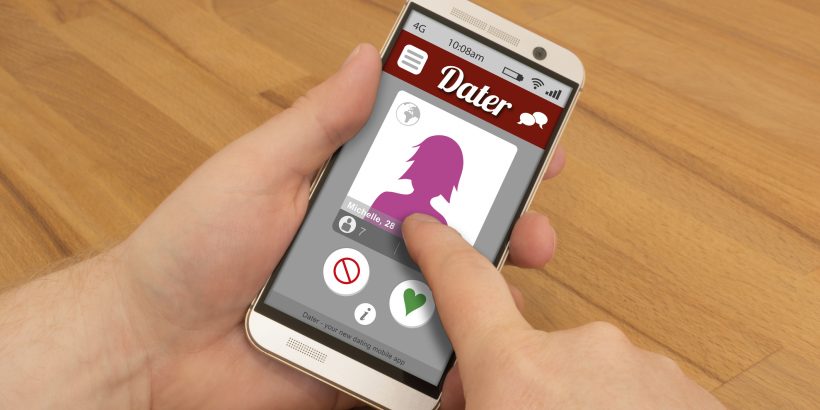 Holding a smartphone in one hand, swiping or using gesture control with the other hand. On the screen is a mock up of a dating app with a female profile.

It’s 11:30 am and we’re still in bed. We’re both exhausted. The room smells like sweat and cigarettes. I pull Rose close and nearly drift back to sleep. The scene is innocent enough; you’d probably have no idea that she fucks married men for money.

I then realize we completely forgot to do the interview, the sole reason we saw each other the night before.

I met Rose late last September, a couple days after my twentieth birthday. I had just completely ruined a nearly year-long relationship, so I was doing what any young and hurt person does.  I got on Tinder and swiped right when I saw her picture. I think we sent less than 20 messages each. I was there later that night. She told me to just open the door when I showed up.

She was naked—I didn’t even get a chance to give an awkward “hi”.  As we continued, I noticed her entire room was pretty much some kind of strange sex-dungeon.  There was a sex-swing on her wall, and all sorts of lubes and candles covering the surfaces. The vibrators on her bedside table made me feel as if I were a green pepper among a field of cucumbers. I was intimidated, and whenever I am in a potentially uncomfortable situation, I become a stand-up comic.

I saw her butt-plug beside her bed and audibly gasped. “Oh my god, look at that thing.”

“Oh, that? That’s nothing. Check this out.” She reached into her bedside table, and pulled out something that looked like a strawberry the size of my fist. I was in awe.

“Jesus fuck. Look at that thing! It’s bigger than you are!”

“What? I mean, anything’s possible with a good start.”

“What does that even mean? I…Why would you even invite me over? I can’t compete with that!”

From there, we became good friends. She’s a funny girl, good-looking, works out every day. She’s also an accountant in the mid-Island area—a really nice girl who just so happens to have the sexual appetite of Genghis Khan. It was a couple weeks later when I learned she was a sugar baby.

Present day, we meet up in a coffee shop near her house. The shop is nearly empty, which is probably good considering the content of the conversation. We order some coffee and food, and find a nice seat by a window in a corner. We talk over mouthfuls of turkey sandwiches. She’s in sweatpants and a hoodie. Her hair’s a mess. Her glasses are on the verge of falling off, and she looks hungover. She’s absolutely beautiful. She looks like she’s about to break your heart more than anything else. That’s probably the strangest part about her, at least to me.

“Alright, so, quickly in your words, what is a sugar baby?”

“A sugar baby is someone who will be in a romantic, non-committed relationship in exchange for money and gifts. It can be a sexual or emotional relationship. Generally no strings attached.”

Rose speaks a little too enthusiastically, and I tell her to quiet down or else we might get a strict talking-to.

“And what’s a sugar daddy?”

“A grown man, usually married, who wants to spend money and time on a younger [woman]. Sometimes the circumstance isn’t even sexual. I think it’s sort of a power thing.”

“Right, and when did you start?”

She looks off in the distance, scrunches her face, and looks back at me quizzically. “About a year ago, right when I got sober.”

“What made you want to do it?”

“Money. It was something I had always joked about doing. One day I downloaded an app and got connected with a sugar daddy. He came over to my house and I was absolutely terrified.” She crosses her arms and leans back, “We’re supposed to meet in public first, but he didn’t want to get recognized. I made 300 bucks. I knew it was for me before he even left. The money was easy.”

“No, no.” She laughs lightly, I worry I offended her. “Normal, I guess. My parents got divorced when I was 14, turns out my mother is a whore. I moved in with my boyfriend at the time. We started doing a fuck-ton of drugs.”

Rose has an extremely self-deprecating sense of black humour that I find both hilarious and horribly uncomfortable. One might expect some sort of teenage mistress to be seductive and flirty. Perhaps she is to her clients, but to me, she talks bawdily and straightforward.

“All the fucking drugs? Everything we could?” First it was pot, then E. Lots of cocaine after that. We’d get super high and have a ton of sex. I’m an addict in nearly every way. Drugs, booze, sex, everything. My boyfriend and I broke up after that, and I started dating a girl. I was selling drugs too. I never slept!” She giggles at her own story. The server in the coffee shop hears us and looks at Rose the way Jim in The Office looks at the camera. She laughs so hard she snorts.

“Then you got clean.”

“About a year ago, yeah. I got on anti-depressants and started doing a bit better. Quit the drugs and everything, which sucks.” She looks sad for a moment, then smiles. “I miss coke, Ahron.”

I pause for a moment and watch her eat. The coffee is terrible and the room is luke-warm. The sandwiches are so mediocre, you eat them only because wasting seven dollars is a tragedy.

“So how do you feel about this whole sugar baby situation? Is this something you regret doing?”

“Ahron, I used to sell drugs while fucking everything!” She laughs short and loudly. “No, not at all. I love it. I have great sex and I make a ton of money off it. The guys I fuck are generally good looking, which I didn’t expect when I first started this. I think most of these guys are just in sexless marriages, so they came looking for me.” She shrugs, pauses for a few seconds, looking for something to say.

“They’re friendly. They respect me. I haven’t had any issues in the year I’ve been doing this, so far.” She pauses again for a moment and scrunches her brow. “Actually, one of them peed on me, which I wasn’t into, but worse things have happened. The only thing I regret is when they have wives, so I just don’t ask.”

I shuffle around uncomfortably at the pee comment, and hope no one heard. I can tell the server from before is listening to us from the bar, but he seems more intrigued than offended.

“How much are you making from this?” She waves her hand as if to say “no, move on,” but I press a little bit. Finally, she says, “currently about three grand per month.”

“How does that work?”

“Payment is one of two ways. Monthly or per visit. Three of them are per visit right now. Usually make four to five hundred off the visits. One of the sugar daddies is monthly. He gives me about two grand per month.”

“I don’t have two grand to blow on anything, let alone a secret teenage hooker,” I mumble with a smirk.

She guffaws and rolls here eyes. “Not a hooker, Ahron!”

“Why not? How is this different?”

“Well, for starters, I make way fucking more. Plus sex doesn’t necessarily have to be part of the situation. I also have total control over who I have come over.”

“How is it different than GFE (girlfriend experience) then?”

“I don’t really need to pretend to be anything but a teenage mistress. There’s no more pretending that we’re friends who get along and have sex. Not a ton of affection, really. It’s not what any of them want.”

“Probably worth noting that you’re bi.”

“I am gay as fuck, yes. I love vagina. Tits. Everything.”

“Would you be open to a sugar mommy?”

“What about relationships? Or your family? Do any of them know?”

“Relationships are a big no. Feelings get in the way of money, and I only seem to fuck up. Guys are possessive; most of them would not be okay with this situation. I don’t really want anyone getting in my way to begin with. Family is a fat no. They do not need to know about this.”

“What about your regular sex life?”

“I love sex! I’m actually not supposed to see guys other than my sugar daddies, but whatever. Being a sub makes me open to just about everything, so I try to experience as much as I can.”

“How many men have you slept with?”

“Would you recommend being a sugar baby to anyone?”

“I have recommended it before. It’s honestly the easiest thing. You just have to be not dumb as fuck. A pretty girl with a good head on her shoulders can make thousands. Most of the other girls I’ve met doing this make upwards of $100K a year.”

“So you have a bunch of cash lying around somewhere?”

“And with your other job, you don’t exactly have a ton of expenses to deal with.”

“Calvin Klein is the only man I blow my money on.”

“Honestly, man, I have no clue. It’s like, make money now, and then stop when I don’t want to or need to anymore. I don’t really have a plan.”

“With all the drugs and sex and weird shit you’ve done, do you ever figure what you need is less dudes and more therapy?”

She laughs again and smirks at me, rests her arms on the table and puts her head in her hands. “You’re a dick. Besides, how much money do you have again?”

We finished the interview and I dropped her off around 1:30 pm. Apparently, she and some couple planned on being friendly with each other that day, and I had a final to study for. As I drive away, I think about how screwed up life is. Here was this random girl who had basically fucked and snorted her way to a higher class, and I was living in my car, going to university, doing everything the “right” way. With that in mind, I can’t really judge. I’d probably do the same if I could.

*Names have been changed