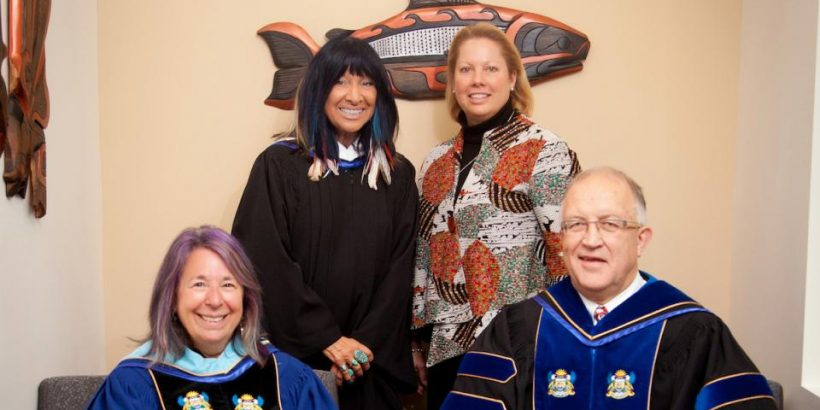 The initiative, launched in 2002 by the Canada School of Public Service, aims to strengthen links between the federal government and Canadian universities. The role of Deputy Minister University Champions includes fostering relations and identifying shared priorities between the federal government and universities; aligning university research and curricula with public service priorities; and building awareness of career opportunities in the federal public service.

“I am honoured to be named the Deputy Minister Champion for Vancouver Island University,” said Lafleur. “I look forward to working together to identify opportunities to build stronger linkages between the public service and the University, through initiatives such as the Government of Canada’s Public Servant-in-Residence Program.”

Lafleur recently visited VIU for the first time. She toured the Nanaimo campus, met with Dr. Ralph Nilson, the University President and Vice-Chancellor, and attended the awarding of an Honorary Doctorate of Laws for legendary singer/songwriter Buffy Sainte-Marie.

“As Associate Deputy Minister of Indigenous and Northern Affairs Canada, I would like to acknowledge the commitment the university has shown towards reconciliation,” said Lafleur. “Your collaboration with Indigenous communities whas led to recruitment of Indigenous staff and faculty, and the creation of scholarships, academic programs and services that provide vital support to Indigenous students in their pursuit of post-secondary education.”

Lafleur brings ample experience to her VIU posting. She began her public service career with Finance Canada in 1997 after completing her Master of Arts in Economics and Canadian Studies from the Johns Hopkins School of Advanced International Studies in Washington, DC. She held numerous positions at Finance Canada, including Assistant Deputy Minister of Federal-Provincial Relations and Social Policy. Lafleur was appointed as INAC’s Associate Deputy Minister in May 2016.

“We’re honoured that Ms. Lafleur is VIU’s Deputy Minister University Champion,” said Nilson. “Our involvement with this unique program will ensure that VIU’s faculty, staff, and students are aware of federal initiatives, career opportunities, and more. It will also be invaluable for us to have a champion in Ottawa with whom we can be in regular contact, and vice versa.”