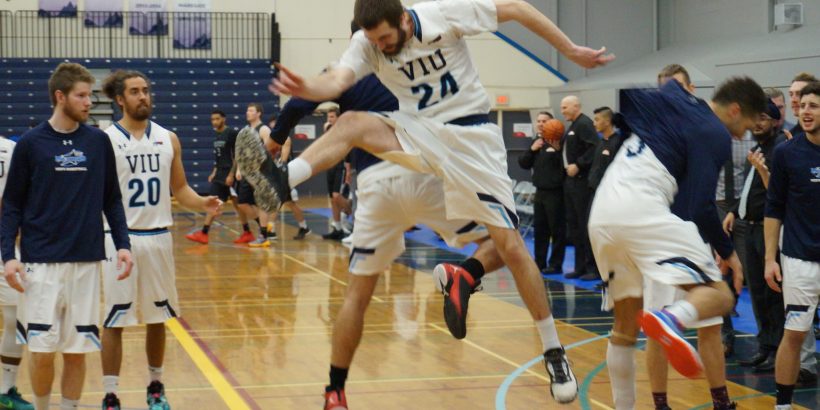 Above: Mariners Forward Jalen Schlegel leaves his feet in celebration in the pregame warmup. 📷 Cole Schisler

On Friday, January 6, the VIU Mariners hosted the Quest Kermodes for the PACWEST Basketball game of the week. The Mariners came back to win the match in a stunning 85-71 finish over the Kermodes.

“A lot our guys have been sick this week, so we haven’t had a full practice roster,” Mariners Head Coach Matt Kuzminski said. “This wasn’t a game where we had the energy that we needed, or the execution, but I give our guys a lot of credit for staying with it, and we were able to make a lot of big shots to get us the win.”

Mariners Guard Bryson Cox had a high scoring game with 24 points, Montell Lindgren tallied 17 points and 3 rebounds, Jason Schlegel had 16 points after nailing both of his three point attempts, and Kaz Kobayashi put up 10 points with four rebounds in the game.

“I thought the first half was slow, we picked up our pressure on defense in the second half, we’re going to have to build off that for tomorrow’s match,” Coach Kuzminski said. “I think tomorrow’s game will be much tougher. We’ll be going up against a fast-paced team, and we’ll have to be ready for the challenge.”

Despite the challenge, the Mariners were ready, and beat the Langara Falcons 86-66 on Saturday.

“We just have to keep building,” Coach Kuzminski said. “We have not had our full roster for a single game yet, we’re always missing somebody. We’re trying to get healthy and get all our guys together to build some chemistry and get some momentum going into the future.”

Next week, the Mariners will travel to Vancouver to take on the Douglas Royals on January 13, and the Capilano Blues on January 14. The next Mariners home game will take place on January 27 against the Columbia Bible College Bearcats.