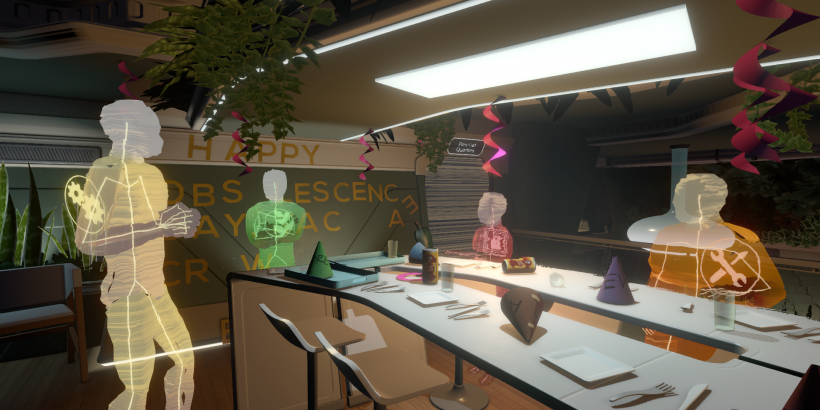 You are a woman, exploring a foreign, contained setting, putting the pieces together to find out why the people who should be there aren’t. For those who’ve played Fullbright’s Gone Home, this will sound familiar. But this is not Gone Home, it’s Fullbright’s space-based sophomore effort, Tacoma.

By entering this facility, you consent to the following: AR audio recording is in use at all times and may be archived by Virgin-Tesla or its subsidiaries.

Tacoma is set in the year 2088 on the titular Lunar Transfer Station, and is a stark shift from the mid-90s, suburbia setting of Gone Home. Steve Gaynor, co-founder of Fullbright, says the decision to steer the studio’s second game into a fictional, futuristic era was born out of a division within the team.

Fullbright’s Gone Home sold 50,000 copies within its first month of release in August 2013, and by February 2014 the total had jumped to 250,000. The game won Polygon‘s 2013 Game of the Year, BAFTA’s 2013 Best Debut Game, as well as critical acclaim from a long list of gaming publications. Using Gone Home as a drawing map for Tacoma, even loosely, seems like a logical choice for continued success.

“It’s all bound up in that question…[how to] get to somewhere that doesn’t just feel like Gone Home plus X or Gone Home but Y,” Gaynor says, “[but] an experience that answers to itself in a way that stands on its own.”

The similar systems between the two games, Gaynor explains, is partly a product of Fullbright’s small-studio budget. Developing AI is expensive, hence the focus on a lone protagonist. Gaynor also adds that the exploratory, detective-like gameplay in Gone Home is conducive to the kind of story they want to tell in Tacoma.

“We wanted to do something that none of us had really done before, and to push us into a setting and a bunch of constraints and questions that were unique to a fictional time period—to a time period in the future—an extrapolation of our own reality…like, if trends keep going in this way, or if this thing happens that isn’t expected, this is what the present day might lead to,” Gaynor says.

Originally slated for a mid-to-late 2016 release, Tacoma has been pushed back to spring 2017. Gaynor notes the major challenge with Tacoma has been creating the opportunity for meaningful, unique interactions between the player, the space station, and its technology.

“I’m really glad we got the word out there [early], and that people could start being aware of the game and all that kind of stuff, but it also made us realize, ‘Okay, the ideas are only half there—we need to be thinking differently about this.’”

In the gameplay videos Fullbright has released so far, the similarities with Gone Home are clear: You are alone, in an eerie, foreign environment and have to examine objects to further your understanding of what has gone on without you. Playing as Amy Ferrier, you are sent to Tacoma to replace the previous Operations Specialist, Clive, only to find out your entire crew is missing. You are presented with the terms of use of the augmented reality (AR) embedded within the space station before you can enter:

Interactions between crew members, created from the aural and spatial data of the crew, can be played back and watched. The crew members take the form of 3D avatars, and although the avatars are only recordings of the crew members, they are moving characters nonetheless, and it raises some intriguing gameplay questions. What will the experience of trying to locate missing crew members be like when they are seemingly standing right in front of you? In what ways does getting to know a recording of a person feel authentic to getting to know an actual person? And in what ways does it feel alien?

In real-life 2088, when historians look back and compare their present day with Tacoma as we do with all science fiction, the most interesting question won’t be whether or not the game correctly predicted a new technology, but whether it portrayed a realistic experience—authentic interactions and consequences between new technology and human beings. Think 1984. Think Back to the Future. Media has a startling ability to get some of these things right.

Gaynor says he is happy with how Tacoma has grown.

“You can hope that you win the lottery, like, ‘Oh, we had all the perfect ideas right away,’ Gaynor says, “but, on some level, the fact that it took us a while—in exploration and iteration—to really find the identity of what we were making [with Tacoma], I think—I hope—speaks to the fact that we actually are pushing it to be something that is unique.”

Spenser is the managing editor of Portal, the web editor of The Navigator, and a contributor to Clip Through. His work has been featured in (parenthetical), The Quilliad, text, Potluck Mag, and elsewhere. He was awarded the 2016 Pat Bevan poetry scholarship.