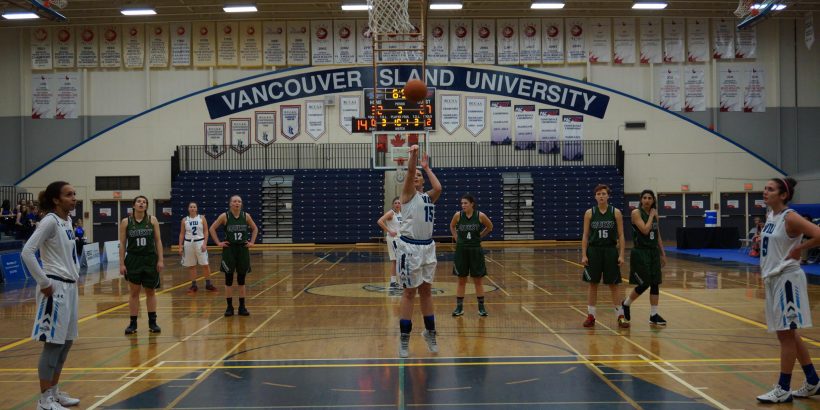 In their first league game since winning two of their three winter tournament matches, the Mariners showed poise in their 70-48 victory over the visiting Quest Kermodes.

“We played strong, we played together, we had good ball movement, and we executed well in many ways,” said Mariners’ forward Sienna Pollard, who scored 21 points in Friday’s match.

The Mariners out-scored the Kermodes in every quarter, and were dominant from the get go. Mariners guards Avery Snider and Emily Clarke each had a total of 9 points between them at the end of the first half. Snider finished the game with 16 points, and Clarke finished with 12. Along with her 21 points, Pollard was aggressive on rebounds, and racked up 17 rebounds in the match.

“We kept working hard and made sure we had a play-by-play mentality. We kept focused and kept moving forward,” Pollard said. “I think when we stay positive with each other and encourage each other, we take the lead and go to the next level.”

On Saturday, the Mariners took on the Langara Falcons, and finished with a decisive score of 74-38.

Going into the match, Mariners head coach Bill McWhinnie said of Langara, “They’re a smaller team that likes to press. We’re going to have to handle pressure, take care of the ball, and get good shots in.”

The Mariners got ahead early with a lead of 17-9 after the first 10 minutes of play against the Falcons. At the half, the Mariners widened their lead to 34-18 over the Falcons.  Snider had 13 points for the Mariners, Pollard had 8 points and four rebounds. The Mariners continued to control the match throughout the third quarter, which they took 54-27.

“I thought we were really good defensively,” Coach McWhinnie said. “We gave up far too many points last week at our tournament, so this week we were focused on getting back to a defensive mindset. We made it difficult for them to get good shots, other than that, we got easy opportunities at the other end.”

Next week, the Mariners will travel to Vancouver to take on the Douglas Royals on January 13, and the Capilano Blues on January 14. The next Mariners home game will take place on January 27 against the Columbia Bible College Bearcats.