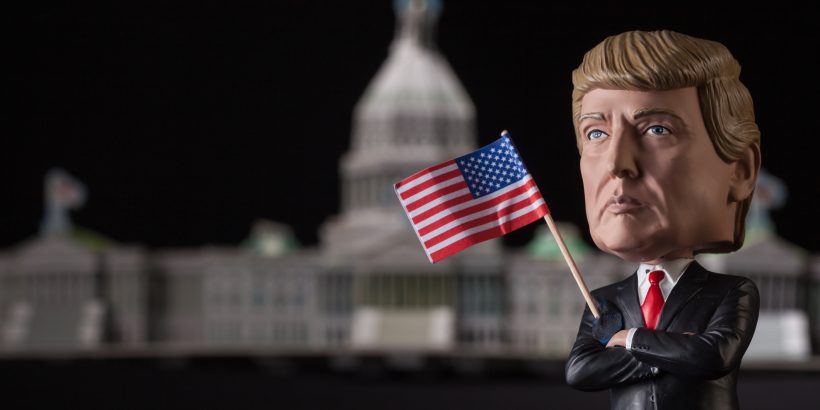 Lexington, KY, USA – November 8, 2016: Republican Donald Trump, as depicted by this lifelike bobblehead doll, won the 2016 American presidential election against Democratic candidate Hillary Clinton. This realistic figure became popular prior to the 2016 presidential election and is one of several dolls marketed by Royal Bobbles.

By now I hope you have participated in or are least aware of the events on January 20 and 21. You may have also seen the hashtags “#InaugurateTheResistance,” “#J20Resist,” or “#DisruptJ20” floating around the news and social media. In case you are unaware, these hashtags refer to the various actions across the USA and Canada to disrupt the inauguration of Donald Trump into the oval office of the White House. Planning the action for J20 started as soon as the US federal election results came in last November, and it has brought together several groups and movements.

Along with several protests throughout the US, many activists travelled from afar to Washington D.C. where the inauguration ceremony and the main action was happening. Several non-profits, grassroots organizations, and political parties of various stances have simultaneously organized actions within the city against the Trump presidency. The schedule of the events that started on January 14 is listed on < disruptj20.org>.

ANSWER (Act Now to Stop War and End Racism) Coalition, an anti-imperialist and anti-racist organization founded in 2001, organized a gathering at the Navy Memorial on Pennsylvania Avenue. Bernie Sanders was praised by the organization for starting a campaign that offered “a new direction and opportunity to take on entrenched power and extreme inequality” yet it was lamented how “[t]hat campaign was largely suppressed”.

The march on the White House was led by the Workers World Party, an intersectional Marxist-Leninist organization. The event was advertised on their website and Facebook as a “stand against capitalism” and a “fight for socialism,” claiming that “the Democrats want [to] divert rage against Trump into a stronger, pro-war stance against Russia”. The Workers World Party has a radical agenda, hoping that the “Anti-Trump struggle [will] blossom into a struggle against the entire system of capitalism, [and] white-supremacy”.

Other groups that were present included the Movement for Black Lives Matter, various labour unions, environmentalists, and feminists.

The Women’s March on Washington the day after the inauguration was a fight back against Trump’s sexist comments during his campaign, as well as his appointment of Mike Pence as vice president, which may be detrimental for the rights of women in the US. As a member of Congress, Pence has an atrocious record when it comes to opposing Planned Parenthood and access to safe abortions; CNN has even quoted him opposing the use of condoms by claiming that they are “too modern”. Pence has strong conservative views, discourages women from joining the military and participating in the workforce, and has signed a “religious freedom” law that legalizes the discrimination of sexual minorities.

In support of this, 370 “Sister Marches” took place on January 21 across the country in cities such as Chicago, Seattle, Boston, San Francisco, Miami, Dallas, Las Vegas, and in cities outside the United States such as Vancouver, Toronto, London, Tokyo, Seoul, Vienna, Brussels, Granada, Beirut, and Nairobi City, to name a few.

There was even a Sister March in Nanaimo from the Diana Krall Plaza to Maffeo Sutton Park, attended by almost a thousand protestors. In Victoria a rally held in Centennial Square to support the Washington Women’s March was immediately followed by a “Solidarity Trumps Hate” march.

Disrupting J20 was about more than just preventing a “nasty” man from becoming president of the United States; it was also about resisting the “nasty” movement behind him. Those who have shown open support for Donald Trump include neo-Nazis, the KKK, and a reactionary movement known as the alt-right. This online ultra-conservative movement is primarily made up of young white males who are anti-feminist, anti-safe space, and anti-political correctness. The alt-right has shown to be against multiculturalism and holds white-supremacist views, believing that “freedom of speech” means being able making racist and anti-Semitic comments.

DisruptJ20 and the resistance of Donald Trump are many things to many people. For feminists it is challenging male chauvinism, misogyny, and patriarchy. For ethnic and religious minorities in the US, it is a struggle against systematic discrimination and white-supremacy. For Bernie supporters and progressives it was a fight against a corporate oligarchy that protects the interests of the wealthy while ignoring the needs of the poor and middle class. Anarchists and communists of the far left see it as an opportunity for radicalized liberals in a class struggle against an imperialist government that they believe allows men like Trump to be president. Whether it was a protest against racism, sexism, or capitalism, the threat of Trump’s presidency is an incentive for many different movements and peoples to converge and stand in solidarity with each other, to perhaps make America great for once. 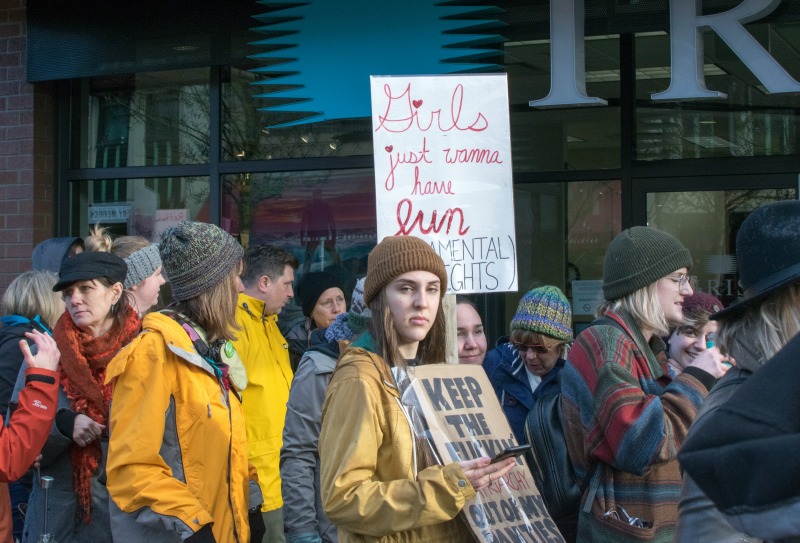