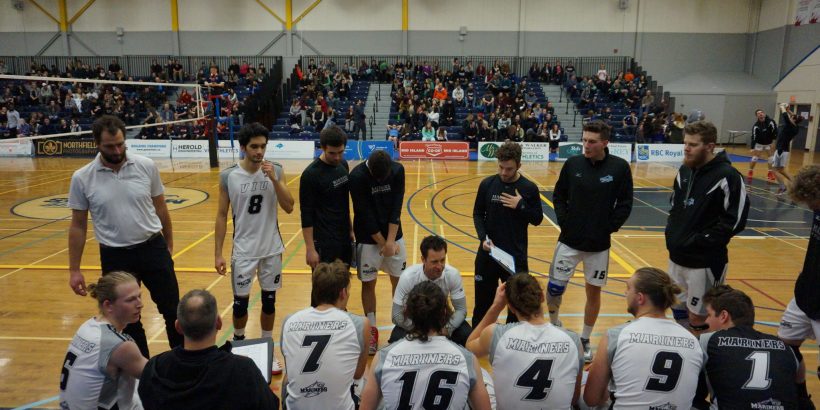 Above: The Mariners gather around Coach Avender. 📷 Cole Schisler

The Mariners added to their near perfect season by defeating the Columbia Bible College Bearcats in back-to-back matches over the weekend.

The Mariners have suffered only one loss this season to the Capilano Blues back in November, where they lost a hard-fought match 3-2. Over winter break, the Mariners travelled to Los Angeles for skills training camp. Since then, they have developed their depth, built chemistry, and are harnessing their confidence into success on the court.

“It’s always nice when you do a trip like that, the guys get a chance to gel a little more,” Head Coach Abe Avender said. “Their discipline has been really good all year long, so it was nice to get all the boys together before second semester.”

Coach Avender is proud of how the Mariners devoted their efforts to training while at the camp. He said that the players have a strong desire to train as hard as they can and to turn their work into concrete results. Coach Avender is hoping to carry that dedication into provincials.

“We’re focused on staying consistent,” he said. “One thing we talked about for the first half of the season is getting better, but now it’s more about specializing what’s already in place. This is the fun time too. All the teams start getting better and they’re hungrier to win.”

On Friday, the Mariners displayed that hunger to win by beating the CBC Bearcats in three straight sets. The Mariners came out with high energy and had the match well in hand from the first serve to the last. The Mariners took the first set 25-18, the second 25-12, and the third 25-16.

The Mariners stayed consistent, and defeated the Bearcats in Saturday’s match as well, winning again in three straight sets. The Mariners won the first set 25-17, the second 25-18, and the third 25-21.

“We hoped to create enough pressure that the other team would make errors,” Coach Avender said. “We tried to limit the errors on our side to improve our chance to turn balls over. Regardless of the quality of the team, if you can put pressure on them, you can control the match.”