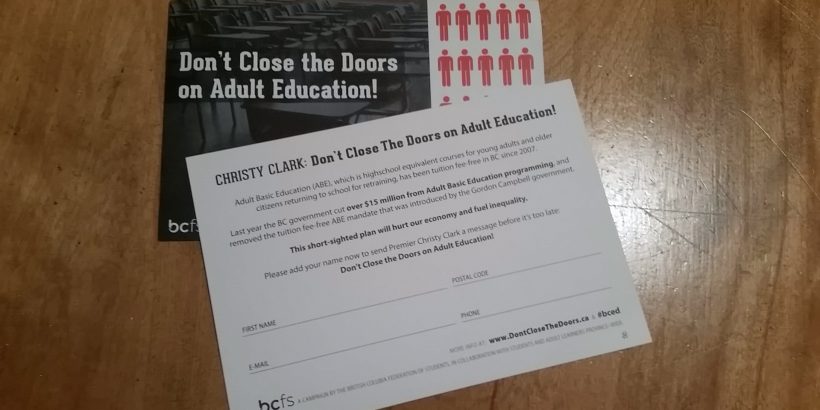 Above: “Just one of many strategies to show support for reinstating ABE funding is signing the Don’t Close the Door campaign postcard. These can be found at the VIUSU in Bldg. 193.” 📷 Catherine Charlebois

Representatives from the Vancouver Island University Students’ Union (VIUSU) are preparing to petition the British Columbia government to bring back funding for the Adult Basic Education (ABE) program, which enables adults to finish or upgrade their secondary education.

Avery Bonner, the VIUSU’s Director of External Relations, and Sarah Segal, a VIUSU advocacy organizer, are going to Greater Nanaimo and Cowichan area city councils this month to present their case for the British Columbia Federation of Students’ (BCFS) “Don’t Close the Doors on Basic Education” campaign.

“[The campaign] is pointed at all universities we have members in, and it’s a big provincial issue,” says Bonner. “[BC universities are] splitting up the work, but we’re making sure that all of our bases are covered.”

Having already gone to Ladysmith to present their case, the two are headed to the Nanaimo City council and Powell River this month. They are not the only ones within the BCFS to do so. As Michael Olson, BCFS’s Executive Officer explains, this campaign is province-wide, and doubling its efforts to reach out to the community.

“It’s part of a provincial strategy to reach out to municipal governments and local chambers of commerce, to gain support from those bodies,” he says.

ABE funding has experienced several slashes, once in 2002, and a $6.9 million cut in 2014, despite recommendations from the BC Finance Committee.

This year, renewed pressure in the campaign has the VIUSU testifying in an annual governmental Finance Committee budget consultation tour. A postcard campaign, hosted by the VIUSU and other student unions across the province, seeks to quantify public support for the campaign by collecting and sending postcard pledges across the province to the Minister of Advanced Education.

The campaigns have proven successful–this year, the Nanaimo Chamber of Commerce pledged its support and endorsed the campaign.

With presentations, and an upcoming social media campaign capturing video statements from ABE students, VIUSU has hopes that their efforts will help sway the government’s budgeting this year.

“It’s not just a VIU problem,” says Bonner. “It’s a British Columbian problem, something that we all have to work together with, not just now, but also in the future.”