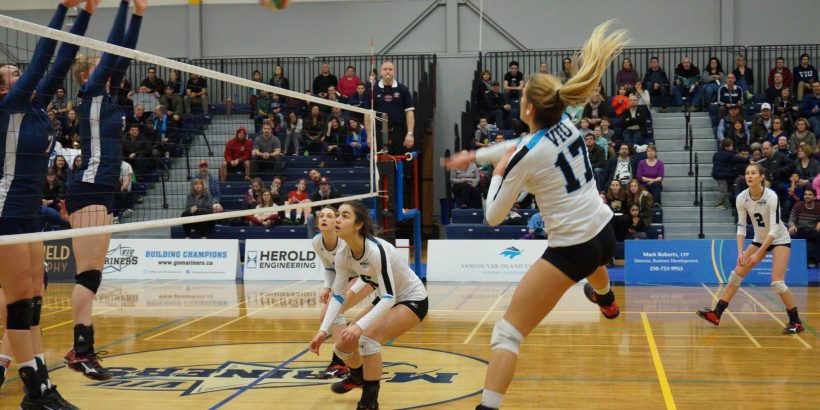 Since returning from a tournament in San Diego California over the winter break, the Mariners have been a force to be reckoned with on the court.

“We’re definitely more balanced,” Head Coach Shane Hyde said. “We have offense coming from all positions, whereas before San Diego, we were only putting the ball to our outside hitters. Now, we’re spreading the ball around a lot more.”

Coach Hyde was impressed by the work ethic of the girls down in San Diego. He thought that players who usually see less play time took the opportunity to shine at the tournament, and proved that they were ready to play when they get the call, and in future seasons.

Following the tournament, the Mariners have only lost one match, where they fell 3-2 to the College of the Rockies Avalanche. The Mariners beat the Avalanche in the following match 3-1.

This weekend, the Mariners took on the visiting Columbia Bible College Bearcats. Despite struggles early in the match, the Mariners managed to beat the Bearcats in three straight sets. They took the first set 25-18, the second set 25-22, and the third set 25-22.

“CBC gave us a bit of a push and we started to panic a bit,” Coach Hyde said. “I thought Megan Rosenlund played well offensively, and Mikayla Wagner  was almost automatic with her offense. Our defense was sporadic, it was really good at times, but left some holes in other places.”

The Mariners repeated their success over CBC in Saturday’s matchup. They easily dispatched the Bearcats, taking the match in three straight sets. They won the first 25-12, the second 25-15, and the third 25-14.

Heading into the last stretch of regular season, Coach Hyde hopes to guide the Mariners to another CCAA National Championship title. He says that the Mariners need to improve their movement of the ball, and they need to eliminate any elements of panic in their playstyle.

In the 40-year history of the CCAA, a handful of teams have won back-to-back titles at nationals, however no team from the PACWEST conference has ever repeated as national champions.

“The PACWEST conference is the strongest conference in the country,” Coach Hyde said. “We have to win provincials before we can make it into nationals, so we can win nationals just as much as we could lose nationals. We’ve got pretty much the same team that won it last year, there’s no doubt in my mind that we could win nationals this year.”