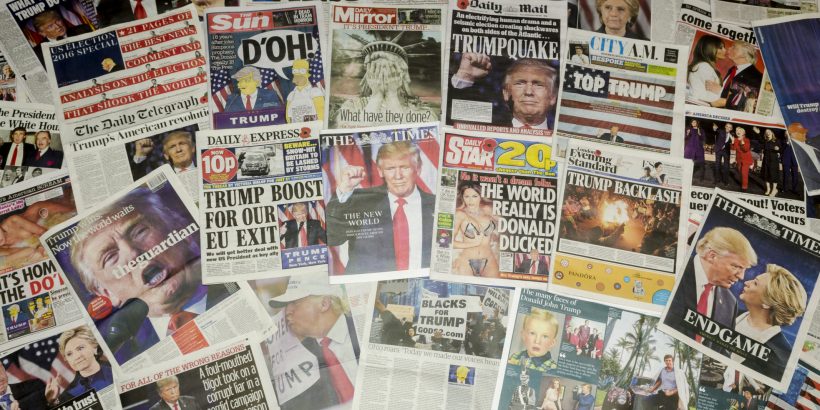 London, England – November 10, 2016: British newspaper front pages reporting on the US presidential election result in which Donald Trump became the 45th president of the United States.

Things have seemed a little unsettled, crazy, wacky, absurd, scary, but, above all, the activities of North America have felt the exact opposite of normal over the past few weeks. I am already exhausted from the constant upsetting headlines coming out of the Oval Office this week, as well as decisions made by our Nanaimo city council, and BC Liberal government. As a lover of women, the land, and rights in general, I know I am going to have to keep paying attention. Though the thought of this is exhausting, I find a strange kind of relief in remembering that this state of affairs has been created by humans. It is not a galactic force, some kind of universal rule that humanity would end up in this situation—we did this. Through divisive media, Facebook algorithms, and human psychology, we have arrived in this moment that is a new kind of “normal.”

As many, myself included, struggle to find our balance within the current media streams, it may help to remember that this situation did not suddenly appear. The ideas of racism, sexism, bigotry, and xenophobia that are currently being reported have been churning for decades. They are not owned or embodied by any single person or moment in time—even right now. We are finding ourselves at a glaring moment within a shifting baseline and, honestly, maybe we should be grateful to be given the opportunity to examine some social paradigms that are not working for anyone.

If you are unfamiliar with this idea of “shifting baseline syndrome,” it really is an amazing concept. It is a measure of change within a society, ecological system, or climate zone based on previous reference points, which are themselves changes from a previous point. That is not, however, what makes it a “syndrome.” This is where our minds come in, attempting to grasp at a continuum in constant change while also grasping at the idea that there is one, ideal moment which we can consider normal. This singular idea of normal is what has been powering the slogan “Let’s Make America Great Again!” When was it great? Most people, when polled, point to the 1950s—which is when no one but white men could open a bank account and most minorities could not even vote. This does not particularly make me want to grasp onto that time period.

Not that I am a media expert, but the way all these happenings have been reported on is equally disheartening.

As an avid patron of CBC, I can no longer listen to news reports, which have been taken over by American (i.e. Trump) news. Though these topics are important and do effect Canada in many ways, we should be wary of a developing an “Angel Complex,” whereby we make Canada seem greater than what it is. Recent and unfortunate developments in Québec City show this, as does the approval of the Kinder Morgan Pipeline and the ongoing Site C Dam construction. All of these points of contention are echoing the state of affairs of our Southern neighbours. The ongoing divisiveness between different “left-leaning” interest groups, sustained by Facebook users and general media outlets, continues to break apart hopes of supporting one another in common goals. The lateral violence occurring between individuals within and between good-intentioned organizations will not move their issues forward. Neither will meeting their “opponents” with hate. An eye for an eye has, historically, never worked.

Recent media releases from companies like Nike, Starbucks and Anheuser-Busch are a prime example of finding our common ground. In response to the recently proposed immigration legislation for the US, all three of these companies have responded in good will towards diversity, with Starbucks pledging to hire 10,000 refugees in its stores worldwide and Busch/Budweiser using its 60-second Super Bowl commercial spot to tell the story of founder Adolphus Busch as he comes to America as an immigrant in 1857. These are companies that I normally do not stand behind for a variety of reasons, but this is the time to come together over a shared sense of justice. I hope that other major companies come forward on not only this, but other inflammatory topics sprouting up in legislation, such as women’s health and queer rights. The duty of defending rights being taken up by these companies is, perhaps, a recognition that there is more to power than money, which is a new paradigm that I, personally, can stand behind.

Maybe, at this point, we should stop trying to find that idea of normal or trying to define who the enemy is, and instead appreciate and strive for change and learning together. I know I will not make it through the next month, let alone years, thinking of life or rights as a battlefield. No matter what stand one takes, whether a path to reconciliation or standing up for equality and rights, there should be space within one’s mind for learning something new and unexpected, to recreate your idea of normal—and yourself—again and again.