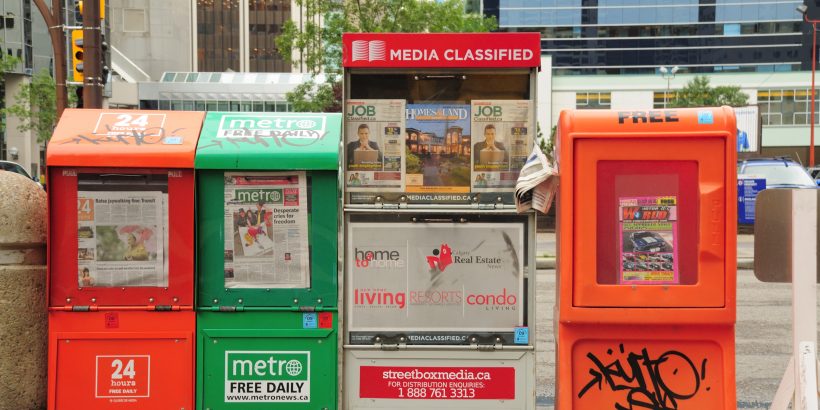 This month, journalism has taken another hit, with over 20 journalists leaving Postmedia newspapers: Vancouver Sun and the Province. This decision comes at a time in journalism when almost anyone can make news, and share it over and over without the need for an editor, fact-checker or publisher. This is the first time in newspaper-making history that journalists are not necessarily a key part in the sharing of information in our society.  We’ve come a long way.

As the stone turned to steel, and the relief turned to offset, the way the world gathered the news changed. Once, man could record the world news for public consumption, temporary oral traditions transformed.

From the Gutenberg Press in 1440, to the arduous lithographic process of stone etching, sharing stories in the beginning required tedious and methodical work. Over the next five hundred years, storytellers gradually created easier methods of printing word to page, and the booming interest in public journalism allowed for a future of citizen journalists on the web today.

Newspapers arrived in Canada prior to Confederation, in what was then known as British North America. South of the border, Philadelphia was the first to see a periodical, Publick Occurrences Both Forreign and Domestic, in 1690 with only one issue printed. In 1704, John Campbell published America’s first continual newspaper, the Boston News Letter.

Located so close to our eastern provinces, it was only a matter of time before we picked up publishing for the public. A press machine from Boston arrived in Nova Scotia, creating the Halifax Gazette in 1752. Moving west, according to A History of Journalism in Canada, the six most easterly provinces took on presses creating the Québec Gazette, Montreal Gazette and Royal Gazette and the New Brunswick Advertiser.

New France, what would later become Québec, was one of the most prolific areas in terms of papers. It would also be one of the only areas to have both English and French language presses.

It would take some time before Western Canada would see newspapers, but the presses in the east were gaining traction, seeing more and more pop up in the first half of the nineteenth century, like the Toronto Globe in 1844, later to become The Globe and Mail.

Circulation grew as America became our nation’s newsprint provider, rather than shipping in from Britain. As infrastructure improved, news could be shared much more easily between cities.

Victoria became home to Western Canada’s pioneer presses, the Victoria Gazette and The British Colonist, in the same year. It would take another two decades before the mainland would catch up, leading to the creation of The Vancouver Daily Province and The Vancouver Sun in 1898 and 1912, respectively. The latter two remain in print to this day, with The Province dropping “daily”.

The Vancouver News, a short-lived periodical among many at the time in the city, was known for its optimism and independence from politics. In the paper’s first editorial published June 1, 1886, the editor speaks to the future prosperity and “unparalleled possibilities” of Vancouver, followed with their values: “the News will be independent, the organ of no party or faction; aiming simply to promote honesty, economy and progress in municipal provincial and Dominion affairs.”

Many early newspapers followed strong non-partisan values, sharing their intention through editorials in their very first issues. Journalistic integrity was a new concept to many, yet the idea became a crucial indicator of where newspapers would develop in the next century. Politics were covered, but weren’t the sole focus for many papers in Canada.

However, newspapers were commonly purchased by political parties for their own advertising and campaigning. The Toronto News went to the Conservatives in 1908, and The Vancouver Sun affiliated with the Liberal Party of Canada.

Many enduring publications have been known for their conservative or liberal values, sometimes changing with the publisher.

Opinion and commentary were popular ways to share news in the beginning, and column-like letters were published in rural community papers like the Acadian Recorder in Halifax, on agriculture and farming.

By 1900, as much as 80 percent of revenue for a newspaper came from advertising. Their growth was exponential in terms of broadening readership of the working class, and creating interest with varietal stories.

Following the initial expansion and establishment of newspapers, the next decades would solidify the lasting names in print for Canada. Those that remain in print today competed from early on, either provincially or nationally.

In 1917, The Canadian Press was established, and newspapers across Canada can now share stories from around the world, giving the reader a broader view.

The Toronto Star had the stronghold on the east coast, but began to see competition from The Province and The Vancouver Sun as Vancouver became a predominantly newspaper city, with 11 opening for business in the late 1800s and early 1900s.

North American newspaper readership took a steep incline in the early 1970s, hitting a peak in 1973 following the creation of the Roland 800, which printed over ten thousand sheets per hour. Circulation hit a high at 5.7 million in 1989, according to Newspapers Canada.

The public had many more options with televised and radio newscasts, and competition with print began to take its toll.

Newspapers in Canada had an even tougher job to stay afloat, with a high demand for digitization and an increasingly damaging lack of funding, and more and more historical publications began transforming to better suit the needs of the modernized and engaged public.

The high cost of printing has never changed for newspapers, and to this day, creates a strenuous task for publications to provide a costly paper for their readers, even cutting their regular publishing schedule due to overhead.

Thus, creating the need for online journalism, and the advent of the subscription to online versions of a normally printed paper.

Within a few short years, newspapers across North America have fallen victim to the changing way we gather news, enough to generate a website dedicated to the Newspaper Death Watch, which chronicles each daily that has gone under since the site was created in 2007.

The list includes Halifax Daily News, and 14 others from the United States. Among the list, are W.I.P’s, or works in progress, papers that have had to cut their print frequency, or moved to an online-only or hybrid way of publishing.

The 21st century has managed to keep newspapers in the homes of readers, but as generations follow, new platforms for news are sprouting, competing with tradition.

Twitter, a social media outlet intended for immediate and brief interactions, has taken journalism back to the people. Not only are journalists sharing stories with the public, but vice versa, with citizen journalists sending in news tips and videos of events as they happen.

Sharing stories through mass media has created a connected world, one that will always require journalists to gather, research and provide balance.

After centuries of progress and innovation, newspapers have adapted to the climate of the changing world, yet cannot seem to catch up with technology and the installation of convenience on the web. Where Canadians get their news will impact journalists for years to come.