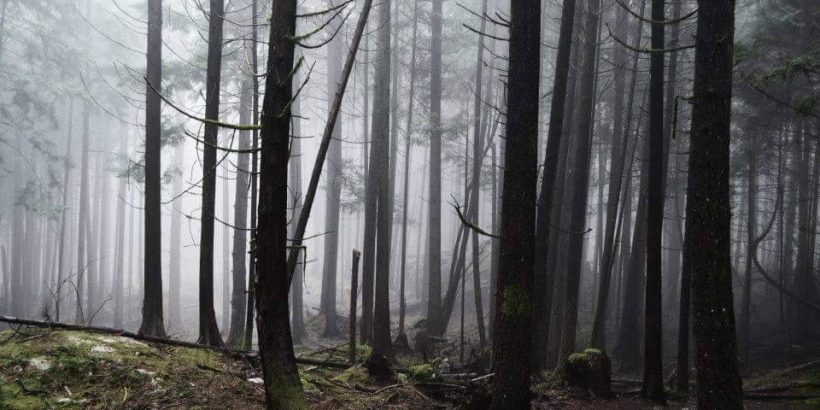 Above: There is unrest in the forest. There is trouble in the trees. 📷 Natalie Gates

On this beautiful rock we call Vancouver Island, we have some of the most spectacular and rare ecosystems in the world. I am not talking about VIU’s plethora of bunnies, or the amazing aquatic ecosystems that teem the coasts; I am talking about old growth forests. Some think of them as almost akin to boulders and dirt, but trees hold a spectacular array of living qualities and abilities that go above and beyond what even animals can do.

With the proper start, a tree can live for thousands of years. Some of the oldest trees in existence are almost as old as civilization, at 5000 years old. In an old growth forest, sometimes a tree that is 100 years old can stand only as tall as a person, because it is being shadowed by taller trees. This steady and stunted growth is important, though. The incremental growth of the trunk allows for the building of density, making it strong and resistant to fungus. Without this time-consuming beginning, a tree is much more likely to be taken out by disease, injury, or weather, long before it ever reaches 500 years old.

The ability to attain this promising start to life depends on the tree’s early upbringing. Trees are highly social, and one of the first, most important relationships made in an old growth forest is parental. The canopy of the parent tree often absorbs up to 97 percent of the sunlight coming from above, leaving just a tiny fraction for their children. Because of this, the saplings grow leaves with high concentrations of chlorophyll that are extra sensitive to sunlight, but also very bitter to herbivores. This protects them, and provides them with as much sugar as possible. The parent tree shares its sugar through its root system, nurturing until it falls and the saplings must rush up to take its place in the canopy.

The sharing of resources isn’t limited to family members. Trees share resources with all neighbours through their root connections. The connections aren’t direct, but made through symbiotic relationships with networks of fungus. This sharing is so extreme that some stumps will live for decades after being felled, surviving only on the nutrients given to it by other trees. This serves as community protection, or insurance of sorts. When a tree is injured and has to fight off a fungal infection, or a bark beetle gets in and starts to wreak havoc, the tree has to exhaust its energy stores to fight off the invader. The community of trees helps the struggling tree by providing it with much needed nutrients.This system of sharing and cooperation, even between different tree species, makes the forest stronger and more resilient to climate upheaval, disease, or invaders.

When fighting off invaders, trees must act quickly. If a pest finds that a tree doesn’t respond like it normally should, they set up shop and invite their brethren and, before long, the tree is covered. To combat this, trees have a number of techniques and tools available to them. They can produce toxic chemicals to deter or kill herbivores that try to munch on them, or antifungals that prevent opportunistic fungi from taking up residence in their trunks. They can also signal to other trees that there is an attacker by producing volatile chemicals which vaporize and float away in the wind, that are then sensed by nearby trees.

It was recently discovered that trees use electrical signals to communicate between different parts of themselves, much like an animal’s nervous system. These signals can start from the site of a bug munching on a leaf, causing a change in ion concentration, activating voltage based channels, and changing chemical production. This electrical signalling is similar to what happens in our own nervous system, and trees use receptors and channel homologous proteins, or share the same ancestor, with those in our neurons. The only major difference is that these signals, in the expected tree fashion, are very slow, travelling at a rate of centimetres per second, rather than the metres to hundreds of metres per second of our own neurons. In a tree hundreds of meters tall, this means that electrical signals can take quite a while to travel from the tip of the canopy to the roots, but trees aren’t in a rush, anyways.

The challenges met by trees often occur over the course of weeks, months, or years. When a tree falls down, opening a gap in the canopy, the battle to fill that space can last decades. Trees migrate, too, although they do so as a whole species, rather than as single plants. Depending on their method of seed dispersal, the speed of migration varies. Some species are still making their way north to preferred climates, and have been doing so since the end of the ice age. One of the strangest, slow-motion battles occurs when a tree’s bark is injured. If the injury takes more than three years to heal, the tree will almost certainly be fatally infected. When this happens, the tree is already dead, though it will take several more decades until it finally falls. Sometimes the tree can be almost completely hollow and still function, but any passing storm could be its last.

Even doomed or fallen trees form important habitats. Their rotting trunks form suitable habitats for various birds and mammals, such as raccoons and woodpeckers. Once fallen, new trees can sprout from their detritus, and the rotting mass feeds various insects and bacteria. More importantly than individual trees, a forest creates its very own environment. As part of their life cycle, trees release a large amount of water vapour from their leaves into the air, while releasing chemicals that help the vapour condense and form clouds. A large forest can create its own weather systems through this accelerated water cycle. Additionally, the shaded canopy cools the forest floor during hot summers, and the sheltering effect of the large masses of trunks helps reduce wind and keep the forest warmer during winter months. The more stable the environment, the better they are able to grow, reproduce, and thrive.

Trees have a wide array of techniques to withstand the extreme weather they must endure to survive for thousands of years. The most simple is the way they grow their branches. Branches curved in the right way can withstand the weight of rain, snow, and wind, or direct all rain down to their roots so they can drink as much as possible. During winter, trees dry out their trunks to avoid bursting due to frozen water, and during dry months they conserve water resources. Trees can even learn; if a tree goes through a severe drought it will conserve water more from that point on. In the event of extreme climate change, several trees that are unable to withstand the new status quo will die off, but the majority will adapt and survive, allowing the forest to continue on. Forests in the past have lived through climate shifts equivalent to the worst case scenarios of our current climate change, and survived because of the diversity of trees and the communities they formed.

Unfortunately, these old growth forests are disappearing. With global warming creating real impacts, these habitats will meet greater challenges. And, yet, these old growth forests are some of our most important carbon sinks and climate stabilizers. The fungal networks that connect trees and make them resilient and strong against weather and disease only show up in old growth forests. Tree nurseries and plantations are devoid of these sorts of organisms and helpers. Old growth forests also raise their trees properly, starting slow and small so that the trees can one day reach hundreds of meters, and over a millennium old. They provide habitats for a myriad of lifeforms, making the forest robust, resilient, and productive. The waste they produce in dropped leaves and needles feed the soil and the aquatic ecosystems downstream and into the ocean. They produce their own weather that keeps the west coast a wet temperate rainforest, and allow for a more stable and sustainable environment.

The value of these forests is immense, not only because of their ability to help stabilize local climates and provide habitats for whole ecological niches, but because they are a part of our cultural heritage. I cannot imagine a west coast without towering redwoods and the rain clouds rising from the canopy, and I truly hope I never will. A single tree is weak and vulnerable, but, united, a forest can last through even the worst of circumstances—kind of like us humans.