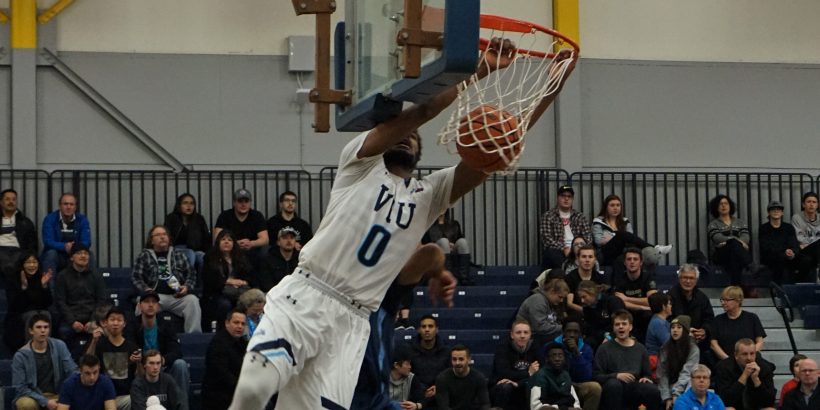 Above: Usama Zaid hangs sideways after slamming a dunk against Capilano. 📷 Cole Schisler

As the regular season wraps up, the Mariners are red hot from a 13-game win-streak, and are poised for success at provincials.

The Mariners have not lost a match since November 12, when the Langara Falcons edged out victory by a single point, winning 95-94, over the Mariners.

The Mariners have not scored less than 75 points in a game since their win-streak began, and the most points they have allowed against them in a single match was 79 points.

“The guys have been playing really hard for each other,” Assistant Coach Avneet Brar said. “We’ve been a cohesive unit in the second semester, and we’re doing a way better job on the defensive side of the ball.”

Coach Brar says that the team is practicing with high energy, and that the players have a hunger to win. The players encourage and challenge one another to play to their potential at practices. The Mariners have been working to control the pace of play during the games, minimize turnovers, and execute for the full 48-minutes of play.

Recently, the Mariners defeated the Langara Falcons 84-76, the Quest Kermodes 89-78, the Capilano Blues 93-73, and the Douglas Royals 75-59. On Thursday, February 16, the Mariners won their last home game of the season against their rivals, the Camosun Chargers, 102-76.

“I thought we did a great job of honouring our seniors and playing to their strengths,” Coach Brar said of the Mariners’ performance against the Chargers. “We had Kaz Kobyashi out there, who is a very hard worker, and Eric D’Andrea, who’s a very good shooter and a great teammate. We shot the ball well, and we were great about moving up and down the floor.”

The Mariners finished their season with a 95-78 win over the Columbia Bible College Bearcats, and will head into the post-season with a 16-2 record, which puts them comfortably at the top of the PACWEST division. With their win against the Bearcats, the Mariners secured a bye-week going into provincials.

“I think we have a chance to win provincials, as does every other team,” Coach Brar said. “We’re starting to play well and peak at the right time, hopefully we can keep it going and be successful.”