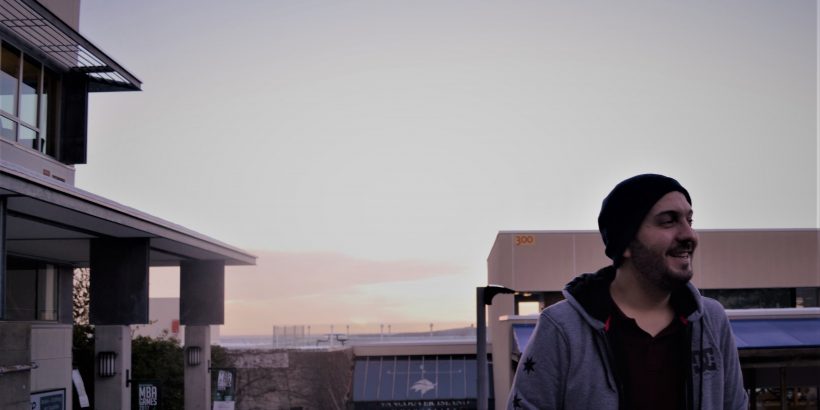 On November 6, 2015, the cafeteria was packed with students, staff, and media in anticipation of the VIU International Refugee Scholarship Fund announcement. A vow was also made to sponsor the school’s first refugee student from Syria through the local World University Service of Canada (WUSC) committee, in addition to the two students that are sponsored each year.

This year, as the last day of International Development Week wrapped up, Mohammad Tahhan, 26, darted around, cradling a camera and snapping photos of the events. A year ago, he was desperately awaiting his chance to escape the confines of the crisis.

An estimated 470,000 Syrians have lost their lives since the outbreak of the civil war in March 2011. There are about 13.5 million in need of humanitarian assistance within the country, and more than 11 million who have fled their homes since the armed conflict began. According to the United Nations High Commissioner for Refugees (UNHCR), 4.8 million have fled to Turkey, Lebanon, Jordan, Egypt, and Iraq.

Tahhan is considered Syrian because of his parentage, but he was born and raised in Jordan. In 1982, his father was working in Aleppo, Syria for the military, with most of his friends working for the Muslim Brotherhood of Syria, a political organization which pledges to “respect individual rights” and promote pluralism and democracy. The government was targeting those who worked for the Brotherhood, so, knowing he would be in danger, Tahhan’s father fled to Jordan.

Tahhan was born in 1990, and lived a “normal” life, integrated amongst Jordanian society until the civil war erupted, sending relations between the two countries ablaze. Some of Tahhan’s relatives in Syria moved to other countries, while others remained in the danger of Aleppo. “When the disaster happened in Syria in 2011, everything changed,” Tahhan says. “Syrians [in Jordan] were seen to be taking all the jobs, consuming all the resources, and no longer part of the culture.”

In 2012, Tahhan’s father decided he needed to go to Syria, and was soon captured and taken prisoner. His identification was confiscated and he was interrogated on everything he knew about his homeland. For a year and a half, he had no contact with his family; Tahhan, his mother, and his five siblings thought he was gone forever. Eventually, Tahhan’s father was deported to a Syrian camp in Jordan for about six months, before he was let out to live with his family again.

At that time, Tahhan was working for international organizations as a marketing and social media consultant. “Then it changed,” he says. “I was told I couldn’t work with them anymore because the organizations could no longer work with Syrians. I lost thousands [of dollars].”

Things got worse when Tahhan’s passport expired at the end of 2014. He went to the Syrian embassy in Jordan to renew it, but was told he would have to go to Syria to do so—of course, this was not an option because of the crisis. He no longer had any ID, and each time he found himself walking the streets after sunset, he feared the police would confront and interrogate him.

No longer able to work legally, he began to work under the table, freelancing as a marketer and social media specialist. As the conflict raged on, things became increasingly dim for Tahhan. His freelancing work eventually became unsustainable, a planned marriage fell apart, and his grandfather and cousin were killed by the bombing in Aleppo.

Tahhan knew he couldn’t stay in Jordan. While there were opportunities to study abroad, he would need a passport; as a Syrian, the options were especially limited. So he began a long stretch of late nights hunched over his computer, researching other options. He found many scholarship programs where students could go away for a few years, but must then return to Jordan. This would not do; he needed resettlement. Eventually, he stumbled upon WUSC.

He applied, but didn’t pass the English exam. He applied a second time with no luck. He applied a third time, even though, by that point, he exceeded the age limit of 18-25 years old.

“I just thought, ‘Oh my God. I’m going to have to stay in Jordan forever,’” he says. But he would not settle, and spent three days working on an email to WUSC headquarters, explaining his need to study in Canada. After a couple months, WUSC decided to make an exception to expand the age range so he and others could still apply. He continued working on his English skills, and eventually made it to the interview. At the end of 2015, he was told he was accepted and would be placed at VIU in Nanaimo.

Tahhan lets out an exasperated sigh, remembering that email. “Finally, I made it.” Yet, “making it” wasn’t as hard as saying goodbye to his country.

“Imagine you are born and raised in Canada and you must leave,” he says, gesturing around Jumpin’ Java and the students bustling around the library. “Every single memory, friends, and family are here. It was the same situation in Jordan.”

In the summer of 2016, as he worked through the paperwork, Tahhan was told he had to sign an agreement that he would never return to Jordan.

“Why?” He says now, a frustrated edge accenting his friendly tone. “I still cannot figure out why.” All the while, his mother was asking him when he would be able to visit again, but he did not tell her about the agreement. If he did, she would not have let him leave. Once he arrived in Canada in August, he finally confessed to his family. “For a month, they cried every day, asking ‘why.’”

The first night in his apartment on VIU’s residence, he did not sleep. He closes his eyes and puts his fingertips to his temples, silently wiping at the tears that begin to form as he recalls that night. “Every time I remember this moment, there are so many thoughts,” he eventually says before pausing again.

He blinks and adjusts his toque. “I don’t like the feeling that I am weak,” he says. “I want to feel strong all the time. I want to know exactly what I’m doing. I always have a long term vision. But that day, I did not. I didn’t even know what I was going to do the next day.”

After a couple weeks of quiet reflection as the summer wound to an end, he began to find solace in the new life he was starting, and excitedly began his first VIU classes, kicking off a major in Digital Media and a minor in Marketing. He says he hopes to start his own social media and marketing consultation business once he graduates.

“For years in Jordan, I didn’t think about my future,” he says. “But I can do that now. In Jordan, every day you are working, but there is no means for your life. You are like a machine, just trying to live as long as you can. But here it is different.”

His studies, social life, and a part time job as a VIU Student Ambassador of Social Media keep him busy, and time constraints make keeping up with family difficult. “But it is also hard to hear what they are still going through,” he admits. “I made it here, but what about all the others?”

Tahhan will be able to qualify for a Canadian passport and apply for citizenship once he has been in Canada for four years, but he still does not know if this will allow him to enter Jordan again.

“Many Syrians have disaster stories,” he says. “My story is just like a prototype for people that come from Syria to Jordan. Everyone is in the same situation, whether they are raised there or just arrived a couple years ago. As long as they have a Syrian passport, they can’t do anything.”

Recent events, like the USA travel ban and the Quebec City mosque shooting, also bring heartache for Syrians and other Muslims abroad. “I have some Syrian friends in America,” he says. “I get messages from Syrians in the States and all different countries asking how to get to Canada. It makes me think something really big is going to happen in Syria. I’m not sure what, but it’s something.”

Yet, Tahhan says he remains optimistic and certain that, if countries like Canada continue to keep their doors open to refugees, there is hope.

He looks out at the campus, now quiet and orange-tinged in the setting evening sun. For now, he has found a home in Nanaimo, full of peaceful ocean breezes, late nights studying, and many new, accepting faces.