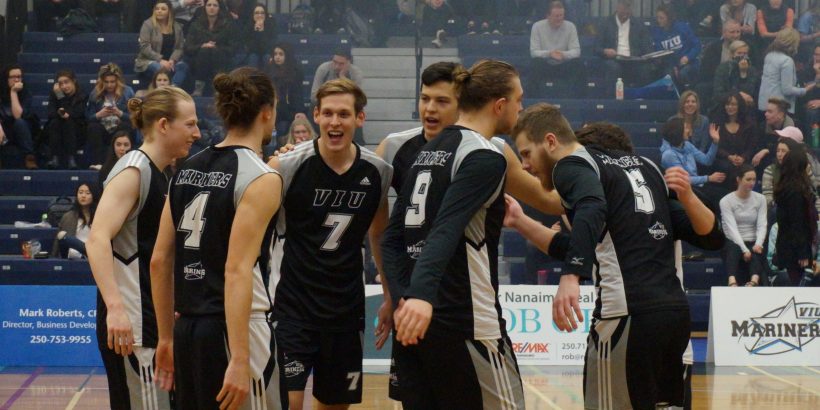 Above: The Mariners huddle to start the match. 📷 Cole Schisler

After winning against the Camosun Chargers 3-2 on February 17, the Mariners hosted their Vancouver Island rivals to end the season with a suspenseful 3-1 victory. Many Mariners alumni attended the game, and watched proudly as the Mariners won.

“You always want to finish the season on a high note,” Head Coach Abe Avender said. “With a crowd like this, that has over forty men’s alumni in attendance, it was nice for the guys to play at a good level, and come out with a win.”

To begin the match, the Mariners presented the inaugural Ryan Thibault Memorial Award to Mariners’ star power hitter, Zach Grigg, for his work ethic, academic achievements, drive, and leadership on the court. Ryan Thibault played for the Mariners from 2005 to 2011, and passed away last year after a battle with cancer. The award helped raise 10K in funds, which were matched by the VIU Foundation.

Coach Avender said the Mariners did an excellent job of limiting their service errors, which put pressure on the Chargers to make plays, and allowed the Mariners’ defense to capitalize on their mistakes. The Mariners defense came up with a pile of digs to keep the ball in play, and prevent the Chargers from scoring.

As the first seed going into Provincials, the Mariners will have the advantage of a bye-week, and will play against either the College of the Rockies Avalanche, or the Douglas Royals. Both teams are different, and the Mariners will adapt their game plan accordingly. Coach Avender is focused on keeping the Mariners’ momentum going through provincials.

“The hard work is paying off,” he said. “I comment all the time in the room about our snowball, and how big it’s getting. We’re adding to it every night, and it’s just gotten better and better.”