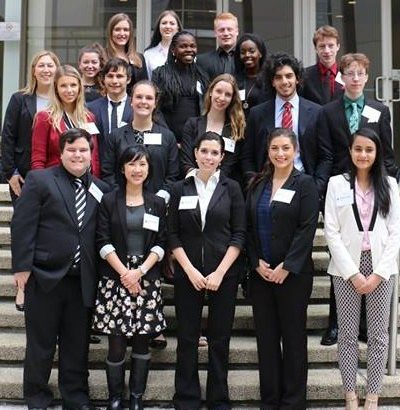 Above: The VIU MUN delegation at the 2016 UBC MUN conference in January. 📷 Sarah Abdulka

VIU MUN is looking to host its first conference on campus since 2011, with the theme “Taking Action on the Sustainable Development Goals: Tackling Climate Change and the 2030 Agenda”.

This conference is open to high school, and college clubs in the area, as well as all VIU students who are interested in attending as delegates for a weekend of diplomacy, debate, and international relations. Global Studies and Political Studies Professor Mark Williams has also created a directed studies course that allows club members to receive course credit for the organization of the conference.

“I am really excited to work with a strong group of our club members in helping to create and host our upcoming conference,” said Internal Relations and Club President, Justin North, who has been a delegate at four university-level conferences. “We want to provide our delegates the same fun educational experience that we all have had as delegates ourselves.”

The goal of the club is to use the upcoming conference to inspire incoming high school delegates, and encourage them to continue their MUN careers into university, and beyond into the world of international affairs, explained Secretary General Chelsea Bellingham.

“We are working to lay the groundwork for future conferences with VIU MUN 2017,” said Director of Finance and Corporate Relations Shantel Beute.

They also hope to establish an annual conference which is competitive with local conferences, and well-sought out from high school and undergraduate delegations in BC and elsewhere.

VIU MUN 2017 will be held April 28 – 30 at the Nanaimo Campus. For more information on committees, countries, and registration fees, visit viumun.org. If you are interested in attending as a delegate, email mun.viu@gmail.com or join the weekly meetings, Thursdays at 2:30 pm bldg. 356, rm. 317.