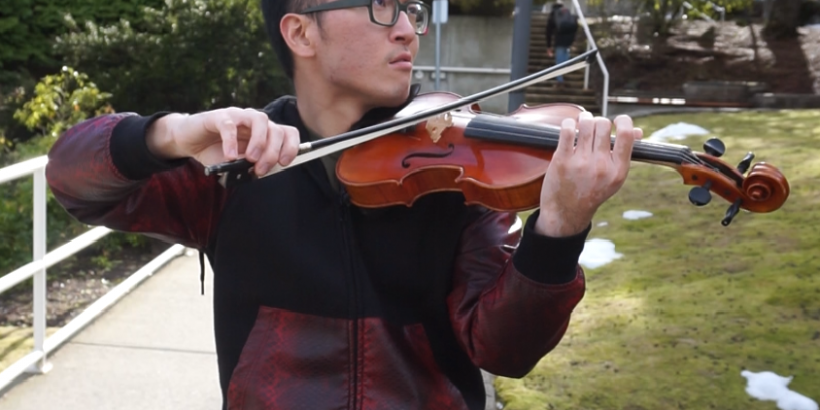 Even if you have never met Ray Chin, if you are a student at Vancouver Island University, it’s likely that you have heard him playing his violin around the bus loops, or outside the upper cafeteria.

“Here in Nanaimo the weather is beautiful. This kind of environment helps me to focus on my music,” Chin said. “I’m trying to connect with more people in general so I can develop my performance skills.”

Chin has been playing violin since he was six-years old; he is now 26, and studying education at VIU. Originally from South Korea, Chin was attracted to VIU because of the quality of their education program. While he is not studying music, he has been playing violin at a professional level for years. Chin sometimes collaborates with Philosophy professor and guitarist Oscar Clemotte, as well as students in the music department.

His style is inspired by compositions from the European Classical Era. When performing, Chin mixes classical pieces with his own, to make a uniquely beautiful composition. Sometimes, he plays pop or rock music, but prefers classical. One of the biggest influences on his style is Italian composer and violinist Nicollo Paganini, who composed complex violin pieces in the early 1800s. Chin has a slight interest in playing in a fiddler style, as he has gotten many requests to play “Devil Went Down to Georgia,” by Charlie Daniels, but classic remains his focal point for violin.  No matter what style Chin plays in, the response to his music has been overwhelmingly positive.

“People appreciate it a lot,” he said. “It makes me really happy because, globally, not all people appreciate music that much. Here, in general, people have been very positive.”

Chin is not keen on attending local open mics, instead his focus is on school, and entering serious violin competitions. He is not sure what his future holds, but he hopes it will involve violin.