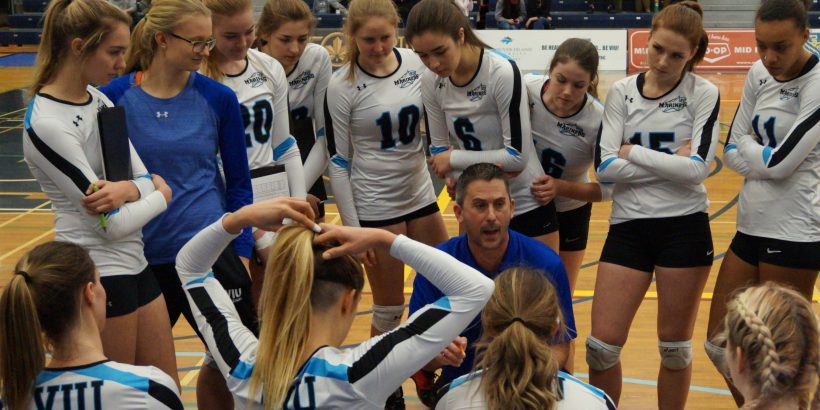 Above: The Mariners gather for a timeout. 📷 Cole Schisler

The Mariners ended their regular season with an impressive three-set victory over Vancouver Island rivals, the Camosun Chargers, on Saturday, February 18.

The match started with an emotional farewell to Mariners star power hitter Megan Rosenlund, who is finishing her fifth year with the Mariners. In a PACWEST All Access interview with Ryan Watters, Rosenlund said leaving the league is, “scary to think of, but I’ve been trying to stay in the moment, and practice each day with purpose.”

Rosenlund proved that purpose as the Mariners won in front of an energetic home crowd, filled with Mariners alumni, to end the season. The Mariners took the first set 25-22 over the Chargers. The Mariners let their foot off the gas in the second set, but managed to keep the Chargers behind with the same 25-22 score. In the third set, the Mariners ran away with the match, and ended the set 25-13, to take the match in three straight sets.

The Mariners displayed a near-perfect defense, and boasted many successful blocks to keep the Chargers down. Cattie Hegglin played strong through the middle, Kelsey Hutt held down the defensive end at libero, and Megan Rosenlund played well as always; overall, the team played well as a unit, with flawless chemistry and communication.

“Our team excels the most when we’re at this point,” Head Coach Shane Hyde said. “We’re really happy with how we finished, we’ve finished strong these past few weeks and we’re ready to go for provincials.”

With a winning record of 19-5, the Mariners lead the PACWEST division, and will enjoy the advantage of a bye-week going into provincials. Depending on who wins in the first week, the Mariners will face either the College of the Rockies Avalanche, or the Fraser Valley Cascades. Coach Hyde is focused on facilitating a fun, competitive environment for the Mariners during their bye-week.

“They’re a really good group of girls, and they work hard together,” Coach Hyde said. “The team is feeling really positive, and we’re ready to get on with the real games.”

Many Mariners from last year’s National Championship winning team are on the roster this year. At the end of a superb regular season, the Mariners are poised for success at provincials, and beyond.