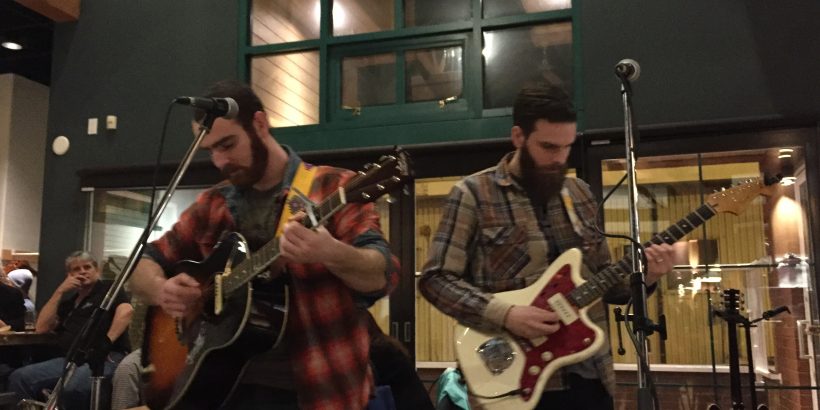 Engaging the whole audience from the first song, Louis Patterson proved his merit as an emerging folk artist. With deep growls and soulful soft tones, his lyrical poetry became smooth and sensual on the waves of folk guitar. Powerful lyrics from original pieces hung in the open room.

“I could drown myself in darkness, or I could breathe out the light.” This understated and humble guy, dressed in red flannel and jeans, told a relatable story with every song he played. “I had not seen just a vision, but myself in better light.”

With a contagious smile, Louis paid homage to the greats, adding his poignant lyrics to the conversation in a big way.

Halfway through the show, Louis invited Dane Letourneau to share the simple stage. Dane, a long established local musician, joined Louis and later played a solo set for the first time in months. Audience members were ready for his return, and sang along to familiar acoustic hits from Gold and Shadow. His chill vibes and smooth vocals added to the raw aesthetic of White Sails.

Dane announced that this show would be the first in a Friday night series moving forward at White Sails, marrying Cask Fridays with acoustic local music.

Louis and Dane’s next show will be on March 3 at the Dinghy Dock Pub.

The Bad, Lovecoast, & The Stacks

As patrons arrived, the diversity of the crowd increased. At The Queen’s in Nanaimo, a full house awaited three Island-based bands.

The Bad, based out of Victoria, BC, kicked off the show with hard hitting lyrics and slick rock riffs. They brought back big house classic rock to get the crowd’s energy up.

The Stacks had patrons on their feet. Before the first song was finished, the floor was so crowded there was little room for dancing. From the first note, the audience was completely engaged.

With a strong following in Nanaimo, attendees sang along to local hits, like “The Things I Do For Love” and “Cold Glass of Water”. With complicated licks and synchronized light show, The Stacks play like seasoned professionals.

Lovecoast closed out the night with their signature sound. Folk collided with rock on the stage of The Queen’s, as the dance floor grew crowded. It was a treat for anyone who was a first time listener, and easy to see why Lovecoast snagged the headline at Hometown Hockey, February 25-26.