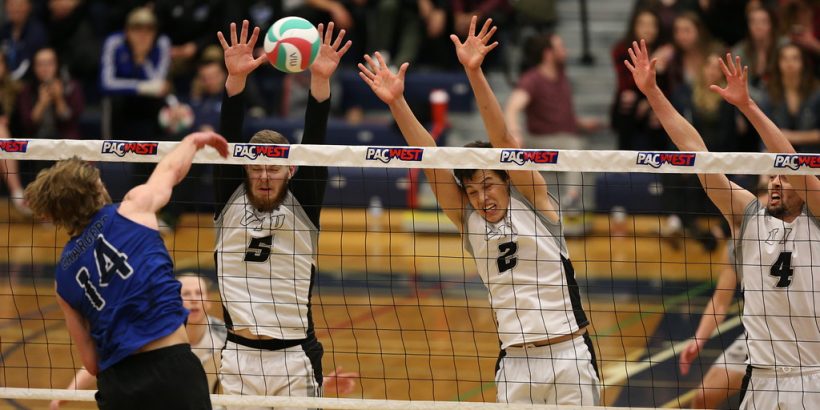 Above: The Mariners front line jumps up to make a block.

Despite taking silver in the championship match against the Camosun Chargers, the Mariners secured their wildcard spot by beating the Douglas Royals in an exciting three-set match.

In their match against the Royals, the Mariners were charged up; fresh from their first-round bye, the Mariners had something to prove. The two teams battled in the first set, the teams traded points back and forth to tack the tally up to 31-29. The Mariners finished the match by taking the remaining sets 25-19.

“It seems like we’re peaking at the right time and it’s all coming together,” Mariners’ power hitter and PACWEST All-Star Zach Grigg said after the match. “Now that we just booked our ticket to nationals, the monkey’s off our back.  We’ve got a really good group, and the guys are executing well.”

“The good news for us is that the big pressure match was the semi final,” Coach Avender said. “There was still a ton of excitement this week in training; the thing with nationals is that you don’t need to motivate teams going to nationals. The guys have been ready to go all week.”

“They have a really good outside attack, they use the back row a little bit, like us,” he said. “Their middle and right side have moments in games, but on their left side is their big finish guys too.”

While the Mariners are focused, and looking forward to nationals, Coach Avender wants to thank all of the fans who came to watch the Mariners over the season and showed their support, especially at the provincial championship.