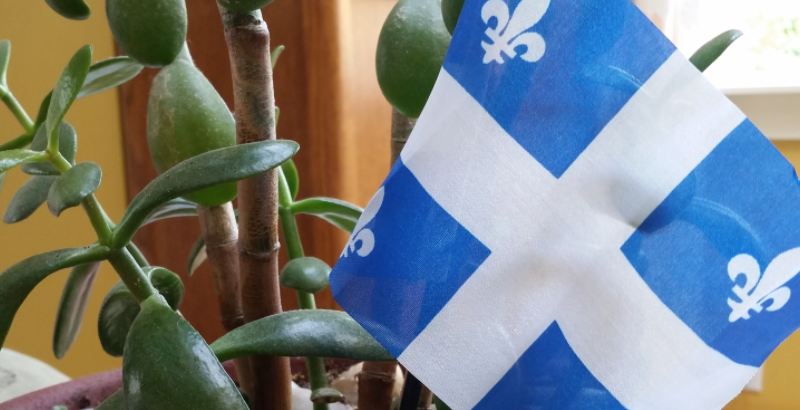 Features, In Focus
The fleur de lys, found on the Quebec flag, is a symbol for francophones everywhere. 📷 Catherine Charlebois

French Canadians and anglophones have a fairly long history of disagreement, and though it has largely died down, small snippets of longstanding unease remain throughout society. From snide remarks in schools to gaps in service, being a francophone on Vancouver Island has its struggles.

I moved from Montreal when I was five, and have lived in BC for the past 16 years, but I still consider myself Québecoise. Though I may have been uprooted early on, the staunch belief in the importance of my culture and language has been ingrained in me throughout the years, most adamantly by my mother. I still speak French at home, but my life is exclusively in English everywhere else, and I feel my native tongue slowly, but surely, slipping from my grasp. Talking is usually no problem, though I sometimes struggle to find specific words. Paradoxically, even though I haven’t dreamt or thought in French since I was 10, when I am tired, my brain will switch back to French, and make me search for English vocabulary, only to find their French counterparts in my mind’s eye.

I know many, including myself, who, especially in their teenage years, rebelled against their French heritage. Being in an English environment, with school, work, friends, and services almost exclusively in English, it was hard for many of us to see the point in nurturing our French. We wouldn’t need to use it in everyday life, so why put in the extra effort? Something that struck me as I was going through this phase was all the times my mother and I were approached by older ladies who overheard us at the supermarket. They would tell my mother and myself to “keep it up,” and urged my mother to make sure I didn’t abandon my roots. They showed a genuine regret at having lost their ability to speak the language and showed me how consequential the loss of one’s culture could be.

To other students, we were overwhelmingly privileged. If you compare the funds stretched for a thousand kids in an English-only school, versus the 60 that were in mine, there are bound to be some discrepancies. I wouldn’t mention being francophone to anyone until I knew them well enough, as it wasn’t unusual to hear students complain and make snide comments about the ‘fucking French kids’.

Bullying aside, as francophone students, we did get more opportunities than the other kids in our school, especially for travel. Since francophones in BC are so few and far between, the Conseil Scolaire Francophone (CSF), in conjunction with the Conseil Jeunesse Francophone de la Colombie-Britannique (JCF) tries hard to instill a sense of community in their students, offering school dances, francophone retreats in other provinces, and other events over weekends a few times a year. By graduation, most francophone students throughout the province pretty much know each other by name, especially those that have taken advantage of all the outing opportunities.

Francophones, as a minority, face opposition in BC, both political and societal. Though many anglophones usually hold a fascination with our bilingualism and, in some cases, our wacky sounding accents, there is still a divide in equity when it comes to the French language in BC.

As an anglophone in BC, there is no question that services will be offered in English, yet those same services are rarely offered in French. Likewise, bad translations on product labels and even on government buildings in the local community shows discrepancy in standards held for the French language from anglophones.

The discourse in general politics has always seemed to antagonize Quebec for its adamant demands for equal representation for their language. In the past years, this pervasive shunning has seemed to leak its way into Quebec culture. Everyone wants to learn English, and it is now considered ‘cool’ to speak English in Montreal, even if it is horrific in execution. The last time I went to Montreal, I ordered some food and was replied to in English for the entire transaction, despite asking in French. It seems like the struggle lies not just in BC, but nationwide.

To this day, my French heritage still shows up in subtle ways, even though my ties to it are fairly limited. When I speak English, I will misuse expressions, or have a different way of phrasing things, a quality typical of bilingual speakers.

It shows up in my writing, the way I talk, yet it’s a quirk I would never want to change. I may not have my mother’s strong accent, a residual from her first 30 years in Quebec, but I get a small twinge of pride when people tell me they hear it in my voice.

I hope to see a future where Francophone communities hold even stronger ties, are free from prejudice, and have greater equality within society. We may not have to fight for it as boldly as our ancestors, but I know that my children will carry on my heritage, no matter what language their father speaks, and that when we visit my parents, they’ll be called Grand-Maman and Grand-Papa.