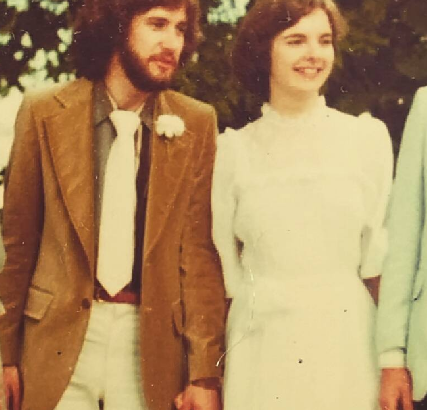 Robert and my mom on their wedding day in 1979. 📷 Courtesy Molly Barrieau.

Disheveled hair sits forlorn above a thin and angular face. Long fingers grip the seat of the chair beneath him, as the sinew and muscles seize from wrist to shoulder blade in one swift uncontrolled motion.

“I feel like a puppet, and someone else is pulling the strings,” he says, indignant.

Rarely do the edges of his mouth curl anymore, as synthetic dopamine now replaces the long dead cells, directing his tired brain. The drugs kick in and he can no longer sit.

Parkinson’s Disease affects over 100,000 Canadians, as the second most prevalent neurological disease after Alzheimer’s. Dopamine is depleted, and the four major symptoms begin to appear: Bradykinesia (slowness of movement), tremors, muscle rigidity, and change in gait (walking).

His lean body, erect and hunched, pivots as his arms swing wildly with his words, loud and messy. He knows just what he wants to say to me, but his jaw has yet to loosen its grasp on the words. He trusts me to finish his sentence, not with the words he intended, but good enough.

His small frame is emphasized by the calories he burns in constant movement. “I can’t keep weight on,” he says, attempting to eat leftover apple pie from Thanksgiving. My mother shows me a photo of them from the early ‘80s, the colour has faded, but their smiles haven’t. They are attached at the hip, tall and slender, with mops of matching brown shaggy hair and concert tees. They were in their early twenties,  living in Edmonton.

They had married and divorced before I came along. It wasn’t until my family moved to BC, where he was working for the Ministry of Forests, that they reconnected, and he told her about his diagnosis.

That’s when I met him. Having no prior knowledge of this man before the disease claimed his body, he became a face for Parkinson’s, a disease I also knew nothing about. It didn’t take long to notice how intelligent he was, what information was trapped in his mind. He has since become a good friend and storyteller of my mother’s life at my age.

Parkinson’s Disease, contrary to other brain diseases, rarely affect memory. Luckily, all information that Robert learned during his university career is retained and still very much alive in his mind. Unfortunately, in 2005 he could no longer keep his job at the Ministry of Forests, knowing full well that his brain was capable but his body was creating a blockade between his independence and the Ministry’s ability to accommodate his disability.

Regrettably, escalation of the disease for Rob occurred when he was working at a water treatment plant, where mercury was used in large vats. Upon opening the door, mercury vapours were breathed in on a consistent basis. This dense contaminated air allowed a much different dose to accumulate in Rob’s brain, unlike the minute dose from fish. It is not certain, but he believes this intensified the inevitable process. Receiving a diagnosis before age 40 is considered young onset, Rob was 38.

In total, Robert spent 18 years at university. He earned his PhD in Hydrology from UBC in 1995, the same year as his diagnosis. Amidst the stress to complete his thesis, Robert noticed his hands shaking.

“I couldn’t eat soup.” He says, lifting his hand and shaking the imaginary spoon. Like many others, the doctors told Robert it was a mild tremor, nothing to worry about. The first symptoms had actually appeared much earlier, when my mother was married to him. She recalls his lethargic attitude after class, blaming it on their new colour TV. Replacing it with a monochromatic version didn’t seem to help, Rob fell asleep at the drop of a hat.

Fatigue, laziness, and passivity are all symptoms of Parkinson’s Disease because the “chemical cousins” to dopamine are also affected. Noradrenalin and serotonin help regulate our mood, and the loss of these can produce a feeling of tiredness, and a swing in behaviour like erratic crying, or bursts of laughter. Studies have shown that even before physical symptoms like tremors appear, mood swings are an early signifier of dopamine loss.

Soon after his diagnosis, Robert was told by his doctor in the early stages that he may experience these changes in emotion, typically shown in sudden bouts of crying. In the middle of field work, drilling water wells, he remembers the opposite, uncontrollably laughing.

Dopamine, the messenger that depletes in Parkinson’s Disease patients, is known to control our brain’s “reward and pleasure center”. The small gaps between our nerve cells are jumping off points for dopamine, which will attach itself through the synapse. Dopamine is electronically released when we feel pleasure. Usually associated with food, sex, and drugs, popular media regularly references dopamine as a negative chemical which allows for addiction. Increasing its level in the brain on an exponential and dangerous level can create a need for consistent unnatural dopamine.

“I was born with a steering wheel in my hands,” Rob jokes. Aside from levodopa and marijuana, Rob treats his Parkinson’s Disease by driving. Normally, someone battling tremors and muscular seizure shouldn’t drive, but Rob has found that controlling a car allows him to control his own movement. Driving provides an independence unparalleled for Rob, who depends on the care of others to get through the day. “Most of my memories are of travelling around,” he says, his family road tripped across Canada, and my mother joined him on many others throughout their marriage. These days, she worries, “I don’t know what he is able to handle, and that is difficult”.

He stands, slowly shrugging on his leather jacket, and looks at me, his tense hands holding his keys. “Can you wait with me?” He asks, “I don’t think I can drive just yet.”

The latter half of his life has been spent navigating a reinvention of self, learning to cope and adapt to a new world created for him by his brain. A man struggling with an illness that has no cure, working so hard to own the disease, not letting it drive him. Rob has learned to treat Parkinson’s Disease personally, and know the disease as it affects him personally.

He sits across from me, his hands in the air contorting as he animates how he feels. He tells me it feels like there’s an “evil person back there,” motioning to the back of his head, laughing, “flipping a switch whenever, making things worse.”