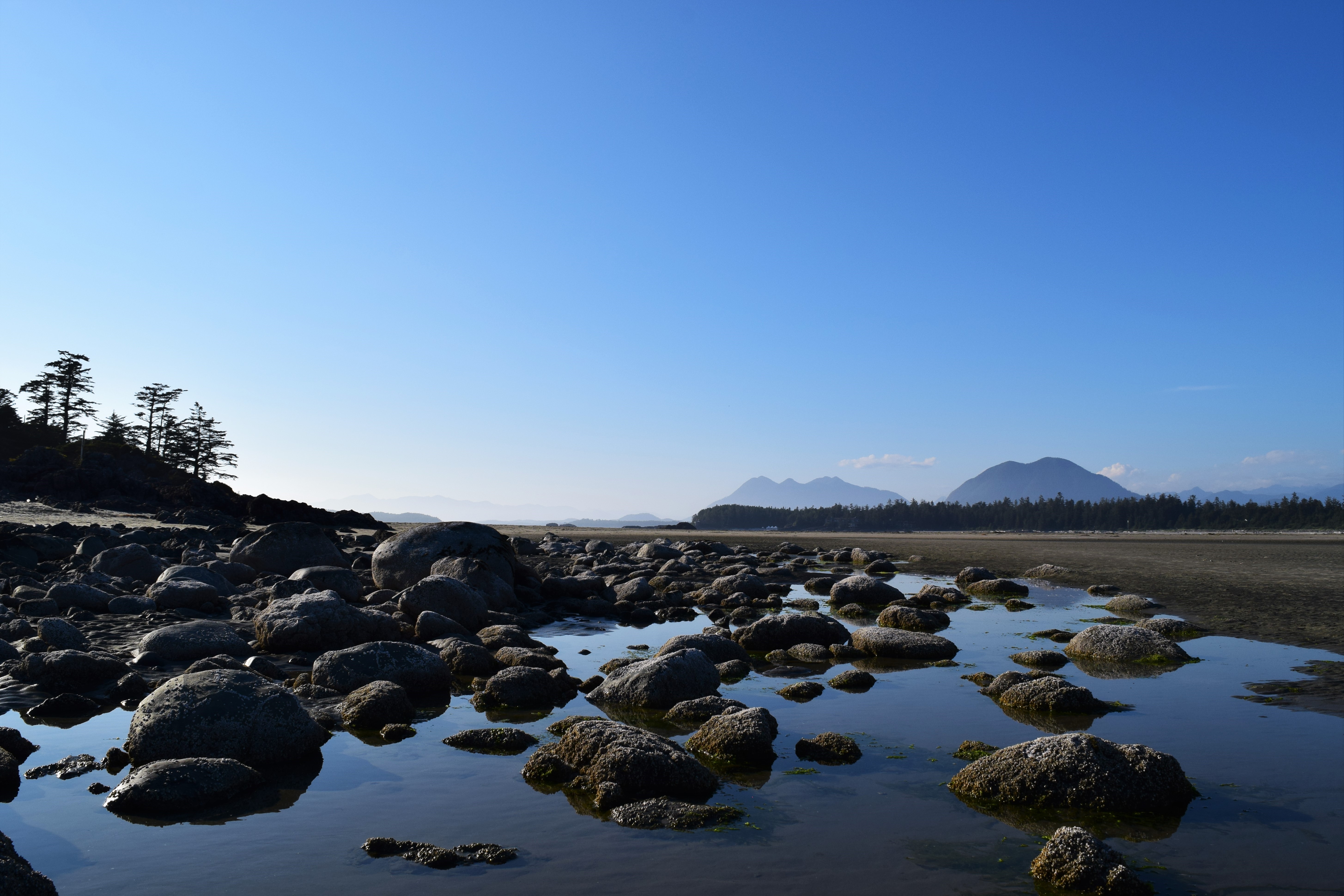 Despite what most Canadian maps seem to suggest, Vancouver Island contains more than just Victoria and Nanaimo. The following off-the-beaten-path towns and parks are only a car drive (and sometimes a ferry ride) away from our Nanaimo campus. From skiing, surfing, hiking, and storm watching, to enjoying good food in scenic small towns, the Island has something for everyone.

Just a half hour from Nanaimo, Ladysmith is famous for Transfer Beach, one of the most well-known beaches on the island. The rare sandy stretch sports a water park, beach volleyball courts, and a breathtaking view of the ocean. Ladysmith is also the location of several hiking trails, including the Holland Creek trails, Stocking Creek Trail, and Heart Creek Trail. Within the downtown are an array of small businesses selling everything from candy, to baked goods, to jewellery. (Seriously, try the cinnamon buns at Old Town bakery, they’re amazing.)

Just a few minutes past Ladysmith is the seaside Chemainus, one of the prettiest small towns on Vancouver Island. The businesses in Chemainus’ quaint downtown are bedecked with murals and vintage storefronts. Among the entertainment on offer is the Chemainus Theatre, one of the Island’s most popular professional theatres, along with a Christmas store, a classic candy store, and a myriad of antique stores. Close to the town are also public beaches, both on the ocean and the nearby Fuller Lake.

An hour’s drive from Nanaimo, Cowichan Bay is another small Cowichan Valley town known for its eclectic collection of shops and restaurants. (They have a store dedicated solely to selling cheese.) The calm waters of the bay make Cowichan Bay the perfect place to kayak or stand-up paddleboard, and are also an anchorage for many uniquely built floating homes. The town is also known for having some of the best seafood restaurants on the island, and in 2009 became the first North American town to receive the Cittaslow designation for sustainable living.

Not to be confused with Cowichan Bay, Lake Cowichan is only an hour’s drive from Nanaimo. It was recently featured on CBC’s Still Standing, and is known for its music festivals and, of course, its lake. At 34 km long, Cowichan Lake is the second biggest on the island. Over a dozen public beaches line its shore, offering picnic areas, swimming, and kayaking. Tubing is one of the most popular tourist attractions, and it is not uncommon to see the Cowichan River (which runs through the town) filled with inner tubes on hot summer days. Close to the town are several places to hike, the most popular being the trail up Bald Mountain, which provides a breathtaking view of the water below.

The town is also home to Laketown Ranch, which hosts several music festivals each year, the most well-known being the country-themed Sunfest.

Port Renfrew is just over two hours from Nanaimo and is one of the Island’s only towns located on the western coast. Its proximity to the Pacific Ocean makes it an ideal location for surfing and storm watching, as well as beachcombing. The most well-known beach is Botanical Beach, which is home to a myriad of seaweed species, as well as tidal pools and unusual rock formations. Port Renfrew is also known for its old-growth trees, which can be viewed at the nearby Avatar Grove, a park containing a forest boardwalk and the world’s gnarliest tree.

A small town in the Cowichan Valley, Shawnigan Lake is an hour’s drive from Nanaimo. The lake the town shares its name with is perfect for fishing, kayaking, stand-up paddleboarding, and swimming. Shawnigan Lake is famous for being home to the recently-restored Kinsol Trestle. It is the largest trestle on the Cowichan Valley Trail (a section of the Trans Canada Trail), and provides an amazing view of the Koksilah River. Several hiking trails are located within Shawnigan Lake, such as the Koksilah River Provincial Park trails.

While not technically part of Vancouver Island, Salt Spring Island is less than two hours away by car and ferry. Salt Spring boasts a large seasonal outdoor market, which sells everything from rugs, to kombucha, to pottery. Salt Spring Island is also home to vineyards and farms, as well as several provincial parks. Head up Mount Maxwell for a gorgeous view of the sea or drive to Ruckle Provincial Park for an easy hike to the beach.

The twin communities of Parksville and Qualicum Beach are less than forty minute’s drive from Nanaimo. The small seaside towns offer scenic beach access and hiking trails. Little Qualicum Falls features a waterfall, picnic area, and campground, while the Horne Lake Caves Provincial Park is the Island’s go-to spot for spelunking, and Spider Lake Provincial Park is a small lake perfect for kayaking. For thrill-seekers, sky-diving is a popular tourist pursuit in Qualicum Beach.

Located on Vancouver Island’s east coast, Campbell River is a one and a half hour’s drive from Nanaimo. Known as the “Salmon Capital of the World,” every autumn the creeks and rivers burst with spawning salmon, making it the best time of year to see bears, eagles, and other wildlife. Campbell River is also a popular whale watching and hiking destination—some popular trails include the Ripple Rock Trail and the Rotary Sea Walk. Another popular sight is the Elk Falls Suspension Bridge, which takes visitors over the scenic Campbell River Canyon.

Coombs is a small community located approximately 40 minutes north-west of Nanaimo. The roof of Coombs Old Country Market is home to a family of goats, hence why Coombs is also known as “Goats on Roof.” The Market sells an array of products including international gifts, food, and many other specialty products. Coombs is also known for having the largest selection of ice cream flavours on Vancouver Island—over 70. The nearby Butterfly World is another prime attraction, offering visitors the chance to stroll through gardens filled with butterflies from all over the world.

One of Vancouver Island’s ski resorts, Mount Cain Ski Area offers affordable day passes and, according to mountcain.com, the best powder on the Island. A three hour drive from Nanaimo, Mount Cain is a bit of a trek, but it’s the perfect destination for skiers and snowboarders looking for quieter slopes.

Just over an hour from Nanaimo, Port Alberni is located near several natural wonders. MacMillan Provincial Park’s Cathedral Grove, containing some of Canada’s tallest trees, is only a 20 minute drive from Port Alberni. Port Alberni is also located near several lakes, including Cameron Lake and Sproat Lake, which both offer swimming and fishing opportunities. Another destination is “Hole in the Wall,” a giant man-made hole through a shale cliff, complete with a waterfall. Stamp River Provincial Park is also popular, as salmon can be seen jumping up the fish ladder falls during spawning season.

Tofino and Ucluelet are two of the most well-known of the Island’s small towns. Approximately three hours from Nanaimo, both of these destinations offer a myriad of things to do for the outdoor enthusiast. Whale and bear watching, storm watching, surfing, kayaking, swimming, beachcombing, and hiking are just a few of the activities available in this area. Sandwiched between Ucluelet and Tofino is the world-famous Long Beach, as well as several other beaches including Chesterman Beach and MacKenzie Beach.

Just over two hours from Nanaimo, Strathcona Provincial Park is the largest provincial park on the island and the oldest provincial park in BC. With over 40 hiking trails, Strathcona is a haven for hikers and backpackers. Glaciers, waterfalls, mountain views, and small lakes dot the landscape, providing endless opportunities for nature lovers. Rock-climbing, cross-country skiing, and camping are all popular activities within the park.

Sointula is another destination off the island, but it’s only a 25 minute ferry ride from Port McNeill. The total trip from Nanaimo takes just over four hours, but the remote town located on Malcolm Island is worth the trip. Sointula was established by Finnish settlers in the late nineteenth century, and is the perfect place to hike, sail, fish for salmon, go whale watching, or just enjoy a good view.

This list covers only a few of the many communities and parks on the Island. Explore Vancouver Island today to discover more.