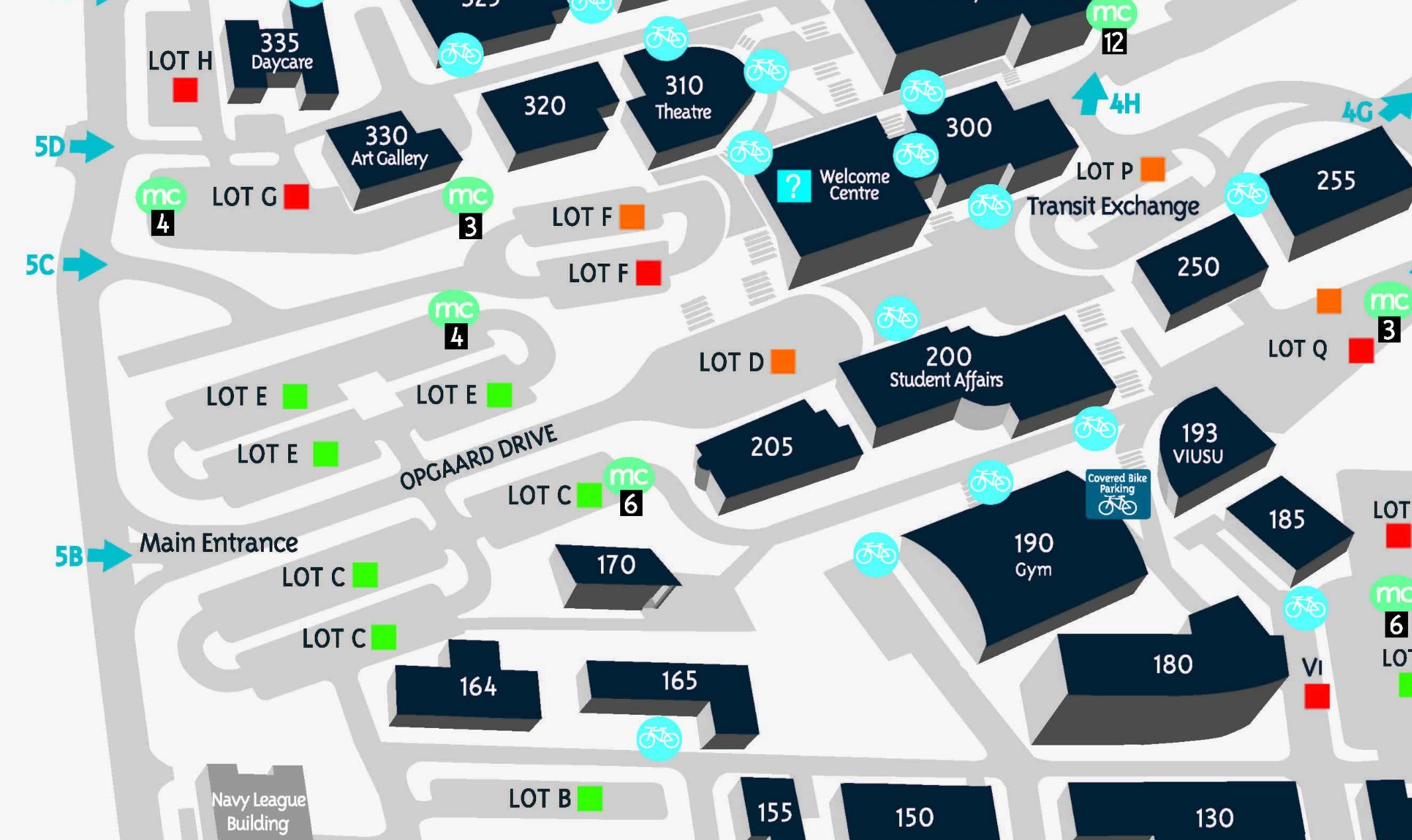 So, after two and a half years of not owning a car, I finally decided to bite the bullet. I bought a 2007 Suzuki Swift. It’s an adorable little hatchback with all the horsepower of a sewing machine engine. At first, I mused about how easy it would be to park my little car — but then I remembered that I go to VIU, and from the horror stories I’ve heard, parking here is anything but easy.

Sarah Segal, Student Advocate and Organizer with the VIU Students Union (VIUSU), has heard many complaints about parking.

“I’ve had multiple students come to discuss concerns about parking on campus,” Segal said. “Primarily it’s that they can’t find parking. I’ve heard from students who have bought year-long parking passes who are really frustrated because they feel like they’ve paid for parking, and when they arrive to campus, they are unable to find parking.”

Due to this lack of parking, Segal has heard from students that they have been late to classes or missed them all together. There have been instances where Segal has scheduled meetings between administrators and students where the student missed the appointment because they could not find parking.

“Initially, what I was hearing from students is that any time between 8:50 am until 2 in the afternoon that there wasn’t parking available on campus at all,” Segal said.

In her conversations with the university, Segal says that their response indicated parking is more of an issue in September, and that the problem of parking alleviates as the school year continues because less people are coming to campus, or people make alternative arrangements for transportation. The university indicated that they are monitoring the situations, and considering what steps to take in the future to address campus parking needs.

“I certainly have not had any complaints this week about parking, so it does seem like the situation is easing up a little bit,” Segal said. “But that doesn’t provide much comfort for all of the students who were impacted in September, and presumably the same issue will happen again at the beginning of each new semester.”

“It’s frustrating to say the least,” Nathanson said. “I’ve been a student here for four years and I’ve noticed it getting worse year by year. I talked to people who went here 10 years ago, and they said it was an issue then.”

Nathanson has a parking pass and has had one for his entire time at VIU. He says he usually does find parking on campus, but that if he is unable to, he gets frustrated and goes home. After complaining with friends about the issue, one joked with him that he should start a petition.

“I started it to see how many people it was affecting. The petition gained a ton of support in a couple of days, and so it started to look like an issue that had to be dealt with.”

Signatures for the petition have tapered off since the end of September. Despite that, Nathanson says that he is seeing more real support around the issue. Administration, faculty, and the VIUSU have all been talking about it, and a story about the petition was featured in the Nanaimo News Bulletin. Nathanson has been invited to talk to the VIU Board of Governors at their next meeting about the issue, and is looking forward to voicing his concerns with the administration.

“I’d like to see an actual plan,” Nathanson said. “I’d like to see more involvement than just throwing money at the issue. I don’t think building a parking garage would solve the problem. That’s more like putting a bandaid on the issue.”

According to Richard Lewis, VIU Director of Facilities Services and Campus Development, a parking garage is a part of VIU’s 50-year campus master plan. The possible garage would be built near the new gymnasium. Students can expect the new gymnasium to be built far sooner than the possible parking garage. However, Lewis believes there are more effective ways to address the issue of parking.

“Parkades are very expensive,” Lewis said. “So, someone would have to decide at some point that it made financial sense to do that. At this point it’s in the campus master plan as a 50-year resolution.”

Lewis says that VIU has plans to encourage the use of public transit, as well increase the amount of bicycle parking. He says there is also a plan to build more student residences on campus, which will help lessen the number of commuters. As new buildings spring up around campus, however, the availability of parking will decrease.

“One of the things that’s making parking more of a challenge this year is that we have three major construction projects on campus,” Lewis says. “The pain we feel this year is probably more than what we’ve felt in previous years and future years because of that construction.”

While the new buildings will decrease some of the supply of parking permanently, more spots will become available when fencing around new buildings is taken down. In the meantime, VIU has tried to balance the streams of employee parking and general parking to accommodate the loss of spots. Last year an employee lot was swapped into a general lot so that availability between the two is relatively equal, and Lot O, which is in the Student Residence parking lot, was changed to partial general parking.

“In response to the demand we had this September we are in the process of hiring somebody to do a Transportation Demand Management Study,” Lewis says. “That will look at cycling, transit, carpooling, and driving to give us a good picture of the situation and some ideas of what we can do to improve the current situation.”

Lewis says that the Transportation Demand Management Study will address concerns raised by the petition, and that the petition has been very helpful in bringing awareness to the issue of parking on campus.

“We need to do a better job of informing students about parking challenges,” Lewis says. “We’re going to take some steps to promote and grow carpooling, cycling, and supporting infrastructure to reduce demand. At the end of the day, we’re still constrained to our 92 acres on this campus, and we’ll manage it as best we can to ensure there’s a good balance of parking for everyone.”

This is not a new issue at VIU. Despite moving toward a solution in the future, there is still a problem to be dealt with now. Fortunately, there are some measures students can take to help find a place to park in the meantime:

Making the time to come to school early is sometimes difficult, and it’s likely that you’ll spend the same amount of time looking for parking as you normally would. However, showing up earlier greatly increases your chances of making it to class on time. If your class is between 8am – 2pm, parking will be difficult to find, and you may need to find parking off campus.

Park Further Away from Class

There is more availability in the economy lots at the top and bottom of campus (Lot A and L). There will be times where these lots fill up as well, but you are much more likely to find spots in those lots than others, plus parking is cheaper there. This will increase your walking distance to class, so this is not recommended for students who have injuries, disabilities, or other challenges to mobility.

Carpooling is a great way to get you, and your classmates to school. Not only is it better for the environment, but it also opens spots that would otherwise be filled by your classmates. If everyone is going to the same place at the same time, it makes more sense to go together.

If you are in a position where you can get to school conveniently by bus, it is an option to consider. Taking the bus is more affordable than car ownership, and you’ll never have to worry about parking. Public transit is not accessible for all VIU students, however, and sometimes services and schedules can be frustrating.

Nanaimo is a city that lends itself well to cycling. There are a lot of well maintained cycling routes around town, especially by the university. If you own a bicycle and are within biking distance to the university, it is an option to consider. Nanaimo is a city of hills, but after you get into the habit of cycling, the slopes are manageable. The most significant drawback to cycling is the rain, and the winter months bring a lot of wet weather, so if you choose to cycle, make sure you have the right gear.

Your voice is valuable, and feedback from the students is one of the most important factors in making a change. If you have ideas about solutions to the parking issue, make sure your voice is heard. Talk to the VIUSU, send emails to the administration, or write to us here at the Navigator.