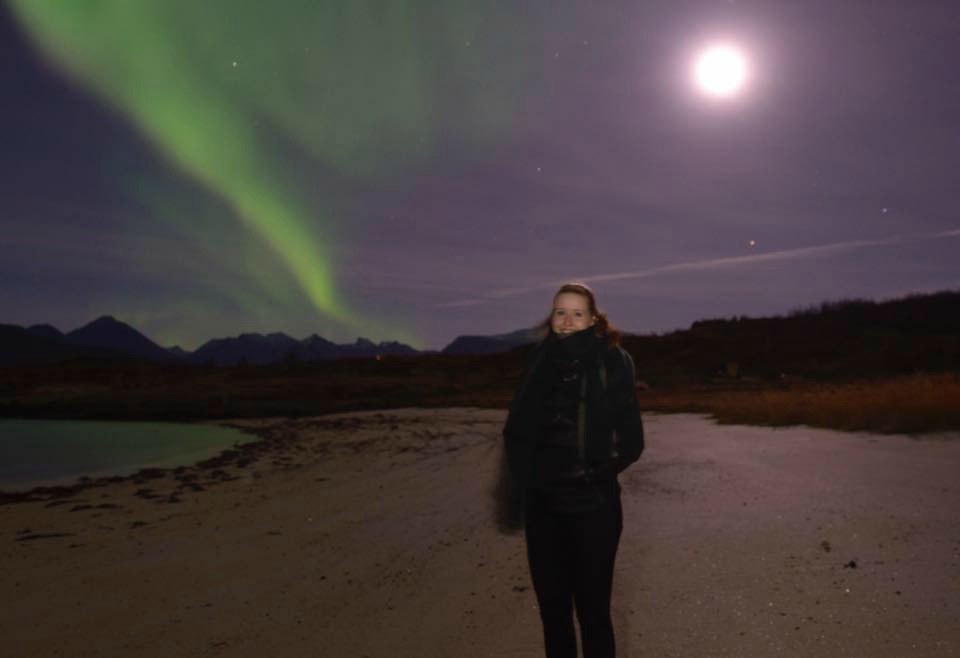 Tromsø is an island town nestled in the Arctic of Norway. When I arrived in early August of 2016, the sun only set for two hours each day. As the plane descended through the clouds, all I could see was rain and the tiny lights of the town below. I immediately wondered what I was getting myself into. For months, I had been explaining to friends and family why I had chosen to study in Arctic Norway for a semester. I didn’t really have a solid answer beyond wanting to see the northern lights. At the time, I didn’t know I was making one of the best decisions of my life.

My story begins when I was 16. I had spent seven months studying in Germany, and fallen in love with traveling, living, and learning in another culture. I always knew I wanted to go abroad again, and my chance appeared during my third year at VIU. I discovered the Education Abroad program and immediately began daydreaming about studying at all the partner universities. Ultimately, I decided Scandinavia was my dream study location, and eventually I chose the University of Tromsø as my partner school. I was lured by the photos of the northern lights, the quaint university town, and the appeal of dogsledding and skiing to class (which was a lot of stereotyping on my part). When I was accepted by the university, my life became a whirlwind of activity. If I wasn’t filling out paperwork, I was scrolling through the Tromsø hashtag on Instagram until I fell asleep, dreaming about knit sweaters and snow. The trip ended up being more beautiful and life-changing than I could ever have dreamt of.

For a semester, I lived in a house with five other students from all over the world. Our kitchen was always a flurry of activity. If someone wasn’t baking an elaborate meal from their home country, they were brewing beer in large buckets on the counter. Meals were spent chatting about life back home and how things were different in Norway. For many of us, the constant sunlight made it hard to sleep (even with our blackout curtains) and it wasn’t unusual to find someone reading or hanging out in the kitchen at all hours of the night. Weekends were spent exploring nature and hiking in the mountains—someone once told me the best place to meet a Norwegian was on a mountain.

One of my fondest memories was staying in a cabin in the middle of the Lyngen Alps. My friends and I took a ferry over the Lyngen Fjord to a small community that was picturesque as Norway could be. We walked for five hours in the pouring rain until we reached the small cabin, in the middle of a forest. There was no electricity, no running water, and the toilet was a glorified hole in the ground. It was close to the banks of the Fjord, and we had our morning coffee sitting on the rocks. It was quintessentially what I had imagined a weekend in Norway would be.

The most magical moment of my trip was seeing the northern lights for the first time. All the international students wanted to see them, as it was a huge selling point for us to end up in the middle of Arctic Norway. The day before my birthday, I had been convinced to go to a party some Norwegians were hosting in their dorm. It was fun to talk to people from Norway, since it was easy to get cooped up with other English speakers. The night was amazing and only got better when someone shouted, “look outside! The northern lights are out tonight!” We all ran out into the freezing September air and looked up to see vibrant green bands dancing in the sky. The lights took my breath away. Music played in the background and we all put our arms around one another. It felt like I was in a scene from a Scandinavian movie.

On my plane ride back to Canada, I felt as if I had come full circle. I had learned some Norwegian, met people who will now be lifelong friends, and saw one of the most beautiful countries in the world on an intimate level. I have a life in Norway, in the middle of nowhere on an island in the Arctic. That’s not something you get to say often.

Without being too cliché, my experience through Education Abroad changed my life for the better, and helped me become the person I am today. I would recommend Education Abroad to anyone with an interest in living, studying, and travelling abroad. There is so much to see in this world, and my experience is only a small part of it. I am incredibly lucky to have had this opportunity, and am currently applying to do my Master’s in Norway so I can make more memories there.

Now when people ask me why I decided to study abroad in Arctic Norway, I have a million reasons why it was the best decision of my life. Maybe you’ll end up somewhere in the world you would have never imagined; it’s up to you, you just have to open yourself to the adventure.

If I have swayed or inspired you, don’t hesitate to email <EducationAbroad@viu.ca> for more information on where in the world you can end up.