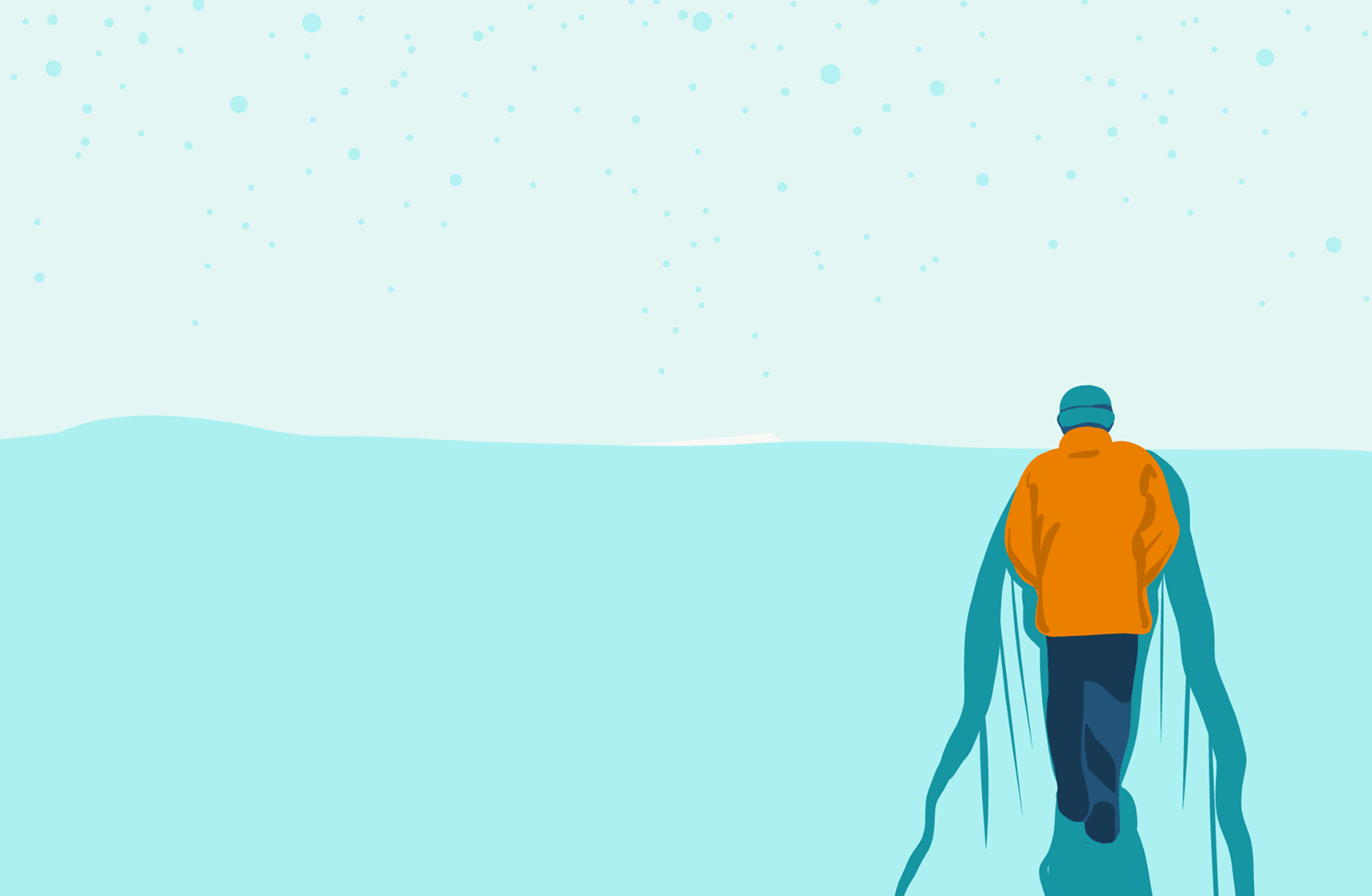 Weekday winter mornings were frantic in my household as a fourth-grader. There was only one shower between me and my four siblings, and we all needed to be properly dressed before walking to school in the cold. Naturally, we fought over the best winter clothing. Our ages varied from five to sixteen, so we each had our own jackets, ski pants, and boots fit for our respective sizes. For everything else, however, the policy was first come, first served. There were two plastic containers on the top shelf in the hallway closet: one stuffed with toques and facemasks, the other with mittens and gloves—wake up earliest and you get your pick. Of course, being kids, the process was never quite that simple. Because of their superior age and strength, my older brother and sister tended to get the gear they wanted, which left me and my two younger brothers to scrap for the leftovers.

The ten-minute walk to M.J. Coldwell, the elementary school in Regina, Saskatchewan that my younger brothers and I attended, was torturous. On the days when the wind whipped against our small bodies, frequent on the prairies, we walked backward to avoid the facial assault. Snowdrifts could reach the roofs of one-storey homes. No matter how well we seemed to dress, the cold infiltrated our bodies, leaving us shuddering. Being young, we assumed such brutal winters were universal across Canada.

From the late ’80s to the mid-2000s, growing up in Saskatchewan typically meant moving to Alberta or British Columbia after completing high school. Saskatchewan, at the time, was still a “have not” province with underdeveloped resources and a struggling economy. The province’s two largest cities, Saskatoon and Regina, both had populations under 250,000. Better job opportunities, combined with the big city allure of Vancouver, Calgary, and Edmonton, were usually more than enough to persuade a recently-graduated 18-year-old to switch provinces. My older brother Dylan was no different. He moved to Vancouver in his early twenties to attend Simon Fraser University. After his first Vancouver winter, Dylan bragged about the mild weather.

“The temperature is almost always above plus five, and there’s rarely any snow,” he said.

BC’s superior winter weather became a frequent topic for me as a teenager in Saskatchewan. From friends and family who moved to the province and stated with certainty that they’d never return to Saskatchewan because of the cold, to the snowless shots of downtown Vancouver on CBC in December, I learned that BC was the place to be during a Canadian winter.

In 2006, when I was fifteen, my family and I travelled to a resort in Jamaica for a Christmas holiday. Fellow Canadian vacationers regularly asked us where we were from. We’d say, “Regina”, and it wasn’t uncommon to hear back, “Oh. I feel sorry for you. It’s so cold there, isn’t it? We’re from BC.” I’m not sure if my family coined the term “BC weather snob”, but I do remember it being used in our home.

In September of 2013, in the midst of a booming Saskatchewan economy, I moved to Nanaimo, on Vancouver Island. While I wasn’t following my brother’s more traditional footsteps (I moved to attend a treatment centre for addiction), I looked forward to the warm winters I’d heard so much about.

My expectations were greatly exceeded. While it snowed for several days (then quickly melted) during my first Nanaimo winter, the weather was nothing compared to what Regina offered. Once I completed treatment, I spent much of my winter hiking Vancouver Island’s incredible rainforests. A good rain jacket and a pair of hiking boots were all I needed—toques, ski pants, and gloves were unnecessary.

I was experiencing an illustrious BC winter, and it was time to tell the world. I bragged to my friends back home. I bragged to my family. I even posted screenshots of Nanaimo’s balmy weather forecasts on Facebook. Through the 12-step group I attended, I made friends who had lived in Nanaimo since birth. Finally having the street cred to join their hallowed ranks as weather snobs, I regurgitated the script I had heard most of my life: I told them how much worse Saskatchewan’s winters were and how great it was to live where we lived.

To my bewilderment, my friends warned me that I shouldn’t underestimate BC’s “wet cold”. They told me, defensively, that because of the province’s higher humidity, a −5C “wet cold” in BC is comparable, and, in some cases, worse than a −30C “dry cold” in Saskatchewan. I balked. I knew, from experience and common sense, that −30C in Regina is much worse than −5C in Nanaimo. My friends’ sentiment, I soon learned, was a widespread belief in my new home province. British Columbia, home to the warmest/coldest winters in Canada?

In hot weather, humidity’s effect is obvious: you sweat more. Perspiration, or sweating, is your body’s natural method of cooling itself. When you become too hot, your pores secrete sweat. Due to your excess body heat, the sweat on your skin evaporates. When evaporation occurs, the sweat on your skin cools from the loss of heat needed to turn a liquid (your sweat) to vapor. Another example of evaporation’s cooling effect is the chill you experience when exiting a hot, steamy shower.

Obviously, sweating is not a problem in cold weather. Though, as explained in a Globe and Mail article titled “Is damp cold really the worst?”, damp air transfers heat more quickly than dry air,  “allowing more heat to escape from your body [which makes] you feel colder.” But, as the article explains, there’s major clog in the wet cold theory: According to Dr. Ollie Jay, a thermal physiologist at the University of Sydney, cold air holds much less humidity than warm air, “meaning differences in relative humidity (and thus also in heat conduction) are trivial”.

Dave Phillips, a climatologist with Environment Canada, takes it a step further in a CBC article titled “Wet cold? Dry cold? Expert says there’s no such thing”, by saying there is almost no humidity in very low temperatures to begin with.

Simply put, −10C in Regina is the same as −10C in Nanaimo, and you can replace Regina and Nanaimo with any city. However, as you might imagine, the difference in winter temperature is drastic between Regina and Nanaimo. From December to March, Nanaimo’s average low is −0.5C. Regina’s average low over the same period is −16.2C. The coldest temperature ever recorded in Nanaimo is −20C (only a 3.7C degree difference from Regina’s average low in the winter). The coldest temperature ever recorded in Regina, without factoring wind chill, is −50C.

Coldness, of course, is relative. A windy, rainy, −2C January day in Nanaimo is a sweeping contrast from the city’s dry, stifling summers. Furthermore, in the same way my younger brothers and I didn’t know anything different while trudging our way to school, people born and raised in Nanaimo, like my partner Sarah, wouldn’t know anything different on their winter treks either.

After initially rejecting my take on the wet-cold debate (but then eventually accepting my facts and reasoning), Sarah explained that Nanaimo citizens spend much more time outside during the winter than Regina citizens, thus prolonged exposure to a moderate cold could create the illusion of a more severe cold. Prairie provinces, like Saskatchewan, also receive more sunlight than British Columbia during the winter. Nanaimo, for example, receives only 82.3 mean monthly sunshine hours from December to March versus Regina’s 117.4. It’s also important to note that it’s a massive overstatement to say the entirety of BC, a province that shares borders with Yukon, Northwest Territories, and Alaska, has warm winters.

When I consider my irritation to the claim that Nanaimo’s winters are comparable to Regina’s, I think about when I tell people where I’m from and how I often still receive a response to the effect of, “That’s too bad.” I know these exchanges are, for the most part, friendly Canadian banter, and I also get how arguing about whose cold is colder can appear trivial. For me, the underestimation of Saskatchewan winters hits a nerve of cultural pride. In Saskatchewan, despite our low population, our oft-struggling economy, and our weariness over being the butt of jokes from other provinces, surviving our unforgiving winters is a uniting thread in our communities.

Yet, taking pride in survival is not exclusive to Saskatchewan or the prairie provinces. In fact, survival is at the core of Canadian identity—it’s the overarching theme in our literature, it’s one of the defining factors that separates us from our southern neighbors, and it’s the tools we collectively use on a daily basis to withstand today and make it to tomorrow. Even though the idea of a wet-cold is more myth than reality, on closer investigation, it’s not surprising that my fellow Nanaimo citizens would become defensive when I call their winters mild. As a Saskatchewan-born kid who walked fifteen miles to school, barefoot and uphill with snow up to my chin, I can get defensive too.