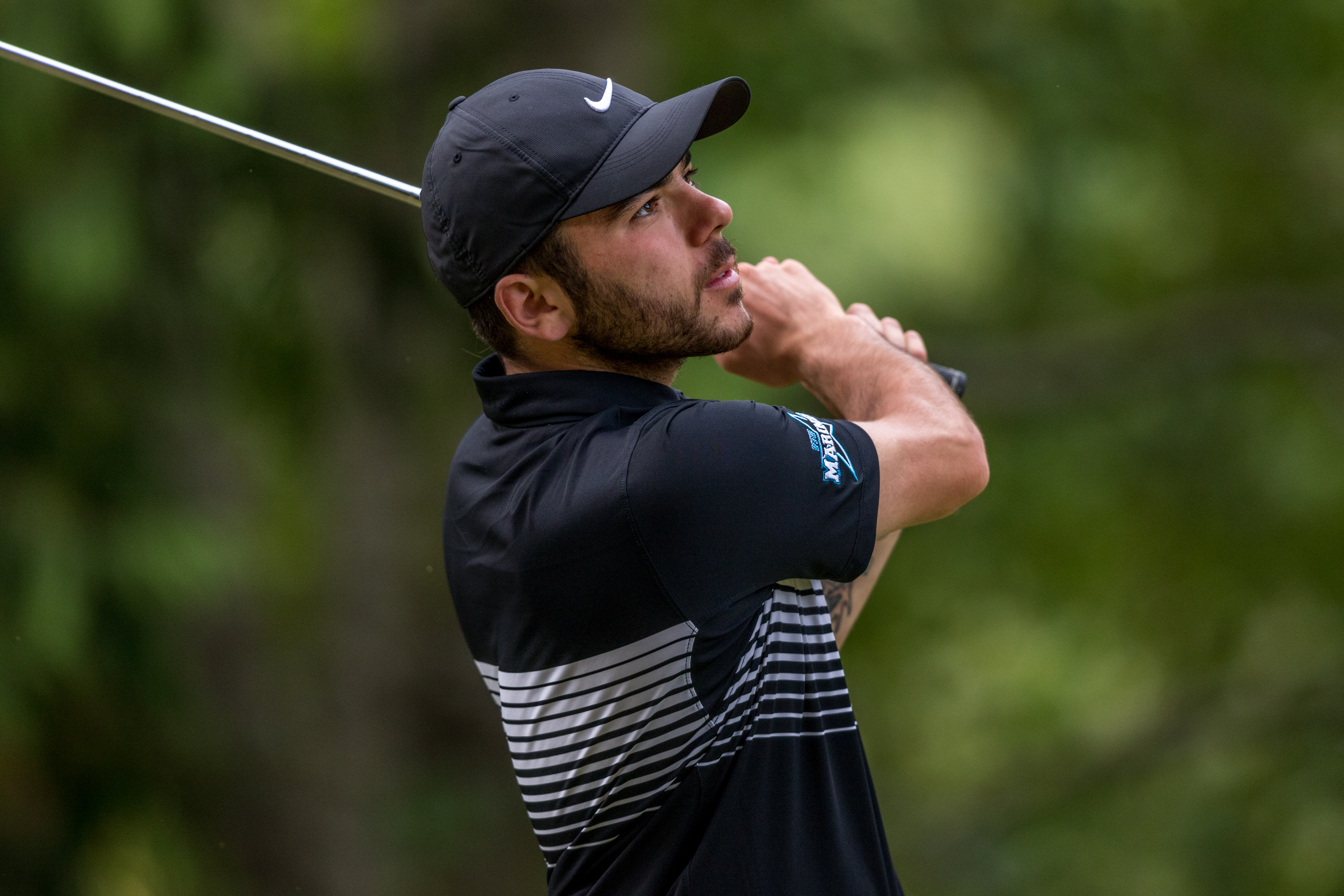 Tony Trozzo just wrapped up his sophomore season playing for the Mariners golf team. The 20-year-old Qualicum beach native already has some impressive accomplishments under his belt including qualifying and competing in the Canadian Men’s Amateur Golf Championship in August. He spent a few minutes with the Navigator chatting about his love for the Calgary Flames, his golf career, and a clever trick that might just save him from spending money on gas commuting to and from campus.

Tell me about your background, experience, and how you got into golf?

My experience with golf starts as a ten-year-old looking for something to do in my free time. I watched this sport on TV and really thought it looked like a lot of fun. I loved this game from the very first time I put a club in my hand. So many summer days as a young teenager were spent on the golf course, and I don’t regret any of it.

Let’s talk about the season. What do you see as some of the main accomplishments for yourself and the team?

The season was here and gone in a blink of an eye. It started from an early season surprise of our number one player leaving the team, and making the rest of the team have to step up, week in and week out, to try and compete in the PACWEST. We were a very young team this year, filled with sophomores and freshmen, who all just wanted to make a difference. We grew as a team from the first tournament in Kelowna to the last in Abbotsford. We missed out on the provincial bronze by two strokes in a heartbreaking fashion. I know we are all ready to step up and hopefully make the next step to becoming a contending team next season.

Individually, I think I made strides in a positive direction, I dropped my scoring average by three from my freshman season, and hit over 90 percent of fairways over the season which was a new Mariner record. I’m looking forward to continuing the stride this offseason, and hopefully jump to new heights next season.

What’s it mean to you to represent VIU?

I absolutely love being a Mariner. It’s the greatest feeling in the world knowing that young kids can come up to you and say they thrive to be like you and look up to you. It’s an honor to wear the Mariners logo on the shirt.

This was a tough one for me—the ’90s were filled with some great tunes. But, if I had to pick one, it would be “Jump Around” by House of Pain.

If you could be any animal in the world, what animal would you be and why?

The animal of my choice would be a penguin, without a doubt. Their personality matches mine, underestimated by others, loud, and modest. They also love to slide around, and I think that would be the coolest thing.

What was the last gift you gave someone?

The last gift I gave someone was a mug that I got in Vancouver. It was for my girlfriend. I know she loves tea, and I think she loves it.

Oh boy, high school…what a time. I personally think that I truly haven’t changed that much since then. I’m very outgoing, loud, and stand for what I believe in. I remember my first few years of high school, I was very quiet, and scared to talk to girls, that quickly changed when I met my high school sweetheart. I played soccer and golf probably more than my teachers would like, and made some friends that I think will be with me for life.

What do you think about when you’re alone in your car?

I actually have to drive to school every day from Qualicum Beach, which is a 45-minute drive. I often think about what assignments I may have already forgotten about, and why people are looking at me so awkwardly when I’m singing by myself. It’s a long drive, but it gives me time to unwind and reflect on the world.

What’s the last thing you watched on TV and why did you choose to watch it?

The last thing I watched on TV was the Flames taking out the Red Wings on a Thursday night. I’m probably the biggest Flames fan west of the Rocky Mountains, and everyone in my program loves to give me heat about that.

What is the funniest thing that has happened to you recently?

Funniest thing would probably be the other day. I was driving to school in absolutely pouring rain. I was going down the 90 zone at a modest 85. A guy behind me was clearly in rush and not caring about the weather. He rode my bumper the whole way, even though he could’ve passed me in the other lane. After about five minutes, he floored it by me, and flipped me the bird. About 10 kilometers ahead, there he is, getting a speeding ticket. Karma sucks man, and if you’re reading this, I hope that ticket was worth it.

You’ve been given an elephant. You can’t give it away or sell it. What would you do with the elephant?

I love animals and would probably make him my own pet. I’m not quite sure how long these guys can walk, but perhaps ride him to school to save me some gas money.

Who would win a fight between Spiderman and Batman?

Spiderman. Hands down. What can’t he do? Those webs would tie up Batman, and he wouldn’t even know what hit him.

If you could eat only three foods for the rest of your life, what would they be?

I tend to thrive off the same foods, but if I could only pick three, it would be: peanut butter because it’s just the world’s eighth wonder; Smoothies (don’t know if this counts because of the countless ingredients that are in there, but I love my smoothies); And finally, potatoes, because what can’t you make with a potato?

Getting deep into my brain. My biggest inspiration is knowing how many people have told me I can’t do it, or how many people made fun of me for my size when I was younger. I love proving people wrong. I absolutely love it. Playing varsity sports after all of the concussion problems I’ve had over the years, and continuing to push through all of my hardships. If I was going to pick my biggest human inspiration, it would be Jarome Iginla—[he’s the] hardest working athlete I have ever seen play. He battled through almost everything, and I envy his personality.

We finish the interview and you step outside the office and find a lottery ticket that ends up winning $10 million. What would you do?

If I truly found that, I would find who’s it was because I know if I lost that ticket, it would be absolutely heartbreaking. If they offered me a reward, I would put it all towards mental health and CTE research. These things mean the most to me, and we need to find a cure.