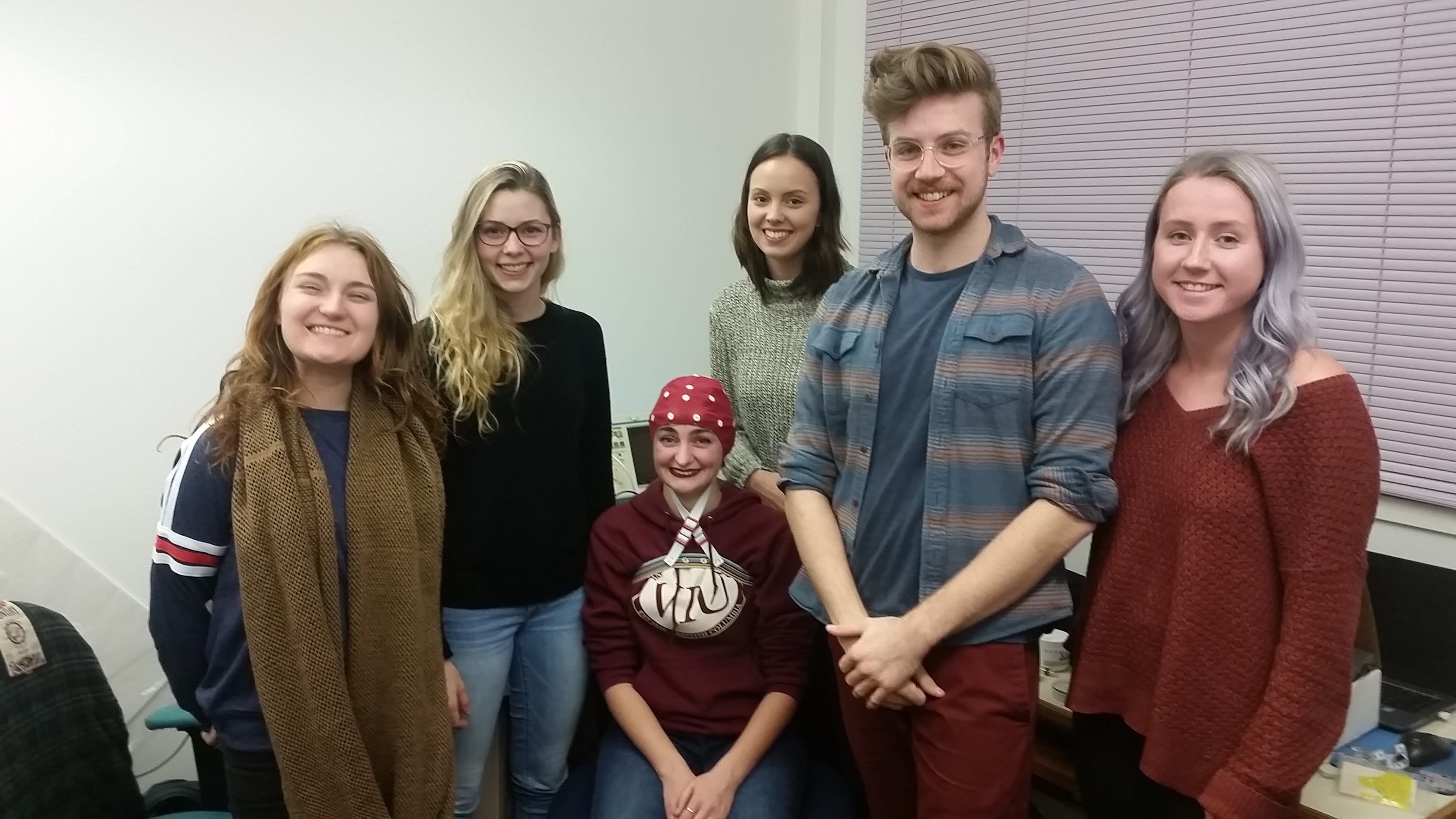 In bldg. 356 on the VIU Nanaimo campus, there is a small lab where students use neuroscience to better understand human behaviour.

Michael Willden is a senior psychology student in the process of completing an honours project with the Sleep and Biological Rhythms Lab. Under the supervision of Dr. Elliott Marchant, Willden is researching how having a baby affects a mother’s sleep architecture. Willden is using a portable electroencephalogram, or EEG unit, which measures the electrical activity of the brain and correlates the activity with brain states. For example, with an EEG, one can tell if an individual is awake, sleeping, or dreaming. Willden records these changes in the sleeping brains of mothers in hopes he might be able to explain why they experience a dramatic decrease in sleep quality after childbirth, independent of the disruption due to nightly feedings.

How did Willden come to be strapping wires to sleeping people’s heads? According to him, he was inspired early in his VIU career to pursue psychology and neuroscience. He had Dr. Marchant in a first-year class and was immediately drawn to the subject matter, as well as Dr. Marchant’s teaching style, motivation, and approachability. He contacted Dr. Marchant about volunteering in his lab, a suggestion which was enthusiastically embraced. Between the practical lab experience and his courses in the psychology department, Willden gained the skills to now embark on his own research, under the watchful eye of his supervisor.

“I love science,” Willden says. “It’s a life achieving goal to give back to the scientific community. I feel like I am a part of something bigger than myself [when] contributing to knowledge.”

It is well accepted that having a baby alters a mom’s sleep schedule. For better or worse, they sleep less and more intermittently. This makes sense, because new babies require care, most notably feeding every three hours or so. But how does a new mother adapt so quickly to her child’s demands? Even mothers who traditionally were very good sleepers switch to being light sleepers after the birth of their child.

Our brains are divided into two halves, or hemispheres, that are connected by a structure called the corpus callosum. Under regular circumstances, both hemispheres show relatively the same level of activity: they’re awake at the same time, or they’re both asleep. Willden and Dr. Marchant believe that something happens during childbirth that changes the brains of new mothers from sleeping with both hemispheres at the same time, to a unihemispheric (one at a time) pattern. Researchers who have monitored these patterns in other mammals and birds have noted that not all species sleep with both hemispheres, as humans usually do. For instance, seals will sleep on their sides with one hemisphere of their brain technically sleeping while the other side stays awake. This allows for increased vigilance during rest. Recently, researchers with Brown University and the Georgia Institute of Technology found that humans sleep unihemispherically during the ‘first night effect’ (a phenomenon describing when a person is sleeping in a new place). Similar to new mothers, people sleeping in a new place report that they don’t sleep as deeply, wake up more often, and feel less refreshed. It may be that new mothers exhibit these same changes as individuals sleeping in new locations; i.e. they could be sleeping with one hemisphere at a time. At least, that is the hypothesis Willden is investigating.

In order to test his hypothesis, Willden will be recording electrical brain patterns from women who have had children and comparing them to women who have never had children. In addition to the EEG data, he will also collect actigraph data (like a Fitbit for researchers). This will monitor things like heart rate and muscle twitches. Used together, the actigraph and EEG data will allow Willden to reconstruct what’s going on in the brains of mothers.

If you happen to be a new mother and would like to be part of this research, there is an opportunity to join the study. You need to have given birth in the last five years, be finished breastfeeding, not be taking any medicine for sleep disorders, and be in generally good health.  If this sounds like something you would like to help out with, Willden encourages you to contact him.