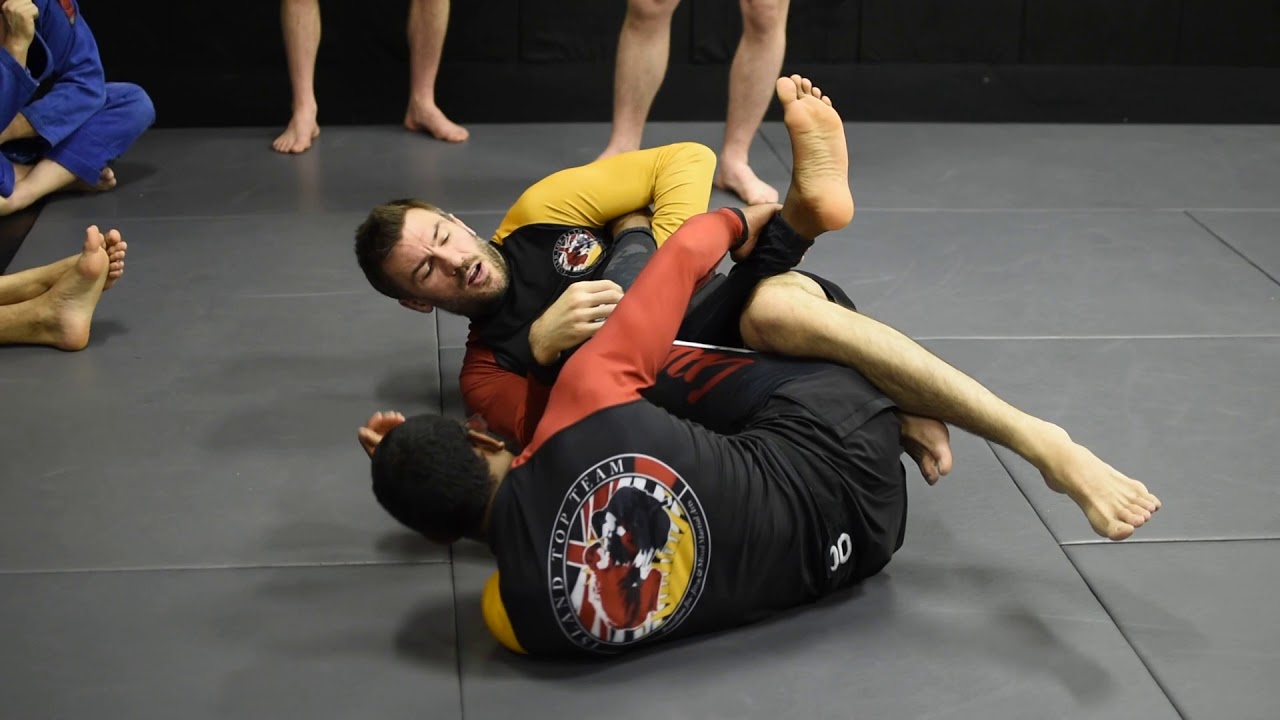 On the regional MMA scene of Vancouver Island, Rob Biernacki is a highly regarded and sought after Brazilian jiu-jitsu (BJJ) instructor. He has been training for years and earned his black belt through former mixed martial artist Charles McCarthy. Biernacki’s life experiences have shaped him into a very cerebral, methodical competitor, and person.

He has also put himself in a good position with the new dedicated facility replacing the teams prior residence at Nanaimo Athletic Club, and a successful and experienced team. I grabbed a few minutes to talk about how he got his start in Jiu-jitsu, his current team, and what a novice can expect when looking to learn the sport.

Can you talk about your background, and how you got involved with the sport of Brazilian jiu-jitsu?

I was interested in learning how to defend myself at a young age, studied most of the various martial arts to some degree, but found them lacking. I found the combination of effectiveness, safe training, and unique mental challenge of BJJ to be the most satisfying. I received my black at American Top Team in Florida, and have travelled all over to train with the best coaches in the world so I could bring the cutting edge of the art back here to Nanaimo.

The gym relocated to a new facility. How has the move impacted the team?

It’s been hugely impactful, we’ve grown more in the four months since we opened the new academy than we did in the first year we established Island Top Team (ITT). Several students have remarked that the surroundings finally match the quality of the training we offer. The growth is enabling me to expand our schedule and create more opportunities for my assistant coaches, while providing class times that allow more people with varied schedules to attend. And on a more personal note, it finally feels like we have a home of our own.

What are some of the advantages of doing BJJ both competitively and recreationally?

The obvious ones are fitness and self-defense, but I believe the greatest advantage is self-development. Rising to the mental challenge of setting and achieving goals, becoming accustomed to overcoming difficulty, setbacks, and discomfort turns you into the sort of person that can translate the problem solving aspect of BJJ into other aspects of life.

What would you say to someone who was thinking about joining your gym?

I would tell them that they would not find an instructor more dedicated to their improvement and achievement than me. If they get a chance to speak to my students, they will get an idea of how much time and effort I put into creating the best training experience possible. They will be joining a program where everything is designed to give them the greatest chance of success; all they have to do is show up and do the work.

I would also encourage them to do their homework so they can truly appreciate the nature of the opportunity. Many people who take up a martial art simply find the closest location to them and then stay there due to inertia. If someone really does their research they will find that the level of instruction we offer is so far ahead of anything else that is available locally; that it’s difficult to accurately describe the difference politely. We have people that travel thousands of miles just to train with us. Our instructional material is some of the most popular and highly regarded out there, and is used by thousands of people all around the world. We are literally a world-class BJJ academy.

What do you wish more people knew about BJJ?

How rewarding it can be. There are plenty of challenging activities out there, and there are plenty of fun activities out there, but precious few hit the sweet spot in the middle of the venn diagram of the two. The depth of the stimulation of BJJ is practically infinite. It is also the perfect antidote to the modern malaise of instant gratification. There is no way to get good at it quickly; you have to put your time in. Luckily, if you train with us you will improve far quicker than if you train elsewhere, so if you can’t fully let go of the desire for instant gratification, we can still help you.

What would a class look like for a beginner?

First we will take you through a private intro session that will cover the concepts, terms, and basic movements that are essential for establishing a good understanding of how to train and progress safely and efficiently. You’d be amazed how many people come here from other clubs with years of experience and can’t execute some of the fundamentals of our sport as well as our white belts. Then you will participate in a class with other beginners that will include some of our higher ranked students as well. We have a saying here “we all get better together;” part of training at ITT is recognizing that we are all only as good as the people around us, so we have to raise them up to be the best they can be. The fundamentals class will include drilling and positional sparring. If you’ve never done a combat sport before, you will be shocked by how good a workout it is.

How do you feel about BJJ for: the dojo, the street, and for competition?

I believe that BJJ is a set of physical principles that can be applied to any of those contexts. The difference between the applications lies in the intensity and the consequences. I will say this about the false dichotomy that often gets presented by so called self-defense schools who dismiss competition: the most important aspect of self-defense is the ability to perform under pressure against a fully resisting opponent in an adrenalized state, and nothing prepares you for that like combat sports competition. Anyone who claims they are training for self-defense and doesn’t compete is lying to himself or herself. Self-defense schools usually don’t want their students to compete because they don’t want them to be exposed to how substandard their training is. Having said that, I also believe that self-defense is the least important reason to do BJJ. We live in the safest society in the history of the planet; do it because it’s the most amazing sport and hobby out there, and on the off chance you ever need to defend yourself, the skills will be there.

How effective do you believe jiu-jitsu is for self-protection?

I would say it’s not a matter of belief, but an established fact that jiu-jitsu is the most effective individual martial art for self-protection. There are others that work well for many people, but only through jiu-jitsu can a smaller, weaker individual hope to reliably survive and/or prevail in a violent encounter.

The team has seen a tremendous amount of success winning medals at various tournaments both domestic and international. Can you pick a particular moment or event that stood out as the most satisfying?

It’s tough to pick just one. Certainly Shane Malone defeating a black belt after just two years of training, which validated my promise to my students that from day one I’m teaching them to beat black belts, is up there. And Jimmy Lapointe winning Pans, which was our first major international tournament win and came after four razor close matches, was hugely emotional for me. If I had to pick one, I would say that winning the Nogi team trophy at the Western Canadian Championships this year was particularly meaningful because it happened while I was going through the turmoil of building our new academy, and had been hospitalized a few days prior with severe abdominal pain due to the stress. That we were able to win the team standings despite being one of the smallest teams there (the second place team was made up of multiple academies and had three or four times as many competitors as we did) really validated everything I’ve been trying to achieve as an instructor.

Are you a big fan of competition fighting? Why or why not?

Yes, I am. Though I don’t believe it’s absolutely critical to legitimize one’s BJJ through competition, it is certainly the most accessible and obvious way. What sets BJJ apart from the many non-functional martial arts is the fact that it is pressure-tested, and if you want to be legitimately good at this stuff you have know that it works when the chips are down. So if your coach has never competed, and his or her students have not produced any significant results in competition, or are actively or even passively discouraged from competing, then you can pretty much bet on their BJJ being pretty substandard.

What is one thing that you’d like to emphasize to the beginning jiu-jitsu student?

Relax. We are not fighting each other. We are fighting injuries. For some reason people who would never dream of winning a match with even a recreational tennis player have convinced themselves that if they just go as hard as they possibly can they could win, or at least survive, against someone who makes a hobby or profession of controlling and potentially maiming a human opponent. The first thing you need to learn is how to control your own body, then you can learn how to control someone else’s body, and only then can you learn to submit another person. Recognize that if you break your toys you don’t get to play with them. Our number one rule is “keep yourself and your training partner safe,” it’s what enables us to keep improving at such a high rate. Also, set realistic goals and you will enjoy your training a lot more. No one is awesome right away, be prepared to focus more on small victories and you will develop much faster.

Where do you see yourself/your gym in the next five years?

This year I reached a huge milestone in my career when I had the privilege of being asked to be one of the coaches for someone in preparation for ADCC (the most prestigious tournament in our sport, basically the Olympics of grappling). In terms of coaching credentials that puts me in a pretty exclusive category, so I hope the next five years will see our instructional methodology continue to sprea