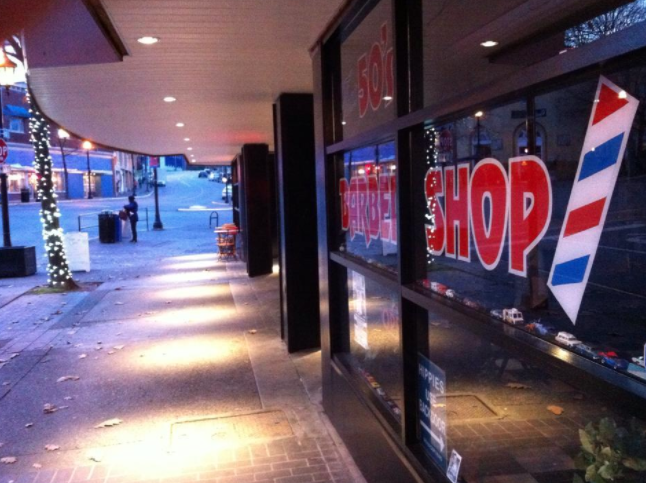 Down Victoria Crescent, between Mambo’s Pizza and The Queens, is a quaint chessboard-floored barbershop. Inside, the walls are decorated with retro advertisements varying from original PEZ ads to classic “There’s nothing like Guinness” posters, all punctuated by a variety of 50s pin-ups.

Johnny Rose is a thin man at 33, his face and body covered in tattoos, from the highly detailed to the likes of a weekly paper comic strip. He sports a classic greased-back hairdo combined with a surrealist moustache, as if Salvador Dali joined a street gang. He works away on a young man’s hair; the humming buzz of the shears mingling with Bobby Kimball’s croons of “Rosanna.”

Any resident of Nanaimo who frequents downtown has most likely seen Rose around Commercial Street. He can usually be seen crossing from his work at That 50’s Barber Shop to get a coffee at The Vault, or cruising around atop one of his many custom bicycles. Rose sticks out in a crowd, and for little over a year now, he has been giving some of the best haircuts in town.

“Johnny was originally a customer of mine,” Dave Lawrence, owner of That 50’s Barber Shop said. “He showed me a few pictures of haircuts he had done for friends, I liked what I saw, and got him to come in and cut my hair.” There was just one issue—he was too slow.

Haircuts take roughly 15–20 minutes at most shops; it’s a fast-paced business. Customers come in expecting a quality haircut in a reasonable amount of time—it isn’t meant to be a long process, unlike salons. Lawrence had been looking for a barber to help him out, so the shop could stay open longer and accommodate people who work late.

Rose returned to the barbershop after roughly three months.

“He came back and improved his time cutting hair,” Lawrence said. “He seemed like he would be a good fit, and I was right.”

Another key aspect of working as a barber is having people skills. Kevin Donaghy, a harm reduction worker, was new to Nanaimo. A friend recommended Rose as a barber.

“The conversation happened just so naturally. When you sit down in the barbershop chair with Johnny it’s like going to therapy,” said Donaghy. The two men became fast friends. Donaghy was later invited into Rose’s Crank Pedalers Bicycle Club.

Crank Pedalers is a bicycle gang Rose formed four summers ago. He and seven other members get together every Sunday and go for a ride around town.

“I was always into custom bicycles and Johnny was open and accommodating. It’s cool because the majority of us are sober, Johnny being one of them. When it gets too cold for biking we switch to just meeting for breakfast,” said Donaghy.

The group has even set up booths in the past at local events to showcase their custom bicycles.

“We set a spot up [during] the Bathtub [Race] weekends. Unfortunately, the newspaper misspelt our group name as the ‘Crack Peddler;’ made us sound like a bunch of drug dealers, when really our club’s the exact opposite,” chuckled Rose.

Rose has been sober for a year now; it was his New Year’s Resolution in 2016 after waking up the night after many hours of drinking.

“I thought to myself, ‘what am I doing?’ I would black out regularly and embarrass myself. So, I challenged myself to quit. I haven’t missed it at all. I’m happy with my black label Bud. Alcohol is a funny bitch,” said Rose.

Jay Bender is a part-time music promoter and close friend of Rose, as well as a member of Crank Pedalers.

“Johnny is a real honest guy, will give you the shirt off his back. Probably the most generous person I’ve met,” Bender said. “I first started seeing Johnny at a lot of music shows I’d put on. He stood out with his tattoos and Battle Axe Warriors jacket. I eventually started having conversations with him and found out we shared a lot in common when it came to music. I now go to him regularly for haircuts. He keeps me fresh,” said Bender.

Rose first became interested in cutting hair when he lived in Red Deer. “I couldn’t find someone who knew how to do an old-school pompadour, so I decided that I would learn how to do it. It’s been a long ten years getting here,” said Rose.

Rose grew up bouncing between his mother’s house, foster care, and his grandparents’ place. At sixteen, Rose joined the carnival under Conklin Shows, the largest travelling amusement company in North America at the time. He set up, maintained, and operated the rides.

“It was a great time. You’d start work at noon, work until midnight, and party until the wee hours of the morning every day,” Rose said.

Rose eventually became involved with heavy drugs and spent his time ‘carpet surfing’ (a term used by junkies, meaning they are fiending for a fix). He was heavily involved with drugs until one night he overdosed on the floor of his mother’s house.

“I remember hearing the paramedics ask my friends around me if they knew me, and they all said ‘no.’ I was just some random guy. That gave me some clarity. I quit once I got out of the hospital,” said Rose.

When Rose turned 26, his girlfriend at the time broke up with him on Christmas Eve. That night he decided he would get the first Greyhound out of Red Deer and head for the Coast.

“Part of what makes Jonny so relatable is that he’s, in a way, been through it all. He’s experienced a lot of trials and tribulations, so when you sit and talk with him in that barber’s chair, he gets you,” said Donaghy.

Rose decided to stick with being a barber after all his job jumping. His grandparents have heavily influenced him.

“My grandpa said to me, ‘Don’t work hard your whole life, work smart.’ Being a barber is challenging, but it isn’t strenuous, it won’t break your back, and I have a ton of fun doing it.”