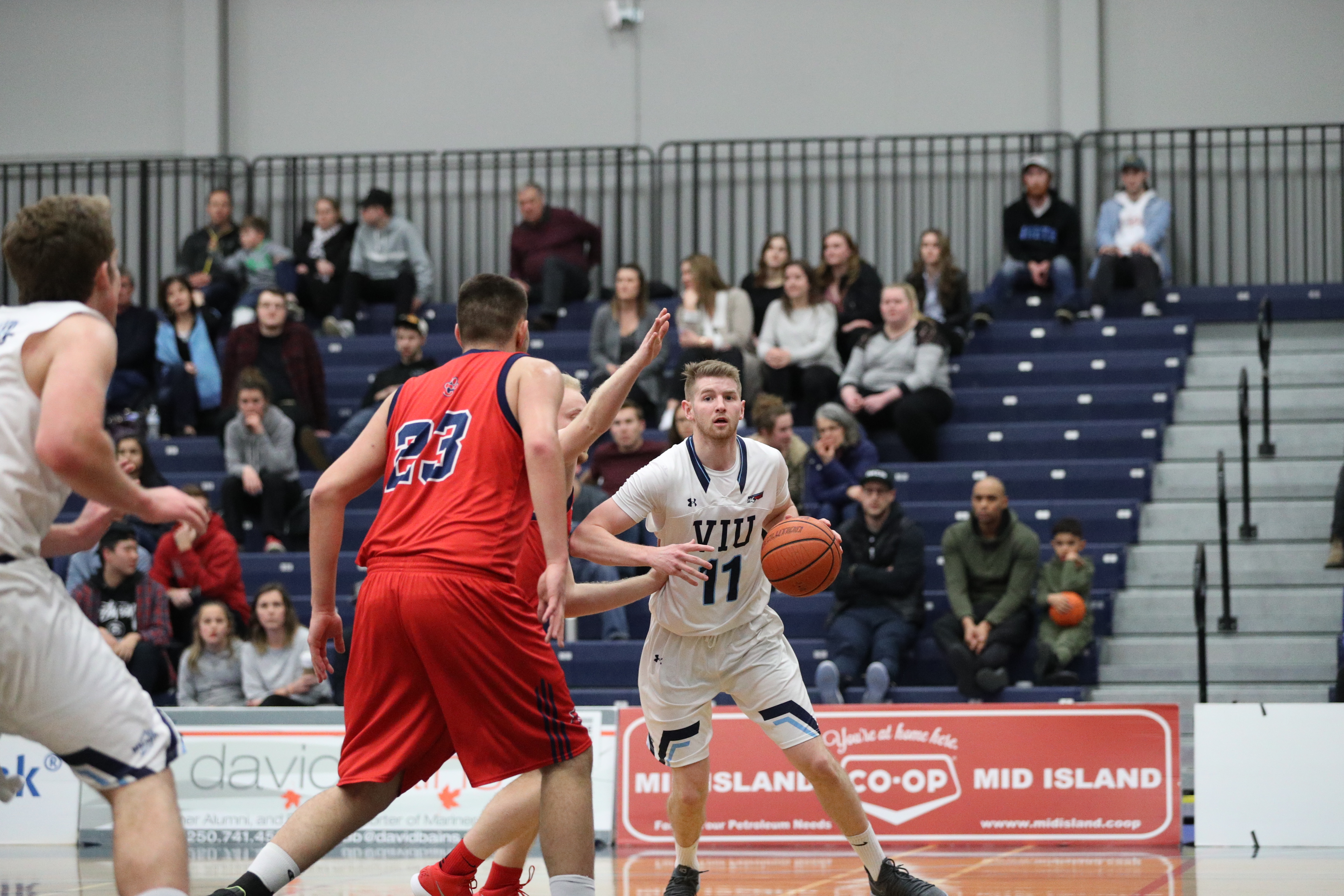 Playing in his final season at VIU, basketball guard Bryson Cox has a lot to be proud of. Throughout his five-year career his coaches and teammates have relied on his leadership, both on and off the court. He took time to chat with the Navigator about the team’s preparation for the upcoming provincials, and personal takeaways from such a remarkable university career.

What was it like to play in your last regular season home game at VIU?

I couldn’t of asked for anything more.  The five years here, and then having that final send off. Having the coaches showing their appreciation. Playing here was enough for me; it was a perfect way to end a final season.

Was getting injured during the third quarter of Friday’s game disappointing?

You can’t control that stuff; it’s a part of the game. Coming into Saturday was a bit of a bummer knowing I couldn’t play my ‘final home game,’ but just being able to watch my team, and still being a part of the environment, still contributing to the team, and seeing the new guys do well—it was enough for me.

Can you talk about some of your collegiate basketball milestones? What stands out?

It’s hard to pin point one exact moment or milestone. I would say that every year has gotten progressively better. Being able to make it to nationals three of the last four years is a huge milestone, and winning provincials the last few years has been great. But just meeting the guys, having that close bond with so many people, and that brotherhood where you know that someone has your back always, is probably the most important takeaway from my experience.

Where do you see the most growth or improvement in your game?

I would have to give a lot of the credit to Avneet, Matt, and the rest of the coaching staff.  My first year transitioning from high school to university-level basketball was challenging. Mentally I was there, but physically I was just small, slow, and generally not as good as I needed to be to succeed. They didn’t give up on me at all; they continued to push me to always be better.  Something that really helped me was my energy and defensive pressure.  Matt would preach that philosophy to me constantly; if I make an impact on the defensive end of the floor, the offensive end will come.

Do you consider yourself a mentor to the younger players on the team?

I like the idea of passing the torch down. I want to give them all the knowledge I have, let them understand the game the way I do. Hopefully some of the stuff I’ve found that has made the game easier for me, I can pass down to them.

If you could go back in time and offer advice to first-year Bryson, what advice would you offer?

Playing in games like the one against Quest where VIU carries a large lead must be interesting, how does the team, coach, and yourself continue to stay motivated and play with the same intensity throughout the whole game?

A huge thing for us this year is improving game by game. We practice hard, and we always are going into practice knowing we will get better. But for us on game nights, a huge emphasis has been—no matter the score, we can take away positives, or push out the bad habits. One of our guys, Usama, made a point a few weeks back: we may have a lead, but going into the second half, it’s a clean slate.

With provincials coming up, how has the team been preparing?

The energy and physical play tends to amp up during the provincials. Obviously you give it your all every game, but when you’re in an elimination format every team is out there performing to best of their abilities for the full duration of the game.

What do you feel is the thing the team most needs to work on in prep for the provincials, and what is the team’s greatest advantage going into it?

Something we need to work on as a team is playing a full 40 minutes. We have our moments, but consistency is always something we push for. In regards to our greatest advantage, I would probably say it’s that we stick together no matter what. It’s always next-play mentality with us.

Your brother Jordy joined the team this season. What has it been like to play alongside him?

It’s sweet. A lot of people don’t get to experience that in life. Playing with Jordan has been a surreal experience. Having that person you can talk to is great, but it does have its own set of unique challenges as well; the occasional argument, things like that. But we know to just leave it all on the court, and to not take any of that stuff home.

What about playing here at VIU, how would you describe what it’s like to wear the Mariner jersey for five years?

Amazing, really. The best part about it is at the end of your five years they don’t care about your record or your milestones. They want you to leave as a better person with an education, see you do good things in life, contribute, and give back to the community.