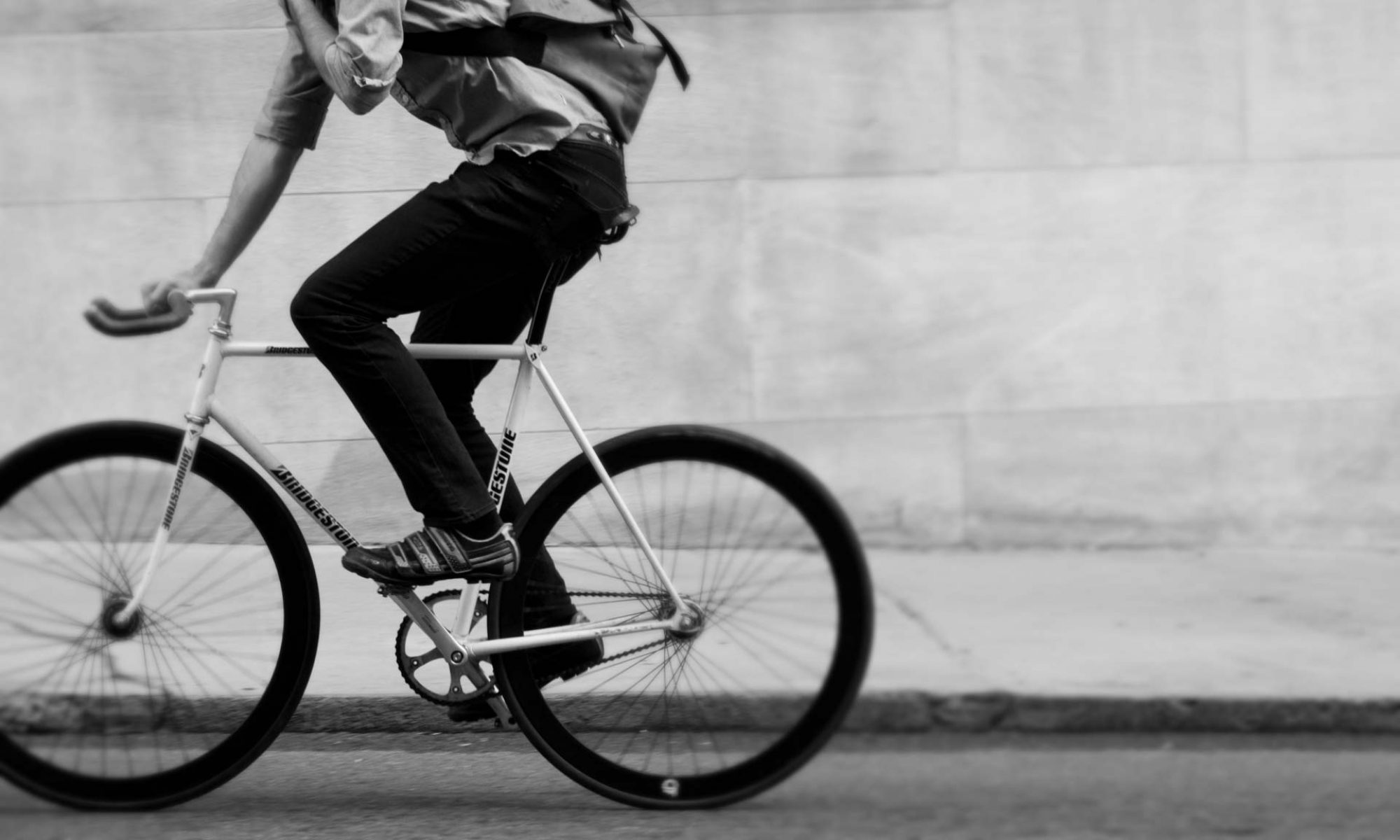 Robert Murray shouted as he sped along, while beside him Knuckles ripped through traffic with no apparent care for his life or well-being.

At a red light, Knuckles slowed into a track stand, balancing on his pedals while he rummaged through his messenger bag before pausing to shotgun the beer he removed. Then, before the light turned green, he was off through the intersection—triggering a symphony of horns from the angry afternoon commuters.

The streets blurred into a gradient of grays on the camera. Murray struggled to keep up while filming, but it was worth the shot.

An Albertan transplant to Vancouver, he had moved for film school and stayed to work as a bicycle courier while also directing his first documentary feature on bicycle courier culture. Knuckles, born Mark O’Malley, had originally come from Dublin to Prince Edward Island to visit family, before deciding he wanted to see the country. He’d then made his way across Canada as a squeegee kid.

Currently, Knuckles cruised the middle of the slow lane while Murray followed in the bicycle lane beside him, running camera. They both rode fixed-gear bicycles, as couriers often did. Murray’s was a vintage Campinelli, with Velocity Aileron wheels. Knuckles’ had a generic blue-framed bike assembled from spare parts. Nothing really matched. He’d had a newer Masi, but the previous week a vagrant had cut through his lock and stolen it, so the other couriers pitched in to hold him over while he tried to hunt down the bum. He was livid.

Turning off onto a side street, they picked up speed while Murray framed the shot. It was beautiful out, a perfect day for filming: overcast sky, his companion crisp and popping in the shot, looking like lightning in the flesh on the carbon fiber frame under the camera’s sped-up frame rate.

Cars whizzed by in the opposing lanes, but theirs remained clear. A brown Buick Regal sped past, followed by an old cherry red Mercedes SL class with the top down. Knuckles opened up, and the concrete towers blurred behind him, out of focus. His pale pink quads and hamstrings pumped frantically, stretching his cutoff black denim shorts to their limits; his thick blonde leg hair like a halo in the bouncing light. He looked like a heavy metal Jacques Anquetil. Murray was about to lose him, he couldn’t keep up much longer while shooting, so he panned right in the direction they were going.

Still panning, Murray slammed into the door of the cobalt blue BMW. He flew from his seat onto the fresh blacktop, landing flat on his back, pain cascading through his body; his camera launched from his hands in the direction of the car. He groaned. Knuckles sped off, unaware.

Anabolics in human form stepped out of the BMW driver’s seat and stood over Murray. “Bro, you should watch where you’re going.”

Murray lay in a daze.

“Stupid cyclist— can you hear me? Watch where you’re going! Idiot.”

The driver was tattooed to the gills, with a shaved head and thick corded muscle on a simian frame. He had pale blue eyes and a diastema.

“I should kick you to the curb, you pricks think you own the road.”

Murray didn’t know whether it was steroids that were making the driver so angry, but he tried to push himself to his feet. Pressing his palms on the ground he lifted his upper body, just in time to see the driver lean back. He raised one arm across his face.

“What is wrong with you?” he let out feebly, the breath just coming back to his lungs before the impending impact.

Blood sprayed from his would-be assailant’s mouth as he dropped to his knees, and from there on the cement.

Knuckles shot by, the U-Lock in his hand swinging through the air. He swung around and stopped his bike, locking his legs against the forward momentum, before leaning down to help Murray to his feet.

“What? Yeah, thanks,” a stunned Murray surveyed the scene.

“We should get outta here ’fore he wakes up?”

Murray scanned the street, but could find no sign of his camera. He began to pick up his bike, which had skidded under the open door of the BMW, when out of the corner of his eye he spotted it. It had miraculously, unbelievably, projected from his hands, across the driver’s chest, and onto the passenger seat.

He picked it up.

“I don’t believe it. Not even a scratch,” Murray sighed.

He picked up his camera and sped off after Knuckles.

“You alright boy?” Knuckles looked at him, his U-lock stuffed back behind his worn black leather belt.

“Yeah, yeah, thank you, you really saved me back there,” Murray paused for a moment, took a breath and said, “I’m just glad I didn’t break my camera.”

Contributor A creative writing major at VIU, much of Nicolas’ stories are inspired by his career in the film industry and his time playing in an indie band. In 2017 he was the recipient of the Bill Juby Award.