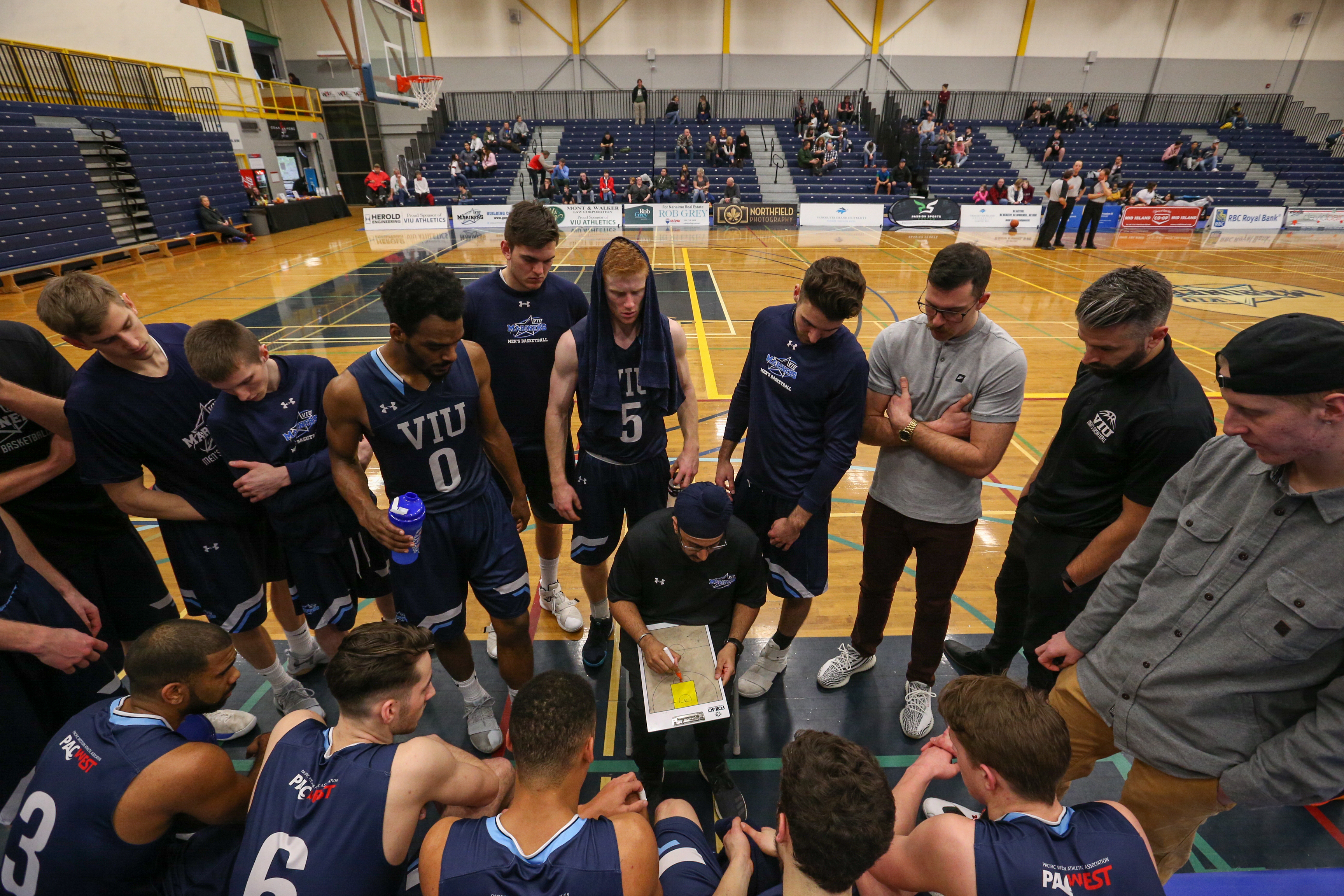 When VIU’s basketball team emerges from timeouts, the last person to speak to players isn’t always Head Coach Matt Kuzminski, but Avneet Brar, his assistant. As the huddle breaks up, Brar grabs as many players as he can and shows them a diagram of the court on a whiteboard, walking them through what is about to happen one more time.

Brar is hands-on before games, too. He sits and watches both teams warm up. He takes copious notes on his clipboard. He converses with boys and girls from the youth basketball program, Hub-City Hoops. It’s evident within a few minutes of being in his presence that Brar’s passion for the sport he coaches is unwavering.

The Nav caught up with Brar to discuss his basketball roots, the Mariners season, role models, and more.

When did you discover your passion for basketball? You’ve mentioned Coach Simpson is an integral part of both yours and Head Coach Matt Kuzminski’s careers. Can you speak on that as well?

I always liked basketball and loved hockey. My seventh grade teacher, Lisa Frey, would always open the gym to shoot and play games—I think that was a key turning point.

Coach Matt was my sixth grade basketball coach when I was a kid. Every time I see Coach Simpson, I am mindful and grateful of the opportunity he provided me; daily mentorship for years without asking anything in return. I am sure Coach Matt would echo the same thoughts. Matt played three years for Coach Simpson in high school, and they have been close ever since.

Did you play basketball at any level, and when did you make the transition to coaching?

I played basketball from the sixth to ninth grade. After my Grade 9 season, I made the transition to coaching/managing.

What about coaching basketball intrigued you, and why did you feel it would be something you might excel at?

I thought I could help people improve at a time when I wasn’t able to improve in some skill areas. It was also like a fresh start, a new game of sorts. People were still playing, and I almost felt I was getting a head start on coaching.

You coach and work with a multitude of age groups. Do you adapt your style or philosophies? Or do they stay the same, regardless of age or gender?

I don’t adapt my core values or philosophies. However, depending on age, I adapt how those values might be taught or demonstrated. The fundamental beliefs of my training are effort and attitude, so we speak about those quite often.

How would you describe the Island’s basketball culture? Have you seen a pique in interest amongst youth in regards to basketball programs? Or has the interest always been high?

The Island is known for producing gritty players. Interest has gone through highs and lows, however I do feel it is on the rise. The attendance at our games has been outstanding. The fan and community support is something we really appreciate and I’ve seen it grow in my six seasons coaching at VIU.

You recently had the opportunity to spend time in Ontario with the Canadian Women’s National Program; can you talk about that experience? What were some of the takeaways for you?

Spending time with the National Program was a tremendous learning experience. To be flown out across the country and be immersed in an atmosphere with some of the highest level coaches and high school athletes was a great experience. I really saw a high level of maturity and a great approach by the young student athletes who were participating. To be away from home, staying in a hotel and performing at that level—it takes a lot of mental and physical preparation, and the athletes were up to the challenge. The coaches were also so great in chatting about the game and explaining the “why” of each situation that occurred.

Can you speak a bit about the camps that you run? What are the challenges that come with organizing and running programs like this in the off-season? What would a day at camp look like for a participant?

The central focus of a camp is that athletes travel to a location for training. Often camps are held in Nanaimo. In terms of challenges, finding a day where a majority of the athletes can attend is tricky at times. A day of camp would traditionally be athletes coming to camp, and spending time on athletic movements and injury prevention with a strength coach. From there we would spend time working on dribbling, shooting, and game-like scenarios. We like to practice a skill, put it into a drill, and then compete out of it.

What are some of your goals for Brar Basketball?

I have many goals with Brar Basketball. A primary goal would be to provide a positive outlet for athletes to feel supported. If they can play at a post-secondary level, that is incredibly gratifying. If they go on to coach basketball instead of playing, that’s equally as gratifying. I really want to put forth the life changing experiences that I was fortunate enough to experience.

What a year we had. I really enjoyed this year and thought we had some tremendous growth. We faced a tough and veteran Douglas College squad in the final who went on to finish second in the country. Credit to their players and coaching staff; they did an excellent job.

How does the team operate in the off-season? Do players return home? Has the coaching staff begun scouting potential new recruits?

The players who return home are sent with a skills and weight lifting program. We hope to see them in the summer, unless they are quite far away from Nanaimo. I will see out-of-town athletes a few times during the summer. We have begun recruiting and finalizing some roster decisions. The team will lift weights as a team a minimum of three times a week, and scrimmage as a team three times a week all summer.

What are some of the goals for the Mariners basketball program during the off-season, and also looking ahead to next season?

As a team some of our main goals are to grow closer as a team, increase our community impact, and provide a positive outlet for the youth to embrace a healthy lifestyle through sport.

How has basketball affected your life? What is the most rewarding part of being a coach?

Basketball has changed my life for the better. The feeling of waking up every day with the power to make an impact for the better is incredibly motivating. I have a tie between most rewarding:

1) Seeing the athletes grow as players and people. There are a lot of dog days spent in the gym when it’s hot outside and the players could be at the lake. They get in the gym, work on a deficiency, and are patient enough to keep working until it shows up in games.

2) This one makes me feel like an old coach, but it would be seeing players have experiences for the first time. Whether it’s helping an athlete through being homesick, or seeing them win their first provincial championship. This feeling is something I won’t ever forget. The high fives and cheers with athletes through milestones is one of the most special parts of coaching.