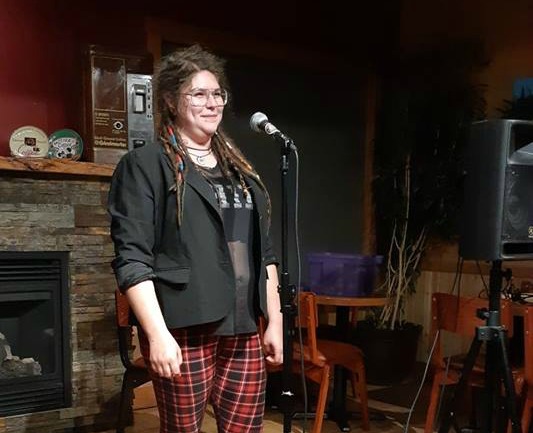 Nanaimo Spoken Word is an open mic poetry night at The Buzz Coffee House in Nanaimo, hosted by Jess Wilson, a creative writing student at Vancouver Island University. It’s held every third Thursday of the month and there is a $5 cover charge at the door.

All funds collected go toward paying The Buzz Coffee House rent for the space, funding writing workshops, and bringing in feature performers from Victoria and the mainland.

“I was really feeling like there wasn’t a place for arts in the community, specifically towards poetry,” Wilson says. “I would go out to open mic nights at the bars and stuff, and there was just no respect there because it’s all music driven.”

Wilson adds that while there’s a beautiful music scene in Nanaimo, there’s not a very strong community of spoken word artists or poets.

“I found I was always travelling to Victoria, like three or four times a month,” Wilson says. “I was thinking, instead of always going there, why don’t I just bring it here and start something?”

Nanaimo Spoken Word is open to all forms of poetry.

“That includes reading work from another artists that has inspired you.  I’m even open to monologues, dramatic story readings, comedic speeches; anything to do with promoting performance and the use of your voice,” Wilson says.