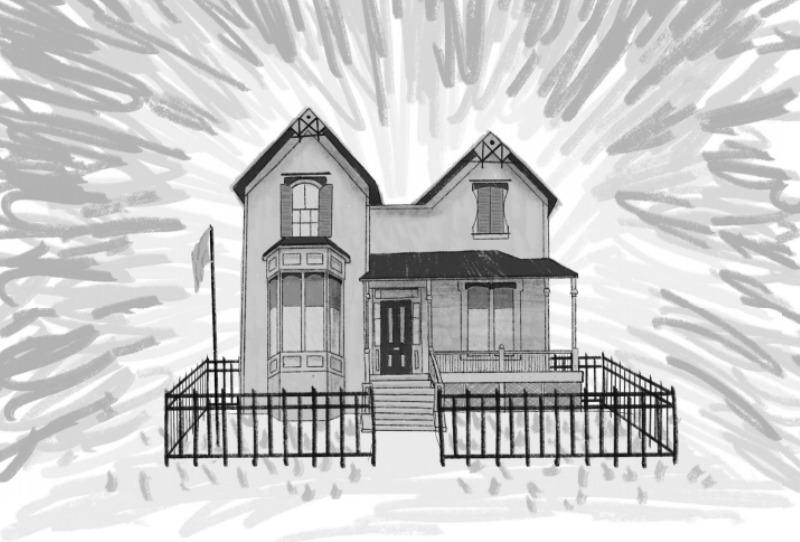 I jingled the keys to my Grandmother’s house as we walked up the driveway. The heritage house in Esquimalt sat neglected. There were more weeds than gravel. Some kids had impaled a pumpkin lantern on the wrought iron fence; rusted spikes pierced through the orange flesh. Once yellow and white, it was in bad need of repainting. In the moonlight, it looked blue and green, like mould.

“These, ladies and gentlemen, are the keys to party central,” I said.

“Are you sure it’s okay that we hang out here. Won’t your parents freak?” Jane said. She looked amazing in a red crushed-velvet riding hood. I’m sure Little Red never had legs like Jane.

“Look, my Uncle owns this place. Nanny left it to him when she died, and he hasn’t been back here in years. Mum only comes by once a month to check on the place, if that,” I said.

All week, Bud and I had been planning this chance to get the girls alone in our very own pad for the night.

Jane pulled tight her scarlet hood. The evening was cold and blustery.

“This place gives me the willies,” she said.

“I think that’s Andy’s intention, if you get what I mean, right Andy?” Bud said.

“Shut up,” was the best I could come up with.

“I just meant that I think it’s kinda spooky,” Jane said. She linked arms and cuddled with Cassie. Cassie was Jane’s best friend, and my best friend’s girlfriend. Looking at them with their straight black hair, the two could have been sisters. Though I’m sure Little Red Riding Hood was no relation of Medusa. Jane was always the prettier one. Cass had a sort of tough-girl thing going on.

“I love old houses like this. It’s got character,” said Cass.

“So does Freddie Kruger. I wonder if this place has one of those big ol’ furnaces in the basement.” Bud bounced around the girls, pretending to claw at them.

“Look guys, it’s just a house like all the others around here,” I said. “Nobody’s living here, and it seems a little dark and empty. That’s all. If everyone would rather spend another evening conversing with Stinky Joe at the bowling alley…”

“Hell no,” said Bud. “If it’s a choice between Amityville and Stinky Joe I’ll be inside with the flies.”

“I’m not sure that Amityville has any more flies than Joe does, but Nanny’s house is fly free. I promise.” With that, I unlocked the shabby grey wooden door, and it opened with a mournful creak.

“Come on J, let’s go have some fun. It is Halloween after all,” Cass said.  As she led Jane into the house, a sudden gust of wind startled a crow into laughter.

Inside, I turned on the old brass standing lamp. There was light, but the bulb was old, and the light was dim. Bud helped me fetch and chop some logs to light the wood stove.

Jane looked for some blankets in the cupboard under the stairs while Cass set up bits of paper on a table in the middle of the room. One bit for each of the letters in the alphabet, then the numbers zero to nine, and finally one for yes and one for no. At the very center of the mahogany table was an upturned glass and a large candle.

Bud and I were by the back door when a shrill scream came from the hall followed by a dull thud.

“Wait a second. Listen. We should go check.” I made my way back to the sitting room. Jane was with Cass. She was shaking and her breathing was quick. Bud came lumbering in behind me.

“What was it? I totally dropped my doobie in a puddle. The weather’s turning f’ugly out there.”

“What’s going on? We heard a scream. Are you okay Jane?” I asked. I was briefly distracted by the new ladder that had formed in her tights.

“Jane, what happened? Are you okay?” asked Cass.

Jane took a deep breath and brought both of her hands up to her temples. “I found the cupboard under the stairs… but it was dark in there. I couldn’t find the light. There was just enough light from the hall to make out the blankets folded on the shelf at the back.”

“And when I reached in there, something moved. It brushed against my hand. It was gross.”

“It was a rat. I think. Anyway, I got such a shock that I stumbled and fell.”

“My Uncle Tony’s an exterminator, eh? He told me about rats the size of raccoons,” said Bud.

“Guys, let’s forget about it, it was nothing. . . you should get the fire lit and we can start having some fun,” said Jane. “Cass, here’s a blanket.”

“So, is everybody ready for this?” Cass said.

“Sure,” I said. “It isn’t as if anything is actually going to happen.”

“Aren’t you just a little creeped out?” said Jane. “I sort of want to go home.”

“Now everyone in the circle has to put one finger on the glass, then we try and make contact,” Cass said. She reached over the table to give Jane’s hand a reassuring squeeze.            “One thing though, if we do make contact, then nobody takes their finger off the glass, or leaves the circle without asking the spirit first.”

At first we just sat around, asking if there was anybody there, and nothing happened. Then, slowly at first, the glass slid across the table, making a sound like nails on a chalkboard. I remember how Jane went pale and her hand flinched slightly, but she kept her finger on the glass. A tear formed in her left eye. It glinted like a pearl as she looked to me, either for assurance or to make it all stop. I guess I still believed Cass was in control of the glass. She had taken the lead and seemed more exhilarated than frightened.

“Who are we talking to?” asked Cass.

The glass moved in a swooping motion around to the paper that said “No.”

My senses were heightened. I became aware of the sound of the old wall clock ticking in the hallway. I heard the wind blowing through the branches outside.  The wind wheezed, and the old oak groaned and rattled. I thought that I could hear the footsteps of spiders in the walls, and outdoors, the wriggling of earthworms in the garden’s dank soil. There was a smell like rotten milk. The weak light from the antique lamp flickered in time with the candles.

The glass was moving faster now, and it screeched as it started to sweep in a figure of eight motion. Bud’s bottom lip dropped and quivered, and he started to whimper. The glass moved to “six.”

All four of our fingers remained on the glass as it changed direction. It circled the table, leaving a scratch in the once-polished surface. It settled again, on “six.”

I looked at Cass and pleaded within that it was her pushing the glass. Her teeth clenched and a shiver ran visibly down the length of her spine.

“Spirit, I wish to leave this circle,” said Cass. Fear strangled the strength from her voice.

The glass swung to “Yes.” Then resumed its figure of eight motion.

Cass removed her finger from the glass, and in a single motion pushed back her chair, putting distance between herself and the table.

Only Jane and I were left touching the glass. Certain that Jane was not pushing it, I felt sick to my stomach.

“Please, can I take my finger away?”

I snatched my hand back. As I did so, the look in Jane’s eyes silently screamed, don’t you dare leave me alone. Don’t leave me.

Her finger remained as though stuck on the glass, yet barely touching. The glass moved, more fluidly than ever.

Bud and Cass were huddled against the back wall of the room.

I ran around the table and grabbed Jane’s shoulders, pulled her back. As her finger came away from the glass, it shattered. The clock stopped. Glass exploded around the room; a thousand razor-sharp diamond shards and 38 pieces of paper leapt into the air. I raised my hands to shield my face. When I removed them, Jane was gone. Cass was reaching out to her seat, but she was locked, fear-frozen. Jane had left the house with the front door wide open.

The wind rushed in and whipped and billowed the curtains. Its whistle became a shrill siren-yowl and from outside of the house came a grim, eldritch cry. A severed scream that was chased and cut down by silence. The ghoulish crow in the old oak tree laughed and cackled.  I ran to the door. In the darkness, I could just make out a red velvet flag flying by the wrought-iron fence.