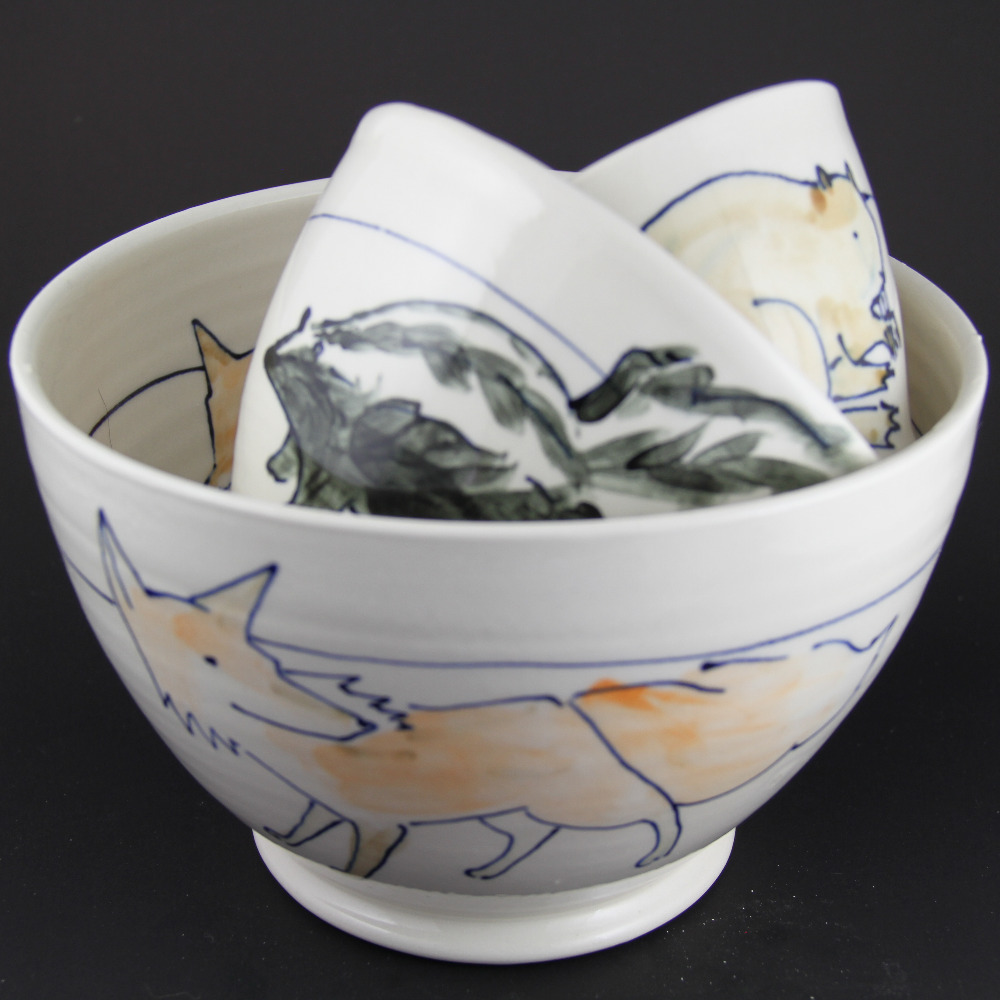 Sandwiched between the old Island Highway and Wallace Street is a gallery and classroom, dedicated to the development of ceramic arts. Facing Wallace Street, four floor-to-ceiling windows showcase pillars of pottery and ceramics, while to the right of the building a courtyard homes the large crowns of trees, flooded with sunshine.

In May of 2018, Bronwyn Arundel transformed the bright, open space into something that could host large workshops and show off the delicate skill of the artists that practice in it. The studio and gallery share the same roof and aqua-blue flooring, with the gallery of rotating wares facing the street and the studio opening to the yard.

Arundel had been working out of her own small studio previously to create her pottery and had been selling it through markets and at wholesale, but had plateaued in what she was able to create herself. To expand upon their creations, many potters take on extra hands. It was then she decided to open up the studio.

“I had to make a choice: either I hire another potter, an apprentice or something like that, and go that route, or go the route of teaching.”

Sensing a hole in the teaching opportunities in Nanaimo, Arundel began to brainstorm how she might host a workshop when her personal studio was much too small to be welcoming for students.

“I had been talking to other potters in the area and they felt the same way. I felt like the pottery community at least would welcome it, and I knew that the community centre classes filled up. It definitely felt like there was a space in the market to do it.”

After the successful crowdfunding campaign last spring, Arundel was able to set up her classroom area with pottery wheels and a clay maker and fill the gallery with the work of local potters and the studio’s Artist-in-Residence.

There are two routes that the Artists-in-Residence can take: Production Creation that allows for developing an image, body of work, and portfolio, and Business Development, which teaches the business plan and structuring of opening and running a small business.

The open-application programs are designed to offer potters who are looking for a new atmosphere, a place to sharpen their skillset or to expand a body of work. For Arundel, the addition of a resident artist means that she is able to continue working on her own pottery and the running of the shop. For the studio, the Artists-in-Residence work on their collections, as well as get first-hand experience operating a gallery and teaching a workshop.

The current Artist-in-Residence is Karisa Evdokimoff, who joined the program from mainland British Columbia in September. The program differs from other residencies across the world, where the apprentice would be doing scut work—routine labour around the studio—in exchange for a space to work and the knowledge of their instructor, a mentorship based in artistic prowess and professional development.

“It’s been incredible,” Evdokimoff said of her mentorship. “What sets this program apart, [is] there is the business part to it as well. So, artists who come here apply to this program aren’t going to make a body of work and then leave. They’re going to plan out what will happen after they leave. It’s for people who want to get serious about it and do it full time.”

Evdokimoff is able to instruct classes—such as February’s fairy house workshop—but is also able to work on her body of work. Her residence path has led her through classes and workshops to personal studio time that allows her to have a show at the end of the month, on April 26, in the gallery portion of the building.

As her mentor, teacher, and friend, Arundel said the show would feature Evdokimoff’s “organic sculptural vessels.”

Nanaimo Ceramic Arts Studio and Gallery is open for the general public to browse potter’s wares, as well as take classes. They offer six-session classes on the introduction of pottery, the pottery wheel, and hand building to create a foundation for the attendees regardless of their experience.

“We’re trying a new format this winter,” Arundel said of the workshops. “Twice a month there’s a Sunday workshop and it’s a full day. You can have minimal experience, but it’s set up so that those people who have more experience can really build on the skills and it’s fairly focused so if you don’t have experience you can learn.”

Arundel teaches workshops inspired by her own creations, which include sculpting and moulding animals from clay. Local potters Sandy Harquail and Bari Precious instruct workshops on soft slab patterns and expressive brush glazing.

There are other courses on offer, for those more hesitant with their pottery abilities. Their Make It nights are designed for casual attendees, often those who are surprised at their natural knack for the potter’s wheel.

“Every other Friday we do a one-off class; it’s either make a mug or make a bowl. You come in and you get taught how to make the one piece and we glaze it for you, and that’s really the intro for some people,” Arundel said.

Evdokimoff frequently teaches the evening classes and said that they are habitually attended as a date-night or by those who have just moved to the area and are looking to set up local artistic roots.

Nanaimo Ceramic Arts Studio and Gallery has a lot to celebrate as it nears its year-anniversary, including the Artist-in-Residence show and the invaluable structuring it has offered local potters of all ages and all abilities.