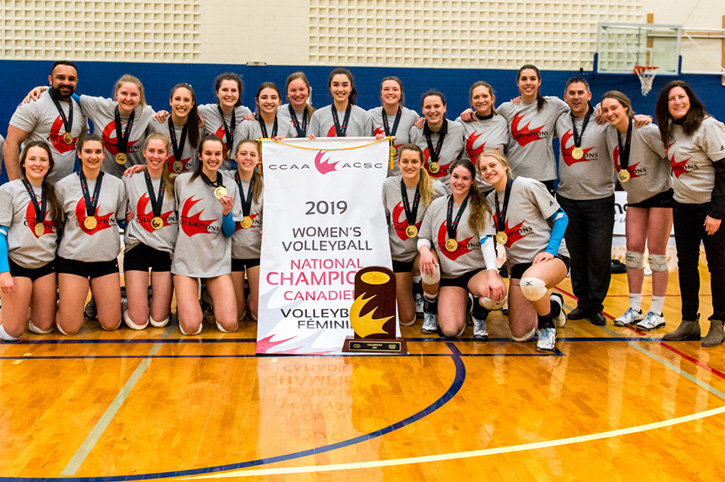 This season, the VIU Mariners women’s volleyball team became the first team in CCAA history to win back-to-back National Championships. This was their third National title in four years.

“It feels amazing,” Head Coach Shane Hyde said. “It’s awesome to be the first team to win back-to-back National Championships. We knew our team was good, but to put up that kind of a performance over the weekend was outstanding. To see the girls work that hard is all you could ask for as a coach.”

The Mariners opened the first set against the Eagles with a strong 25-18 win. From that point onwards VIU found their footing and did not let off the gas, winning the next two sets by an even wider margin.

Outside hitter, Karoline Tormena finished with 14 kills, two blocks, and eight digs. Tormena was named the Mariners Player of the Match for her performance.

Defensively, the Mariners were led by second-year outside hitter, Danielle Groenendijk, who finished with 13 digs and 16 kills. Middle blocker Taylor Wickson had eight kills and three blocks.

Fifth-year setter, Chantal Cummings was named most valuable player of the CCAA tournament.

“I was honoured to be named tournament MVP because there was so many amazing players there,” Cummings said. “It was also a great ending to my five-years at VIU.”

Cummings played a role in the success of the Mariners in both the 2018 and 2019 championships. Despite the National titles, what Cummings values most is the friendships and experiences she had with the Mariners.

“I believe the reason we were so successful was because of how we were such a tight knit family on and off the court,” Cummings said.

“One of the biggest things is the academics,” Hyde said. “We understand that they’re student-athletes and the student part is the top priority for us.”

During Nationals it is difficult for the students to strike a balance between their academics and their sport. This year was especially challenging due to the large number of snow days and weather-related class cancellations over the semester.

“Some of the girls missed over a month of school. Everyone hears this perception that student-athletes get helped out and that it’s easy for them, well, it’s the complete opposite,” Hyde said. “They’re writing tests on ferries, or have to write their tests earlier than everyone else to accommodate the sports side of things. This year for sure, out of all years, has been very difficult for our athletes.”

The majority of the team will be returning for next years’ season. For now, they’re enjoying time off, but will soon start preparing for a new year on the court. Despite becoming the biggest target in the league, Hyde says the Mariners are not planning to change anything about their approach to volleyball. Hyde was reluctant to comment on the possibility of a Mariners three-peat, but he is confident the Mariners will remain a top team.

“We’re going to have a strong team, I’ll leave it at that,” Hyde said. “With the players that we have coming back next year, I don’t see any reason why we wouldn’t be in that mix.”

Justin Shankaran also contributed to the reporting of this article.