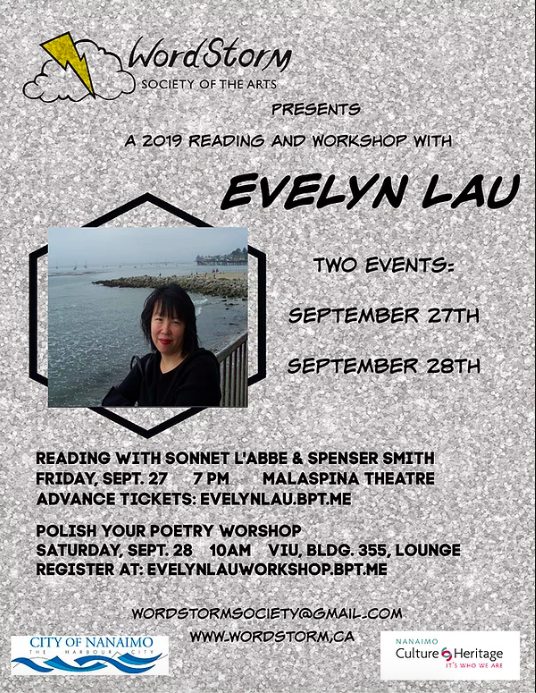 The Friday event will introduce Evelyn to audience members in the late evening as she reads from her acclaimed collection of poetry. The likes of which had recognized her with the Milton Acorn Award and the Pat Lowther Award. Her poems have appeared in hundreds of journals and anthologies, including numerous inclusions in Best Canadian Poetry. Her short stories, essays and novels have been translated into a dozen languages. Her memoir Runaway: Diary of a Street Kid (HarperCollins, 1989) was published when she was 18 years old.

Her poetry has been criticized as raw and compelling without shying away from emotional, dark themes. Reading alongside her is VIU professor Sonnet L’Abbé, fresh off the launch of her newest collection Sonnet’s Shakespeare, and alumni Spenser Smith, who has moved on to pursue an MFA in creative writing at the University of British Columbia.

Lau will be reading at the Malaspina Theatre, on VIU’s campus, from 7-9pm. Tickets at the door for students are $8.

Smith said of the upcoming event: “I’m super excited and honoured to read with poets as accomplished as Evelyn Lau and Sonnet L’Abbé. I promise at least one of my poems will mention perogies.”

Sonnet L’Abbé is the author of three previous collections of poetry, A Strange Relief, Killarnoe, and Sonnet’s Shakespeare. In 2000, she won the Bronwen Wallace Memorial Award for most promising writer under 35. In 2014, she was the guest editor of Best Canadian Poetry in English. Her work has been internationally published and anthologized.

VIU graduate Spenser Smith is a poet and wildlife photographer who lives in Nanaimo. His poems appear or are forthcoming in The Malahat Review, Prairie Fire, Contemporary Verse 2, The Puritan, and The Maynard. In 2017, he was the poetry winner of the Blodwyn Memorial Prize. He recently started the MFA in Creative Writing program at the University of British Columbia.

On Saturday, September 28th, Evelyn will be hosting a poetry workshop; Polish Your Poetry, The workshop will allow up and coming poets the opportunity to revisit their work, including insights from Evelyn into perfecting prose, line breaks, and word choice. There are currently 2 seats left for students at a reduced rate. ($25, instead of $50; contact WordStorm (wordstormsociety@gmail.com) or L’Abbé (Sonnet.L’Abbe@viu.ca) to save your self a seat and have an acclaimed poet look at your work!)

The event is put on by Nanaimo’s WordStorm and is their first special event of Fall 2019. Advance ticket for Evelyn’s reading and workshop are at the links provided.  More information can be found through WordStorms website.